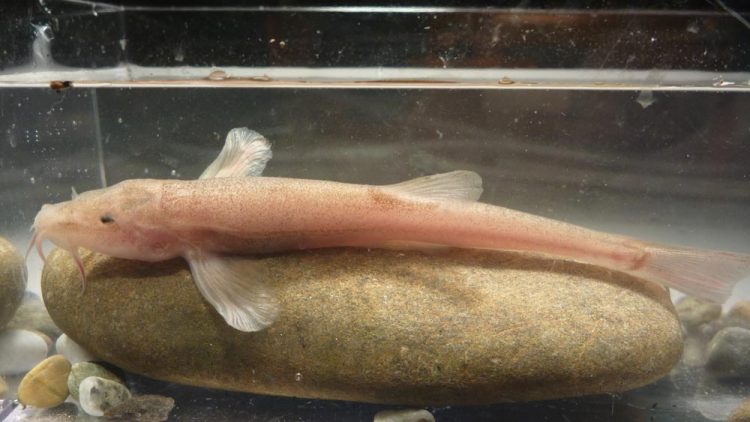 Few animals live so hidden away, as those who make their homes underground. In Europe, there is a rich fauna in caves, in the underground and in the groundwater that hardly anyone knows. However, to date this fauna did not include any fishes in Europe, although cave fishes have been found on many other continents.

Scientists have long speculated about the reasons for this. A team of cave divers and researchers from the Universities of Konstanz and Oldenburg/Max-Planck Institute for Evolutionary Biology Plön and the Leibniz-Institute of Freshwater Ecology and Inland Fisheries Berlin have now discovered the first cave fish in Europe.

At the same time, the newly discovered fish is the most northerly cave fish in the world. It wasn't found in the Balkans where most of the European cave-dwelling species live, but in an area that would not have occurred to anyone – in Germany.

“We assume that there is a large population of cave fishes in the 250 square kilometre underground karst water system where percolating water from the Danube flows to the Aach spring north of Lake Constance,” reports Dr Jasminca Behrmann-Godel, University of Konstanz.

To find cave fish at all in such a northern region of the earth is completely unexpected. It was assumed that cave fish are only found in areas where the ice-age glaciers hadn't buried every living thing under their path. The results presented by the research team suggest that the newly discovered cave fish, a loach, did in fact first broach the darkness after the end of the ice age and thereafter became a troglodyte (cave dweller).

“It was only when the glaciers retreated that the system first became a suitable habitat for fishes. They must have moved there at some point following the end of the Würm glacial period, a max. of 20,000 years ago and seemingly from the Danube. Our genetic analyses are very clear on this,” mentions Professor Arne Nolte from the University of Oldenburg/Max-Planck Institute for Evolutionary Biology Plön.

“In this short period of time from an evolutionary perspective the fishes have developed into real cave fish. Their eyes are much smaller than in surface fish, almost as if they were curved inwards and their colouring has almost disappeared. The fish have elongated projections on their heads, so-called barbels, and their nostrils are larger than those of their cousins who live closer to the surface,” explains Dr Jörg Freyhof from the Leibniz Institute for Freshwater Ecology and Inland Fisheries (IGB) Berlin.

There are no predators within the cave fish’s environment, so that life far below the surface is very safe for the loach. Small cave crustaceans and cave snails have also been detected in the underwater passages. They most likely provide the fishes with their staple diet.

“Diving in this area is for real professionals. For instance, on the way there is a “siphon shaft” that descends vertically for 40 metres. The divers use special air mixtures here to shorten the decompression time on the return journey. Poor visibility due to stirred up mud from the current also makes things a lot more tricky,” says Joachim Kreiselmaier, who discovered the first cave loaches during one of the three-hour dives in August 2015.

The underwater system of the Danube drainage area between Immendingen and Möhringen up to the Aach spring resembles a flooded, labyrinth-type tunnel system. It’s only 12.5 kilometres linear distance, which the water runs off from across a sloping horizontal underground area. “We don't know exactly what the system looks like but there must be further underground rivers and lakes,” supposes Roland Berka, who has studied the geological formation of the region for many decades.

It's precisely the recent evolutionary history of the fishes that is interesting for future research. The research team has chanced on a real treasure here, in terms of gaining a better understanding of the evolution of rapid adjustments. The spectacular discovery also shows that new things can still be found, even in Germany, one of the most widely researched countries in the world.

Facts:
• With the exception of the siphon shaft, the system is a max. of 22 metres deep and 600 metres long from the entrance in the Aach spring to the collapse.
• Including all the side passageways, it is estimated as being one kilometre in length.
• The project was sponsored by University of Konstanz, the Max-Planck-Gesellschaft and the ERC Starting Grant “Evolmapping” for Professor Arne Nolte.