AI material that learns behaviors and adapts to changing conditions 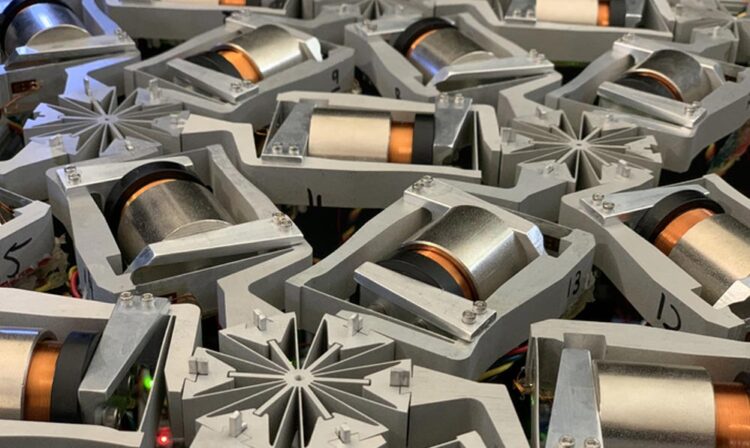 Photo of a mechanical neural network (MNN). Currently, the system is about the size of a microwave oven, but the researchers plan to simplify the MNN design so that thousands of the networks can be manufactured on the micro scale within 3D lattices for practical material applications.
Credit: Flexible Research Group at UCLA

Just like a pianist who learns to play their instrument without looking at the keys or a basketball player who puts in countless hours to throw a seemingly effortless jump shot, UCLA mechanical engineers have designed a new class of material that can learn behaviors over time and develop a “muscle memory” of its own, allowing for real-time adaptation to changing external forces.

The material is composed of a structural system made up of tunable beams that can alter its shape and behaviors in response to dynamic conditions. The research finding, which boasts applications in the construction of buildings, airplanes and imaging technologies among others, was published Wednesday in Science Robotics.

“This research introduces and demonstrates an artificial intelligent material that can learn to exhibit the desired behaviors and properties upon increased exposure to ambient conditions,” said mechanical and aerospace engineering professor Jonathan Hopkins of the UCLA Samueli School of Engineering who led the research. “The same foundational principles that are used in machine learning are used to give this material its smart and adaptive properties.”

When the material is placed in aircraft wings, for example, it could learn to morph the shape of the wings based on the wind patterns during a flight to achieve greater efficiency and maneuverability of the plane. Building structures infused with this material could also self-adjust the rigidity in certain areas to improve their overall stability during an earthquake or other natural or manmade disasters.

Utilizing and adapting concepts from existing artificial neural networks (ANNs), which are the algorithms that drive machine learning, the researchers developed the mechanical equivalents of ANN components in an interconnected system. The mechanical neural network (MNN), as the team called it, consists of individually tunable beams oriented in a triangular lattice pattern. Each beam features a voice coil, strain gauges and flexures that enable the beam to change its length, adapt to its changing environment in real time and interact with other beams in the system.

The voice coil, which gets its name from its original use in speakers to convert magnetic fields into mechanical motion, initiates the fine-tuned compression or expansion in response to new forces placed on the beam. The strain gauge is responsible for collecting data from the beam’s motion used in the algorithm to control the learning behavior. The flexures essentially act as flexible joints among the moveable beams to connect the system.

An optimization algorithm then regulates the entire system by taking the data from each of the strain gauges and determining a combination of rigidity values to control how the network should adapt to applied forces.

In order to check the validity of the strain gauge-monitored system, the research team also used cameras trained on the output nodes of the system.

Early prototypes of the system exhibited a lag between the input of the applied force and the output of the MNN response, which affected the system’s overall performance. The team tested multiple iterations of the strain gauges and flexures in the beams as well as different lattice patterns and thicknesses before achieving their published design that managed to overcome the lag and accurately distribute the applied force in all directions.

“Identifying the reasons why [the networks] failed to learn is important for understanding how to design MNNs that successfully learn,” the researchers shared how they solved the problem through trial and error over the past five years.

Currently, the system is about the size of a microwave oven, but the researchers plan to simplify the MNN design so that thousands of the networks can be manufactured on the micro scale within 3D lattices for practical material applications. Aside from using the material in vehicles and construction materials, the researchers suggest MNNs could also be incorporated into an armor to deflect shockwaves, or in acoustic imaging technologies to harness soundwaves.

The paper’s lead author Ryan Lee is a mechanical and aerospace engineering doctoral student and member of Hopkins’ Flexible Research Group at UCLA. Erwin Mulder of the University of Twente in Enschede, Netherlands, also worked on the research, which was supported by grants from the Air Force Office of Scientific Research.