Home / Ecology, The Environment and Conservation / Mechanism that can cause collapse of great Atlantic circulation system
19.10.2022

Mechanism that can cause collapse of great Atlantic circulation system 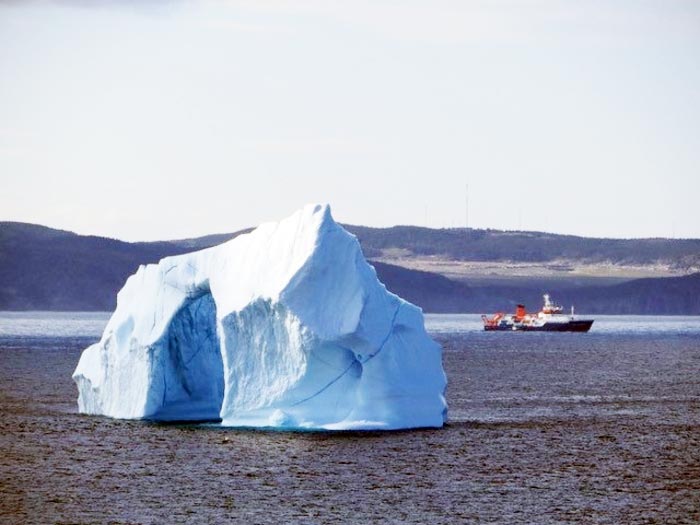 Iceberg in the working area off Newfoundland, Canada, with the research vessel in the background.
Credit: Lars Max

The process is associated with warming of the ocean subsurface resulting in a reduction of surface salinity due to the release of huge iceberg armadas from glaciers.

The Atlantic meridional overturning circulation (AMOC), a system of ocean currents that carry warm water from the tropics into the North Atlantic and transport cold water from the northern to the southern hemisphere, is a fundamental mechanism for the regulation of Earth’s climate. The conveyor belt has collapsed in the past owing to natural factors. The most recent collapse played a key role in the last deglaciation. AMOC is now threatened by global warming, scientists have shown, and a new study has discovered the sequence of past breakdown events.

The study was conducted by German researchers and Brazilian paleoclimatologist Cristiano Mazur Chiessi, a professor at the University of São Paulo’s School of Arts, Sciences and Humanities (EACH-USP) in Brazil. An article reporting their findings is published in Nature Communications.

“An investigation of marine sediments collected between Canada and Greenland led to the discovery that, in the past, glaciers covering the territories that now correspond to Canada and the northern United States released colossal numbers of icebergs into the Atlantic owing to ocean surface warming in the region,” Chiessi told Agência FAPESP.

The icebergs melted in the ocean and deposited continental sediments on the seabed. “Identification of these sediments and reconstitution of the subsurface temperature in the region enabled scientists to establish for the first time that subsurface warming preceded the mass iceberg release,” he said.

The enormous volume of fresh water added by the melting of the icebergs modified the composition of the ocean at high latitudes of the northern hemisphere. This had a tremendous impact on the global climate because the region between Canada and Greenland is a particularly sensitive part of AMOC.

“This gigantic conveyor belt carries lighter, warmer surface water from the South Atlantic to the North Atlantic. At high latitudes of the North Atlantic, this surface water releases heat into the cold atmosphere, becoming heavier and sinking down the water column. The deeper, colder and denser water then flows southward again until it reaches the vicinity of Antarctica, where it returns to the surface, forced by an intense upwelling. On the surface, it warms up, loses density and completes the circulation,” Chiessi said.

AMOC does not only transport a huge volume of water, amounting to some 18 million cubic meters per second. It also conveys a massive amount of energy, equivalent to about 100,000 times the power generated by Itaipu, the world’s second-largest hydroelectric plant, on the Brazil-Paraguay border. The spatial distribution of this energy influences the climate in several parts of the planet, including Brazil. Vigorous circulation maintains the climate as we know it, while its collapse causes a pronounced redistribution of energy, altering the climate.

The study was conducted as part of a project led by Chiessi and supported by FAPESP via its Research Program on Global Climate Change (RPGCC).

AMOC collapsed several times during the last glacial period, between about 71,000 and 12,000 years before the present (BP). Other studies led by Chiessi and based on an analysis of marine sediments collected between the coast of Venezuela and Northeast Brazil, showed that these collapses caused a torrential increase in rainfall in Northeast Brazil and a sharp drop in rainfall in Venezuela and the far north of Amazonia. Decreasing rainfall has also been described in tropical areas of North Africa and Asia.

By discovering that North Atlantic subsurface warming at high latitudes preceded massive release of icebergs from Canada and the US into the Atlantic, the researchers were able to establish the sequence of events responsible for the collapse of AMOC.

“The process begins with an apparently insignificant weakening of AMOC, which causes subsurface warming at high latitudes of the North Atlantic. This warming melts the glaciers’ sea snouts, moving the glaciers rapidly seaward and releasing colossal armadas of icebergs. As the icebergs melt, surface water salinity decreases in the region. The surface water isn’t dense enough to sink, and AMOC collapses,” Chiessi said.

Monitoring of AMOC in recent decades shows that it is weakening. There are three main reasons: intensification of rainfall at high latitudes of the North Atlantic; melting of the ice cap over Greenland; and warming of the planet’s surface. All three causes are associated with the rising levels of greenhouse gases in the atmosphere due to human activity (more at: agencia.fapesp.br/23134/).

This latest discovery suggests the weaker AMOC will cause anomalous subsurface warming at high latitudes of the North Atlantic, which will melt glacier sea snouts in Greenland. Ultimately, this could lead AMOC to collapse, exacerbating the climate crisis with major repercussions.

The São Paulo Research Foundation (FAPESP) is a public institution with the mission of supporting scientific research in all fields of knowledge by awarding scholarships, fellowships and grants to investigators linked with higher education and research institutions in the State of São Paulo, Brazil. FAPESP is aware that the very best research can only be done by working with the best researchers internationally. Therefore, it has established partnerships with funding agencies, higher education, private companies, and research organizations in other countries known for the quality of their research and has been encouraging scientists funded by its grants to further develop their international collaboration. You can learn more about FAPESP at www.fapesp.br/en and visit FAPESP news agency at www.agencia.fapesp.br/en to keep updated with the latest scientific breakthroughs FAPESP helps achieve through its many programs, awards and research centers. You may also subscribe to FAPESP news agency at http://agencia.fapesp.br/subscribe