"We're hoping for up to 600 kilometers per hour" 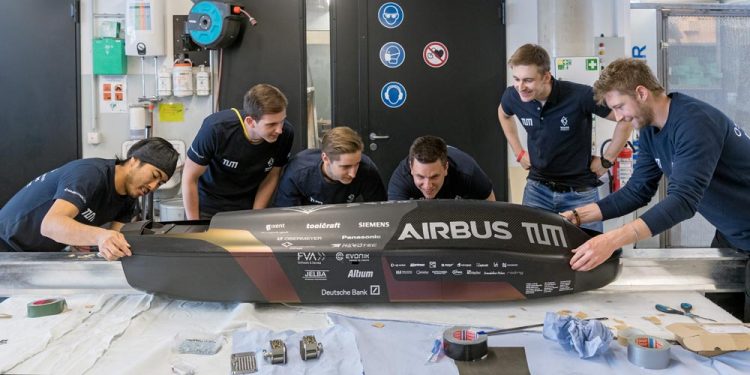 We're taking it in stride. Of course expectations are very high; we still want to be better than this year's competition. But this pressure doesn't result in stress for the team, much more it increases our motivation.

You were on board last year as well. What motivated you to sacrifice another year of your free time for the Hyperloop project?

The project really is very time-intensive, but it's also a lot of fun. On top of that, we're learning things that don't come up in normal studies, for example project management and working together with colleagues from other disciplines. I'm a physicist myself, but the team also includes many mechanical engineers, electrical engineers, information scientists and business economists. There are a total of over 40 students on the team. And the only way to realize a pod that has a chance of winning is when we all contribute our knowledge.

Is this interdisciplinary collaboration the secret to success?

The fact that the team includes students from many different disciplines is of course a great advantage, since each of us comes with the expertise from his or her own curriculum. Our “secret”, though, is primarily the fact that so many people on the team have decided to invest so much time in the project. Building a pod like this is very complicated and it wouldn't work if so many people weren't working on the project full-time in spite of their studies.

What did you do this year that was different from last year?

The requirements of the competition are different: This year all pods that drive through the test track's tube in Los Angeles will have to have their own drives. That was optional in the previous years, it was also possible to use SpaceX technology. But we've had our own drive since 2017. This meant we were able to further develop our concept in principle. But we've still thoroughly revised and optimized the design as well as the drive.

What were the biggest challenges you faced?

We had to reduce weight while increasing drive performance at the same time. We succeeded by building the new model from lightweight carbon fiber-reinforced composite materials. We also replaced the 50 kilowatt electric motor from last year's design with eight small motors, each of which drives one wheel. This increased the power performance to 240 kilowatts, or 320 horsepower. At under two meters in length, the new pod is shorter than its predecessor and has an aerodynamically optimized shape.

Where was the new pod built?

Like its predecessors, the new pod was built in the MakerSpace at TUM's UnternehmerTUM innovation center in Garching. In addition, many of the vehicle's parts were manufactured by external partners. Working together with experts from industry was a great help to us when it came to improving the pod's performance.

How fast is the third pod?

We won't really see until we're actually on the test track. Up to now we've only conducted simulations and investigations on the test stand. We're hoping for up to 600 kilometers per hour.

The sounds pretty fast, but it's still a long way from Elon Musk's objective of having the Hyperloop transport passengers at 1200 kilometers per hour…

This goal can't be achieved on the test track. The tube in front of the SpaceX building in Los Angeles is only 1.2 kilometers long, and the pod has to accelerate to full speed and then brake again within this distance. This is a gigantic challenge: Our pod accelerates five times faster than an airplane during take-off.

With its length of almost two meters and a height of almost 30 centimeters, the pod is also much too small to transport passengers. Is the technology you've developed suitable for constructing larger passenger compartments?

Not directly. The technology is still in the development phase and our prototypes are built with the initial objective of testing various technologies. However, this way we can contribute to making the Hyperloop vision a reality one day. That's why we decided this year to build a second prototype in addition to the pod for the competition. We want to explore other systems, in particular levitation systems and frictionless drive systems, which in our opinion will be very significant for the competition and for the further development of Hyperloop technology in the future.

Other than congratulations, what is there to win?

A trophy. We already have two of them: They're 3D printed models of the tube with a pod, signed by Elon Musk personally. They're on display in our office. I hope we'll soon be able to add a third one.

WARR Hyperloop is a project of the student initiative WARR (Scientific Workgroup for Rocketry and Spaceflight), which has been active at the Technical University of Munich in the field of aviation and astronautics since 1962. The current WARR Hyperloop team is led by Gabriele Semino, Martin Riedel, Florian Janke and Joachim Sturm. The WARR Hyperloop team received financial support from TUM. For other sponsors visit: http://hyperloop.warr.de/sponsors/

https://mediatum.ub.tum.de/1446039 Pictures for editorial use