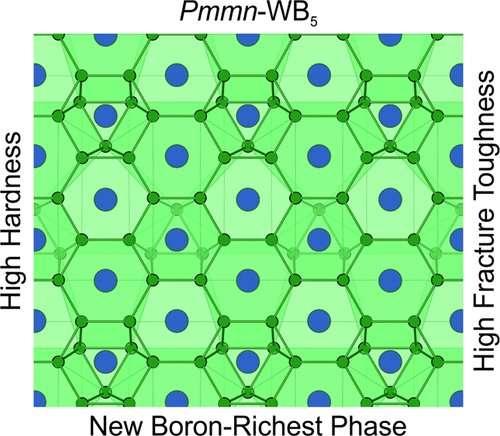 Superhard substances have a broad scope of application spanning well drilling, machine building, metalworking, defense industry, surgery and many other fields. The hardest known material, diamond is an unaffordable luxury in many applications.

Its distant competitor, pobedit, has remained unrivaled for the last 80 years. Developed in the 1930s, it was used during the Second World War to make anti-tank shell caps (the word 'pobedit' is actually derived from the Russian 'pobeda' which means victory) and has been used for decades to manufacture drill bits for the drilling rigs. Harder materials either require higher-pressure synthesis or have much lower fracture toughness.

A team of Skoltech scientists led by Professor Artem Oganov used their USPEX evolutionary algorithm to predict a new material, WB5, that can be synthesized at normal pressure and can successfully compete with pobedit in the two most essential parameters ? hardness and fracture toughness ? which are 50% higher and 20% lower, respectively, for WB5 as compared to pobedit.

The new material is a previously unknown compound that can be easily obtained under normal conditions. The Skoltech scientists performed their study within the framework of Gazprom Neft's large-scale project aimed at creating new materials for drilling applications.

“Before we discovered the new material, we had studied a lot of systems on the computer, trying to predict stable chemical compounds and calculate their properties. These were quite interesting substances, although they could hardly compete with pobedit. At some point I thought we would never beat pobedit which has stood its ground for almost a century ? and for good reason. But suddenly we saw a glimmer of hope and soon found a unique compound, WB5,” says the study lead Artem Oganov.

“The tungsten-boron system has been the subject of a multitude of experimental and theoretical studies, and it is surprising that this compound has not been discovered till now,” says the first author Dr. Alexander Kvashnin.