WHO handrub formulations are effective against emerging viruses 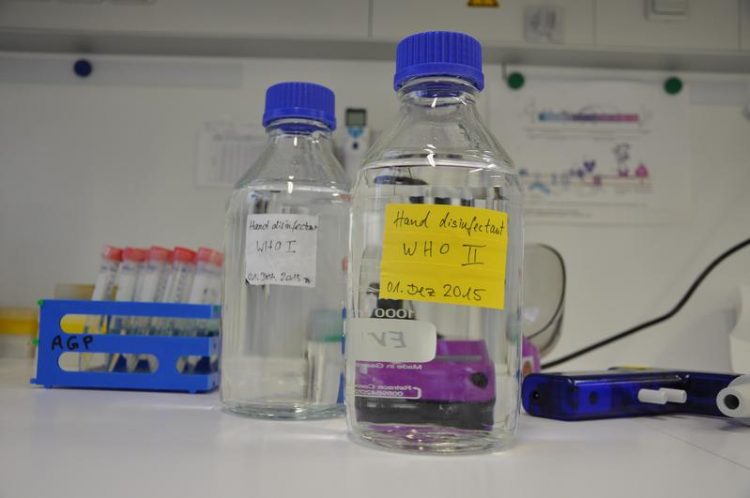 Last year, the World Health Organization WHO declared “A Public Health Emergency of International Concern” associated with the outbreak of Zika virus. In 2014 and 2015, according to a report by the Robert Koch Institute, 11,000 people in West Africa died of Ebola. In 2012 the MERS virus was detected for the first time – after the SARS epidemic in 2003, a further coronavirus, which triggers a respiratory syndrome.

Disinfectants are indispensable to reduce the potential risk of infection among the volunteers, medical staffs and people who are living in crisis zones. Antiseptic handrubs are one of the most important measures to limit the pathogen transmission. Since years, the WHO has been providing two antiseptic handrub formulations based on simple materials that could be self-mixed.

The sum of all material for each formulation, the ethanol based formulation I or the isopropanol based formulation II, cost only one tenth of the price of the branded product. Scientists at TWINCORE have now demonstrated that these WHO handrub formulations are effectively acting as disinfectants against the well-known infectious agents as well as those emerging and re-emerging viruses.

“The effect of both antiseptic formulations was never verified against Ebola virus, Zika virus and Coronaviruses. The WHO also consciously has not issued a recommendation for the application of these handrub formulations against those viruses”, says Prof. Eike Steinmann, head of the Research Group Virus Transmission at the Institute for Experimental Virology.

“However, a huge amount of those handrub formulations are in use and we wanted to confirm, whether those formulations could protect the people in crisis zones.” “We” is an international consortium which was coordinated by Eike Steinmann, as the investigated viruses were studied in selected laboratories of the highest safety level in Germany, Switzerland and South Korea.

This comparative study with international partners has now shown that the WHO developed handrub formulations also protect against these new viruses. The air-borne SARS and MERS viruses as well as the vector-transmitted Zika virus are the most labile ones against the WHO antiseptics. The stability of Ebola virus is moderate. “We have also included the vaccinia virus, as it is used as a test virus for the determination of the disinfectant efficacy against enveloped viruses,” says Eike Steinmann.

The vaccinia virus is notably stable – if an antiseptic handrub is proved to be potent against this virus, it is also effective against all other well-known enveloped viruses. The study also confirms it as a reference virus when considering the emerging viruses tested in the study. “Even though the results were almost to be expected – knowing that Ebola virus could really be inactivated by both WHO formulations, is important as a fundament for their application in crisis zones”, concludes Eike Steinmann.