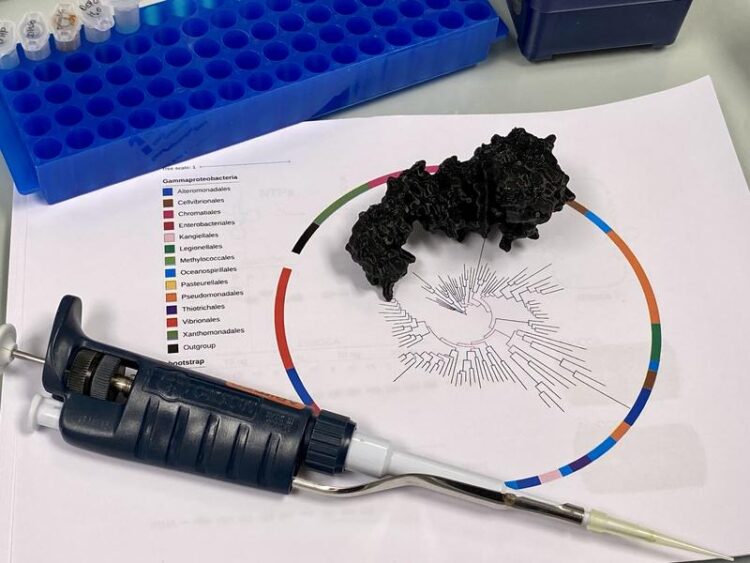 Caption: This is what a phylogenetic tree looks like whose origin (middle) goes back two billion years. The tips of the branches each represent the enzyme of a modern organism.
Photo: Diana Smikalla

Basic researchers at Leipzig University have solved a puzzle in the evolution of bacterial enzymes. By reconstructing a candidate for a special RNA polymerase as it existed about two billion years ago, they were able to explain a hitherto puzzling property of the corresponding modern enzymes. Unlike their ancestors, they do not work continuously and are thus significantly more effective – these pauses in activity constitute evolutionary progress. The reconstruction of the protein from prehistoric times was made possible thanks to interdisciplinary cooperation between molecular biochemistry and bioinformatics.

The research findings have been published in the renowned journal “Molecular Biology and Evolution”. The enzymes studied are tRNA nucleotidyltransferases: enzymes that attach three nucleotide building blocks in the sequence C-C-A to small RNAs in the cell (so-called transfer RNAs) so that they can subsequently supply amino acids for protein synthesis. Through phylogenetic reconstructions, a team of researchers led by Professor Mario Mörl (Biochemistry) and Professor Sonja Prohaska (Bioinformatics) reconstructed a candidate for such an ancestral enzyme as it existed in bacteria about two billion years ago. The research team then compared the properties of the reconstructed RNA polymerase with those of a modern bacterial enzyme.

Both enzymes work with similar precision, but display clear differences in terms of reaction. Until now, it was not possible to recognise the tendency of modern enzymes to repeatedly interrupt their activity as an evolutionary advantage. This phenomenon had puzzled biochemists for decades. It was only in comparison with the mode of activity of the reconstructed enzyme, that the mystery has now been solved. The ancestral enzyme is processive, i.e. it works without interruption, but every now and then removes nucleotide building blocks that have already been correctly added. The results show that much can be learned about the evolution and properties of modern enzymes from enzyme reconstructions, and that many questions can only be solved through interaction between bioinformatics and biochemistry – in a back and forth between computer calculations and laboratory experiments.

Shimmying into the past by tracing relationships

Using gene sequences, evolutionary phylogenetic trees can also be created of bacteria. Starting from today’s broad diversity of organisms in a species tree, the evolutionary path of individual genes can be reconstructed along relationships and branches, and painstakingly traced back to a common origin.

The reconstruction is essentially a three-step process. First, databases are searched for corresponding modern enzymes in order to be able to examine the sequence of amino acid building blocks. The sequences obtained can then be used to calculate what the original sequence should have looked like. The corresponding gene sequence coding for the old enzyme is then introduced into laboratory bacteria so that they form the desired protein. The enzyme can then be studied in detail to determine its properties and compared with modern enzymes. “When the news came back from the lab that the reconstructed enzyme performs the C-C-A addition, and does so even in a wider temperature range than today’s enzymes, that was the breakthrough,” Sonja Prohaska recalls.

Like organisms, enzymes are also optimised through evolution. The work (catalysis) performed by an enzyme usually runs faster and better the stronger it can bind its substrate. The reconstructed ancestral enzyme does precisely that, it holds on to the substrate, the tRNA, and attaches the three C-C-A nucleotides one after the other without letting go. Modern tRNA nucleotidyltransferases, on the other hand, are distributive, i.e. they work in stages with pauses during which they repeatedly release their substrate. Nevertheless, they are more efficient and faster than their ancestral predecessors. This puzzled the researchers. Why do modern enzymes keep letting go of their substrate? The explanation lies in the phenomenon of the reverse reaction, in which the incorporated nucleotides are removed again by the enzyme. While the strong binding of the ancestral enzyme to the substrate results in subsequent removal, the reverse reaction in modern enzymes is almost completely prevented by letting go of the substrate. This allows them to work more efficiently than their predecessors.

“We have now finally been able to explain why modern tRNA nucleotidyltransferases work so efficiently despite their distributive nature,” says Mario Mörl. “The finding took us in the team completely by surprise. We didn’t expect anything like this. We had the question 20 years ago and now we can finally answer it using bioinformatics reconstruction methods. This close cooperation between bioinformatics and biochemistry has existed in Leipzig for several years and has proven, not for the first time, to be a great advantage for both sides.”