Combined and efficient: Two steps to the goal 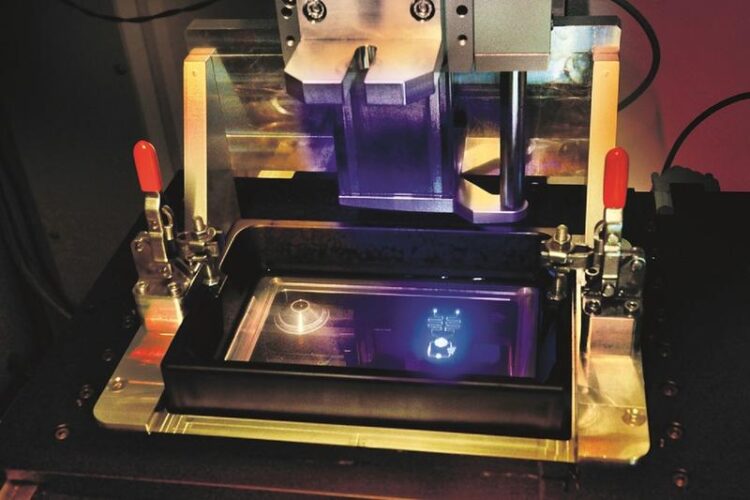 Together with industrial partners, the Fraunhofer Institute for Laser Technology ILT has developed a novel system for producing high-resolution microcomponents by photo-crosslinking. Thanks to their work in the project “High productivity and detail accuracy in additive manufacturing by combining UV polymerization and multiphoton polymerization – HoPro-3D,” polymer microstructures can now be produced economically and customized in one machine.

The experts at the Fraunhofer ILT worked together with LightFab GmbH from Aachen, Bartels Mikrotechnik GmbH from Dortmund and Miltenyi Biotec GmbH from Bergisch Glabach in the “HoPro-3D” project. There they developed a new type of 3D printer that combines fast two-dimensional exposure – scrolling digital light processing (DLP) – with a high-resolution laser process – multiphoton polymerization (MPP) – to produce microcomponents from photopolymers.

The HoPro-3D 3D printer has two selectable exposure systems, for either high build rates (scrolling DLP) or high precision (MPP). The DLP module, which emits at a wavelength of 365 nm, exposes the basic structures of a microcomponent with a pixel resolution of 10 µm. As a complement, a femtosecond laser and the MPP module can be used to write contour lines with a resolution of about 2 µm.

The layer-by-layer approach makes it possible to build the finest MPP structures on top of already printed DLP structures, thus quickly creating extended components with a complex structure and high-resolution details. The built-up laboratory pattern allows the production of components with a footprint of up to 60 x 100 mm².

“The concept is in place and the corresponding machine has been built and already extensively tested,” reports Dr. Martin Wehner, Head of the Biofabrication Group at Fraunhofer ILT. After completion in spring 2022, the laboratory prototype could already be tested and optimized in an application-oriented manner as part of the Fraunhofer SiCellNet network. The SiCellNet cluster forms a central point of contact for research into new tools and manufacturing techniques for the analysis, sorting and provision of living cells. The performance of the combination plant and the control of the process could thus be optimally expanded.

In the follow-up project “Precise assembly by high resolution seamless 3D printing – PANDA,” funded by the SME Innovation Program, the Fraunhofer ILT team has been expanding the performance of DLP-based processes since January 2022. The knowledge gained there will later be applied in the HoPro-3D system to continuously improve the economic efficiency of the 3D printing process.

The Fraunhofer ILT is able to build microchannel structures to develop customer-specific applications in a time- and cost-saving manner. Since there is no need to switch between different machines, smaller functional elements can be integrated directly into larger components. In addition, thanks to increased precision of the MPP process, a high local functional density of microscopic structures can be integrated into components during production.

The HoPro-3D project ran from November 2018 to December 2021, was coordinated by Fraunhofer ILT and funded by the European Regional Development Fund (ERDF).