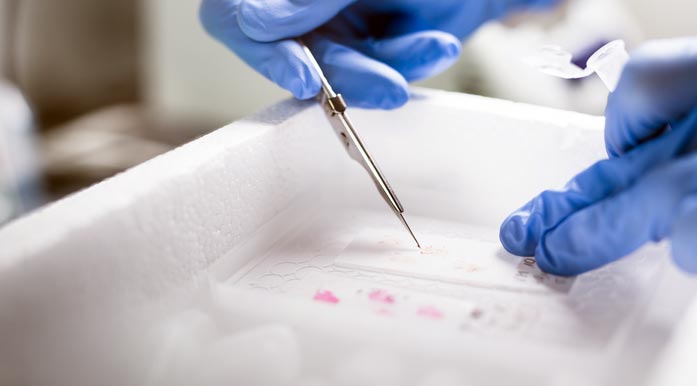 Preparing the tumor tissue for sequencing: In order to enable a highly sensitive analysis of genetic heterogeneity, the researcher only included regions with a high concentration of live tumor cells. These were isolated from frozen tumor tissue sections using a scalpel.
Credit: Charité l Linda Ambrosius

Study on genetic changes in neuroblastoma.

Tumors are heterogeneous, which means that different parts of the same tumor can be genetically distinct. This phenomenon, known as intratumor heterogeneity, is steadily gaining in significance within the field of cancer research. Cellular and molecular differences within the same tumor play an important role in many different cancers due to their implications for diagnosis and the use of targeted therapies.

According to a recently published study by Charité, the MDC and the German Cancer Consortium (DKTK), this also applies to neuroblastoma, a malignant solid tumor of the peripheral nervous system which is relatively common in children. Neuroblastomas develop from groups of unmature nerve cells mostly in the adrenal glands or along the spine, from where they expand into the abdominal cavity.

Summarizing the researchers’ key findings, the study’s first author, Dr. Karin Schmelz of Charité’s Department of Pediatric Oncology and Hematology, says: “In our study, we were able to show that the genetic changes typically associated with neuroblastoma can both disappear and emerge over the course of the disease. These mutations are not evenly distributed throughout the tumor; rather, they occur in distinct sections or even in individual cells, giving the tumor a mosaic-like appearance.”

“Cancer is driven by evolutionary processes,” says Dr. Roland Schwarz, Group Leader of the MDC’s Evolutionary and Cancer Genomics research group  and one of the study’s last authors, Cancer cells undergo constant genetic change; they are engaged in a fight for survival, including against other cancer cells. Each cancer has its own phylogenetic tree, which depicts the way in which a tumor evolves; some cancer cells become metastatic, while others develop treatment resistance.

The researchers analyzed a total of 140 neuroblastoma samples. The biopsy samples were collected from 10 pediatric patients at various points during the clinical course and covered multiple tumor regions. Sample analysis involved the use of multiple modern sequencing techniques followed by computer-assisted evaluation.

The researchers focused their analysis on the neuroblastoma-associated genes ALK, MYCN and FGFR1, which play an important role in both clinical course and treatment. According to their results, changes in the ALK and MYCN genes were not present continuously throughout the course of the disease, nor were they found in all tumor cells. Changes in the ALK and FGFR1 genes can offer useful treatment targets, particularly in relapsed patients. The researchers found that, in some patients, ALK mutations which were present at the time of diagnosis had disappeared by the time the tumor was surgically removed. Furthermore, changes in the FGFR1 gene were only found in distinct tumor regions. The researchers were also able to identify an instability in the number of gene copies present in neuroblastoma cells. In some cases, cancer cell clones showed early divergence from the primary tumor, breaking away to infiltrate other organs where they formed metastases.

“The process of recording detailed spatial and temporal changes in the copy numbers of specific genes is extremely complex,” explains bioinformatics expert Dr. Schwarz. Notwithstanding these challenges, his research group developed an algorithm capable of producing a precise reconstruction of these copy numbers. In 2020, Dr. Schwarz and his international colleagues used this method to produce evidence of continuous structural evolution in a range of different cancers. “We have now been able to extend this to neuroblastoma, where we were able to show in detail how the cancer genome undergoes structural changes,” says Dr. Schwarz.

Last author Prof. Dr. Angelika Eggert, Head of Charité’s Department of Pediatric Oncology and Hematology, explains: “We are now in a better position to understand how neuroblastoma cells behave. This knowledge is essential in relation to patients who suffer a recurrence of their disease because their treatment often requires the use of personalized and targeted therapies. When a tumor presents as genetically heterogeneous, targeted molecular therapy may well capture a majority of the abnormal tissue but, crucially, will not capture all of the affected cells. The cancer will then be able to regrow from those remaining cells.”

Explaining the significance of their research in light of existing knowledge, Prof. Eggert says: “Our findings have less relevance for neuroblastoma diagnosis and therapy selection. This is because diagnosis is already reliable, thanks to technologies that have undergone decades of testing, such as imaging, urine testing and single tissue biopsies, and because chemotherapy targeting fast-growing cells remains the treatment of choice for the primary tumor. However, if the disease recurs following treatment, targeted treatment options become particularly important. Treatment selection which is based on a single tissue biopsy from a single tumor region is unlikely to adequately address the tumor’s genetic heterogeneity. When a relapse occurs, we should therefore consider using state-of-the-art sequencing techniques to analyze tumor tissue samples harvested from multiple regions. This would provide us with as much detail as possible about the disease, enabling us to further improve the decision-making process pertaining to the selection of personalized therapies.”

The researchers are now testing other methods in the hope of resolving some of the technical challenges which remain. These include the use of single-cell-based technologies and liquid biopsies, a new type of blood test which analyzes genetic information shed by tumors into the bloodstream. Using the analysis of multiple blood samples over the course of disease, these techniques will provide evidence of any genetic changes taking place – without the need for invasive surgical biopsies. Both of these techniques and their clinical application are undergoing intensive study at Charité, the Berlin Institute of Health at Charité (BIH) and the MDC.