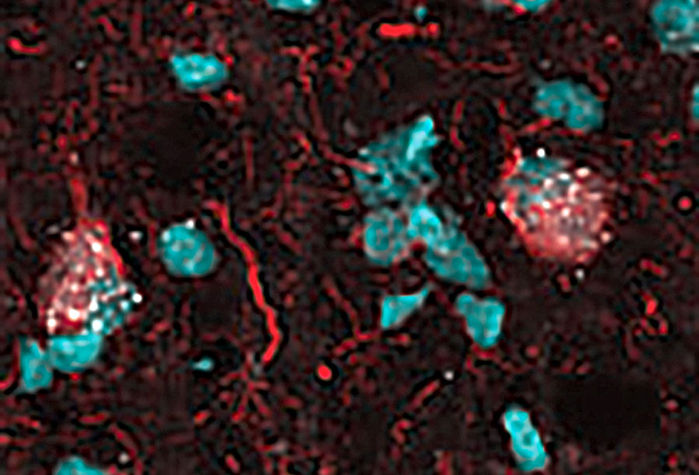 For the first time, scientists have identified a rare population of potentially toxic senescent cells in human brains that can serve as a target for a new Alzheimer’s disease treatment.

The study, published in the Dec.10 edition of the journal Nature Aging, was led by Miranda Orr, Ph.D., assistant professor of gerontology and geriatric medicine, at Wake Forest School of Medicine and research health scientist at the W.G. Hefner VA Medical Center, and Habil Zare, Ph.D., assistant professor of cell systems and anatomy, at University of Texas Health San Antonio. The study was funded by the U.S. Department of Veterans Affairs and National Institute on Aging.

Senescent cells are old, sick cells that cannot properly repair themselves and don’t die off when they should. Instead they function abnormally and release substances that kill surrounding healthy cells and cause inflammation. Over time, they continue to build up in tissues throughout the body contributing to the aging process, neurocognitive decline and cancer.

Research conducted by Orr in 2018 found that senescent cells accumulated in mouse models of Alzheimer’s disease where they contributed to brain cell loss, inflammation and memory impairment. When the researchers used a therapy to clear the senescent cells, they halted disease progression and cell death.

“However, until now, we didn’t know to what extent senescent cells accumulated in the human brain, and what they actually looked like,” Orr said. “It was somewhat like looking for the proverbial needle in a haystack except we weren’t sure what the needle looked like.”

Using sophisticated statistical analyses, the research team was able to evaluate large amounts of data. In total, they profiled tens of thousands of cells from the postmortem brains of people who had died with Alzheimer’s disease. The researchers’ plan was to first determine if senescent cells were there, then how many there were and what types of cells they were. They succeeded.

The team found that approximately 2% of the brain cells were senescent and also identified the type of cell and the characteristic features.

The study findings indicated that the senescent cells were neurons, which are the fundamental units in the brain that process information and are the workhorses of memory. They also are the primary cells that are lost in Alzheimer’s disease.

Next, Orr’s team sought to determine if the senescent neurons had tangles – abnormal accumulations of a protein called tau that can collect inside neurons in Alzheimer’s disease. These tangles closely correlate with disease severity, meaning that the more tangles individuals have in their brains, the worse their memory, Orr said.

The researchers found that the senescent neurons not only had tangles but that they overlapped to the point that it was hard to distinguish between them.

Lastly, the team validated the findings by examining a different cohort of postmortem brain tissue samples from people with Alzheimer’s.

“Now that we have identified these cells in the brain, we have opened the door to many possibilities, including treatment options for people with Alzheimer’s,” Orr said.

Orr is in the process of launching a $3 million, Phase 2 clinical trial funded by the Alzheimer’s Drug Discovery Foundation (ADDF) to test the effects of clearing senescent cells in older adults with mild cognitive impairment or early stage Alzheimer’s. The intervention, which was discovered by Orr’s collaborators at the Mayo Clinic, consists of administering a repurposed U.S. Food and Drug Administration-approved drug designed to clear cancer cells in combination with a flavonoid, a plant-derived antioxidant.

The therapy worked well in Alzheimer’s disease mouse models, and has proven safe in humans with other conditions, as previously reported by a team involving Wake Forest School of Medicine, University of Texas Health in San Antonio and the Mayo Clinic. The three sites will again collaborate on the ADDF-funded clinical trial, Orr said.

“Dr. Orr’s innovative research stands out as an exciting new way to target one of the many underlying factors that contribute to Alzheimer’s disease,” said Howard Fillit, M.D., founding executive director and chief science officer of the Alzheimer’s Drug Discovery Foundation.

“Dr. Orr and her team are paving the way in senolytics research for Alzheimer’s disease, opening up a new target for potential treatments. This is especially exciting for the field as we now know we will need drugs that work against the many underlying biological processes that go wrong as we age – like the buildup of toxic senescent cells – that contribute to Alzheimer’s disease.”