Tube anemone has the largest animal mitochondrial genome ever sequenced 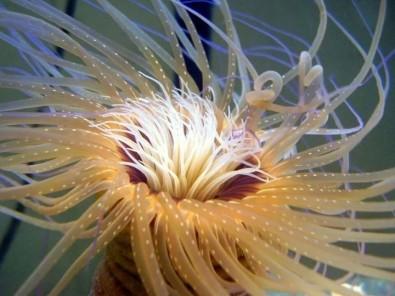 Discovery by Brazilian and US researchers could change the classification of two species, which appear more akin to jellyfish than was thought. Credit: Sérgio Stampar

Tube anemones (Ceriantharia) are the focus of an article recently published in Scientific Reports describing the findings of a study led by Sérgio Nascimento Stampar (https://bv.fapesp.br/en/pesquisador/171695/sergio-nascimento-stampar/), a professor in São Paulo State University's School of Sciences and Letters (FCL-UNESP) at Assis in Brazil.

The study was supported by FAPESP via a regular grant for the project “Evolution and diversity of Ceriantharia (Cnidaria” and via its program São Paulo Researchers in International Collaboration (SPRINT) under a cooperation agreement with the University of North Carolina (UNC) at Charlotte in the US.

The mitogenome is simpler than the nuclear genome, which in the case of I. nocturnus has not yet been sequenced, Stampar explained. The human nuclear genome comprises some 3 billion base pairs, for example.

Another discovery reported in the article is that I. nocturnus and Pachycerianthus magnus (another species studied by Stampar's group, 77,828 base pairs) have linear genomes like those of medusae (Medusozoa), whereas other species in their class (Anthozoa) and indeed most animals have circular genomes.

I. nocturnus is found in the Atlantic from the coast of Patagonia in Argentina as far north as the East Coast of the US. P. magnuslives in the marine environment around the island of Taiwan in Asia. Both inhabit waters at most 15 m deep.

“I. nocturnus's mitogenome is almost five times the size of the human mitogenome,” Stampar said. “We tend to think we're molecularly more complex, but actually our genome has been more 'filtered' during our evolution. Keeping this giant genome is probably more costly in terms of energy expenditure.”

The shape of the mitogenomes in these two species of tube anemone and the gene sequences they contain were more surprising than their size.

Because they are closely related species, their gene sequences should be similar, but I. nocturnus has five chromosomes while P. magnus has eight, and each has a different composition in terms of genes. This kind of variation had previously been found only in medusozoans, sponges, and some crustaceans.

“Humans and bony fish species are more similar than these two tube anemones in terms of the structure of their mitochondrial DNA,” Stampar said.

To arrive at these results, the researchers captured specimens in São Sebastião, which lies on the coast of São Paulo State in Brazil, and off Taiwan in the South China Sea. Small pieces of the animals' tentacles were used to sequence their mitogenomes.

The genomes of the two species hitherto available from databases were incomplete owing to the difficulty of sequencing them. After completing the study, the researchers published the genomes by gifting them to GenBan, a database maintained in the US by the National Center for Biotechnology Information (NCBI) at the National Institutes of Health (NIH).

Another obstacle to sequencing was the difficulty of collecting these animals because of their elusive behavior. In response to any potential threat, a tube anemone hides in the long leathery tube that distinguishes it from true sea anemones, making capture impossible.

“You have to dig a hole around it, sometimes as deep as a meter, and stop up the part of the tube buried in sand. All this must be done under water while carrying diving gear. Otherwise, it hides in the buried part of the tube and you simply can't get hold of it,” Stampar said.

Thanks to the support of FAPESP's SPRINT program, Stampar and Marymegan Daly, a research colleague at Ohio State University in the US, established a partnership with Adam Reitzel and Jason Macrander at UNC Charlotte. Macrander, then a postdoctoral researcher under Reitzel, is a professor at Florida Southern College.

Reitzel and Macrander specialize in the use of bioinformatics to filter genomics data and assemble millions of small pieces of mitochondrial DNA into a single sequence. They used this technique to arrive at complete mitochondrial genomes for both species.

“In this technique, you sequence bits of the genome and link them in a circle. The problem is that this only works with circular genomes. Because we couldn't find a piece to close the circle, we realized the genome had to be linear, as it is for Medusozoa,” Stampar said.

However, more data will be needed before a definitive conclusion can be reached. The necessary data could come from the sequencing of these species' nuclear genomes, which Stampar and his group intend to complete by the end of 2019.