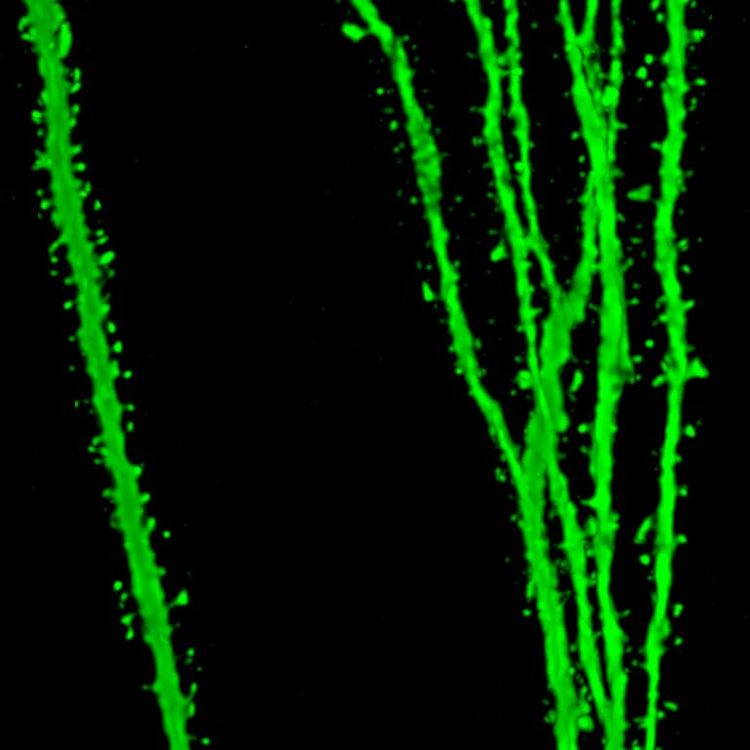 The dendrites of newborn neurons (green) are covered with spines, similar to the thorns on a rose stem Tassilo Jungenitz

Even in adult brains, new neurons are generated throughout a lifetime. In a publication in the scientific journal PNAS, a research group led by Goethe University describes plastic changes of adult-born neurons in the hippocampus, a critical region for learning: frequent nerve signals enlarge the spines on neuronal dendrites, which in turn enables contact with the existing neural network.

Practise makes perfect, and constant repetition promotes the ability to remember. Researchers have been aware for some time that repeated electrical stimulation strengthens neuron connections (synapses) in the brain. It is similar to the way a frequently used trail gradually widens into a path.

Conversely, if rarely used, synapses can also be removed – for example, when the vocabulary of a foreign language is forgotten after leaving school because it is no longer practised. Researchers designate the ability to change interconnections permanently and as needed as the plasticity of the brain.

Plasticity is especially important in the hippocampus, a primary region associated with long-term memory, in which new neurons are formed throughout life. The research groups led by Dr Stephan Schwarzacher (Goethe University), Professor Peter Jedlicka (Goethe University and Justus Liebig University in Gießen) and Dr Hermann Cuntz (FIAS, Frankfurt) therefore studied the long-term plasticity of synapses in new-born hippocampal granule cells. Synaptic interconnections between neurons are predominantly anchored on small thorny protrusions on the dendrites called spines. The dendrites of most neurons are covered with these spines, similar to the thorns on a rose stem.

In their recently published work, the scientists were able to demonstrate for the first time that synaptic plasticity in new-born neurons is connected to long-term structural changes in the dendritic spines: repeated electrical stimulation strengthens the synapses by enlarging their spines.

“This observation was only technically possible because our students Tassilo Jungenitz and Marcel Beining succeeded for the first time in examining plastic changes in stimulated and non-stimulated dendritic spines within individual new-born cells using 2-photon microscopy and viral labelling,” says Stephan Schwarzacher from the Institute for Anatomy at the University Hospital Frankfurt.

Peter Jedlicka adds: “The enlargement of stimulated synapses and the shrinking of non-stimulated synapses was at equilibrium. Our computer models predict that this is important for maintaining neuron activity and ensuring their survival.”

The scientists now want to study the impenetrable, spiny forest of new-born neuron dendrites in detail. They hope to better understand how the equilibrated changes in dendritic spines and their synapses contribute the efficient storing of information and consequently to learning processes in the hippocampus.

Picture material can be downloaded at: www.uni-frankfurt.de/72306770
Caption: The dendrites of newborn neurons (green) are covered with spines, similar to the thorns on a rose stem (Credit: Tassilo Jungenitz).

Current news about science, teaching, and society in GOETHE-UNI online (www.aktuelles.uni-frankfurt.de)
Goethe University is a research-oriented university in the European financial centre Frankfurt The university was founded in 1914 through private funding, primarily from Jewish sponsors, and has since produced pioneering achievements in the areas of social sciences, sociology and economics, medicine, quantum physics, brain research, and labour law. It gained a unique level of autonomy on 1 January 2008 by returning to its historic roots as a “foundation university”. Today, it is among the top ten in external funding and among the top three largest universities in Germany, with three clusters of excellence in medicine, life sciences and the humanities. Together with the Technical University of Darmstadt and the University of Mainz, it acts as a partner of the inter-state strategic Rhine-Main University Alliance.