The evolution of vinegar flies… 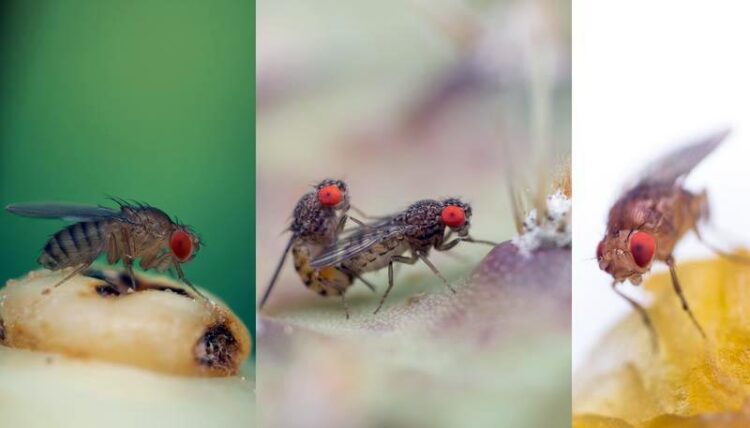 …is based on the variation of male sex pheromones.

Max Planck researchers decipher the chemical language underlying mating in 99 species of the genus Drosophila. By analyzing the genomes of 99 species of vinegar flies and evaluating their chemical odor profiles and sexual behaviors, researchers at the Max Planck Institute for Chemical Ecology show that sex pheromones and the corresponding olfactory channels in the insect brain evolve rapidly and independently.

By analyzing the genomes of 99 species of vinegar flies and evaluating their chemical odor profiles and sexual behaviors, researchers at the Max Planck Institute for Chemical Ecology show that sex pheromones and the corresponding olfactory channels in the insect brain evolve rapidly and independently. Female flies are able to recognize conspecific males through their specific odor profiles. Interestingly, closely related species show distinct differences in odor profiles, which helps to prevent mating between different species. Males, in turn, chemically mark females during mating so that they become less attractive to other males. The results of this study are a valuable basis for understanding how pheromone production, their perception and processing in the brain, and ultimately the resulting behavior drive the evolution of new species (Nature Communications, July 2021, DOI: 10.1038/s41467-021-24395-z).

A large family with extravagant relatives

As in most animals, mate choice in vinegar flies is primarily based on chemical signals. There are several reasons why the genus Drosophila is ideally suited for studying the evolution and diversity of sex pheromones. The more than 1.500 known species of vinegar flies are found all over the world in a wide variety of different habitats: in deserts, rainforests, caves, swamps, or mountains. Often, rotting fruit and the yeasts responsible for fermentation are the primary food source. Some species also feed on fresh fruit, mushrooms, tree bark, flowers, bacterial slime, or frog spawn. In many species, especially in the model organism Drosophila melanogaster, the processing of olfactory information in the brain has already been well described. The receptors for the sex pheromones are precisely tuned to detect the odor of the conspecific mating partner.

In a new study published now in Nature Communications, researchers led by Mohammed Khallaf and Markus Knaden investigated how sex pheromones evolved in 99 different species of the genus Drosophila. “We identified the sex pheromones and the corresponding olfactory channels in the olfactory system of flies to explore the evolution of pheromone signaling with respect to phylogenetic relationships,” said Mohammed Khallaf, first author of the study. 41 of the species under investigation had already been fully sequenced. By sequencing the whole genomes of further 58 species, the scientists presented the most comprehensive phylogenetic analysis of the genus Drosophila to date.

By using the genomic data, it was possible to genetically compare differences in chemical profiles as well as differences in odor detection and processing. The researchers collected the odors of individual flies: Five males, virgin and mated females from each species, resulting in odors of over 1500 flies in total, were analyzed. “While the comparison of male and virgin female flies informed us about sex-specific differences, variations between mated and virgin females informed us about male-specific compounds transferred to females during mating,” Markus Knaden, head of the project group Odor-guided Behavior in the Department of Evolutionary Neuroethology, summarized.

The difference lies in the detail

In all 99 fly species studied, 52 different odor compounds were identified. In 81 species, the scientists found pheromones that are only produced by male flies. Of these species, males produce 58 different odor blends, which can consist of up to seven individual odors. While the males attract attention with a sophisticated chemistry, it is ultimately the females who decide whether mating occurs or not. “Interestingly closely related species often show clear differences in their pheromone profile. At the same time, individual pheromones show up again and again along the phylogenetic tree. For example, males of 34 of the 99 species studied produce cis-vaccenyl-acetate (cVA), a well described Drosophila melanogaster pheromone. Most of the male-derived pheromones fulfill the same functions: Firstly, they attract females and secondly, they are transferred to the females during mating to make them smell less attractive to other males. This ensures the males’ reproductive success,“ said Markus Knaden.

The significant differences in the pheromone profile of males of closely related species suggest that the selection pressure to prevent mating between these species that have evolved from a common ancestor is high. On the other hand, the fact that as many as 34 species produce cis-vaccenyl acetate as a sex pheromone shows that there may only be a limited number of genes responsible for pheromone production. As long as there is no pressure to mark a difference from an evolutionary perspective, different species produce the same pheromone.
A key observation is that it is mostly the male fly in the genus Drosophila that is the transmitter of the chemical signal, while the females, as receivers, recognize and interpret the signal. “The diversity and abundance of male-specific compounds compared to female ones is astonishing: Of the 52 different odor compounds, 43 are produced exclusively by males, while only 9 are produced by females. Moreover, 81 Drosophila species communicate via male pheromones, while only 15 species have specifically female pheromones,” said Mohammed Khallaf.

From odor to behavior

The study is the first comprehensive analysis of the mating behaviors of a large number of Drosophila species. “While we were performing mating experiments we could already observe that some of the species showed very specific behaviors. Some of them were driven by olfaction and only started their mating dance when the partner had the right smell. Sometimes, however, the right wing pattern or the male’s song also triggered the female’s mating behavior,” Bill Hansson, who heads the Department of Evolutionary Neuroethology where the study was performed, described the observations in the mating arena. Presumably, sex pheromones play a crucial role as the first cue to identify the right partner before mating. Once a female has been attracted and is ready to mate, other mating rituals may also be initiated, including dance, nuptial gift or song. The researchers will further evaluate the recorded mating experiments for future studies and hope that these materials motivate other research groups to take a closer look at the mating strategies of different drosophilids as well.

250GB of raw data, including genome sequences (66 species), mating movies (1467 recordings), chemical profiles of virgin males, and virgin and mated females (over 1500 replicates; five replicates or more of each sex in all 99 species), and other supplementary data are available here: https://dx.doi.org/10.17617/3.5w