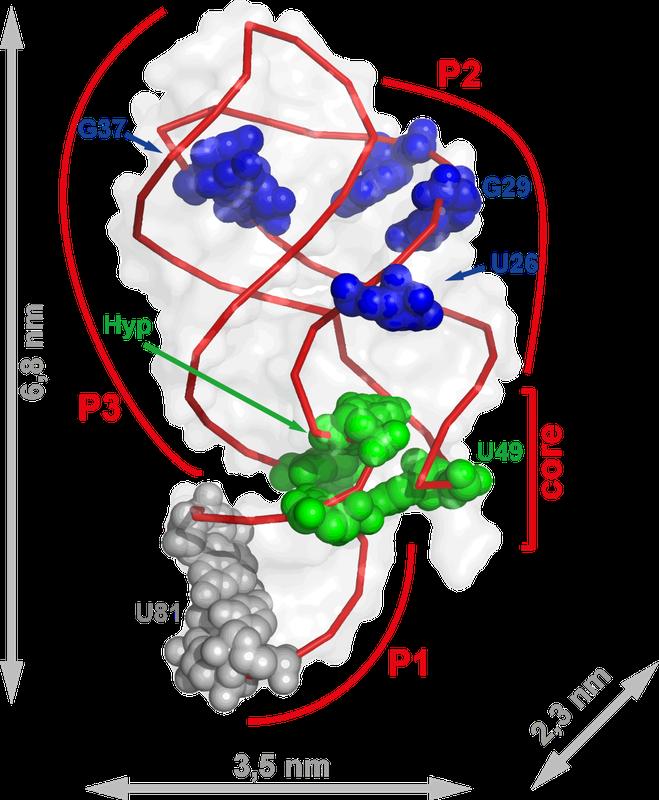 Frankfurt researchers followed the movements of this tiny molecule – just two-thousandths of the thickness of a piece of paper. The RNA aptamer changes its structure when it binds hypoxanthine. The green nucleobases change shape particularly quickly, the ones coloured blue more slowly. The grey regions do not change. Goethe University

Even more detailed insights into the cell will be possible in future with the help of a new development in which Goethe University was involved: Together with scientists from Israel, the research group led by Professor Harald Schwalbe has succeeded in accelerating a hundred thousand-fold the nuclear magnetic resonance (NMR) method for investigating RNA.

In the same way that a single piece of a puzzle fits into the whole, the molecule hypoxanthine binds to a ribonucleic acid (RNA) chain, which then changes its three-dimensional shape within a second and in so doing triggers new processes in the cell.

Thanks to an improved method, researchers are now able to follow almost inconceivably tiny structural changes in cells as they progress – both in terms of time as well as space. The research group led by Professor Harald Schwalbe from the Center for Biomolecular Magnetic Resonance (BMRZ) at Goethe University has succeeded, together with researchers from Israel, in accelerating a hundred thousand-fold the nuclear magnetic resonance (NMR) method for investigating RNA.

“This allows us for the first time to follow the dynamics of structural changes in RNA at the same speed as they occur in the cell,” says Schwalbe, describing this scientific breakthrough, and stresses: “The team headed by Lucio Frydman from the Weizmann Institute in Israel made an important contribution here.”

The new types of NMR experiments use water molecules whose atoms can be followed in a magnetic field. Schwalbe and his team produce hyperpolarized water. To do so, they add a compound to the water which has permanently unpaired electron radicals. The electrons can be aligned in the magnetic field through excitation with a microwave at -271°C.

This unnatural alignment produces a polarization which is transferred at +36°C to the polarization of the hydrogen atoms used in the NMR. Water molecules polarized in this way are heated in a few milliseconds and transfered, together with hypoxanthine, to the RNA chain. The new approach can in general be applied to observe fast chemical reactions and refolding changes in biomolecules at atomic level.

In particular the imino groups in RNA can be closely analyzed using this method. In this way, the researchers were able to measure structural changes in RNA very accurately. They followed a small piece of RNA from Bacillus subtilis, which changes its structure during hypoxanthine binding.

This structural change is part of the regulation of the transcription process, in which RNA is being made from DNA. Such small changes at molecular level steer a large number of processes not only in bacteria but also in multicellular organisms and even humans.

This improved method will in future make it possible to follow RNA refolding in real time – even if it needs less than a second. This is possible under physiological conditions, that is, in a liquid environment and with a natural molecule concentration at temperatures around 36 °C.

“The next step will now be not only to study single RNAs but hundreds of them, in order to identify the biologically important differences in their refolding rates,” says Boris Fürtig from Schwalbe’s research group.

Caption: Frankfurt researchers followed the movements of this tiny molecule – just two-thousandths of the thickness of a piece of paper. The RNA aptamer changes its structure when it binds hypoxanthine. The green nucleobases change shape particularly quickly, the ones coloured blue more slowly. The grey regions do not change.

Current news about science, teaching, and society can be found on GOETHE-UNI online (www.aktuelles.uni-frankfurt.de)

Goethe University is a research-oriented university in the European financial centre Frankfurt am Main. The university was founded in 1914 through private funding, primarily from Jewish sponsors, and has since produced pioneering achievements in the areas of social sciences, sociology and economics, medicine, quantum physics, brain research, and labour law. It gained a unique level of autonomy on 1 January 2008 by returning to its historic roots as a “foundation university”. Today, it is one of the three largest universities in Germany. Together with the Technical University of Darmstadt and the University of Mainz, it is a partner in the inter-state strategic Rhine-Main University Alliance.