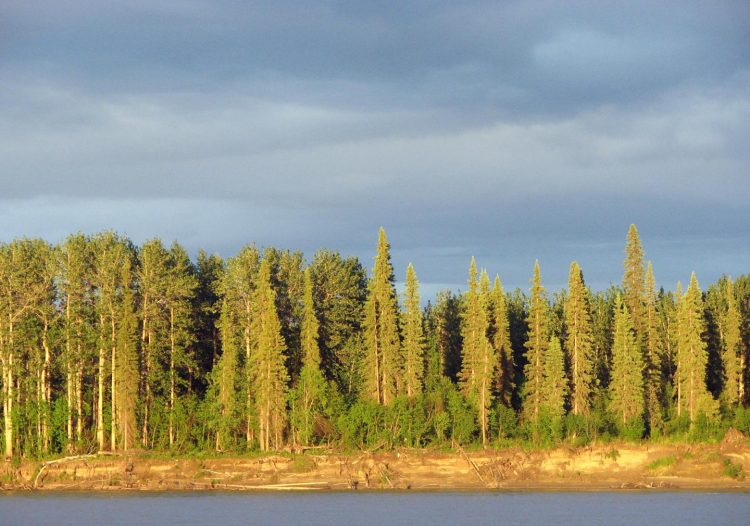 Floodplain white spruce stand along lower Yukon River, late at night near the summer solstice in 2007. Courtesy of Photo by Claire Alix

The findings are the result of a study led by University of Alaska Fairbanks School of Natural Resources and Extension researcher Glenn Juday, Claire Alix of the University of Paris 1 Pantheon-Sorbonne, and Tom Grant, formerly an adjunct faculty member at UAF. Their findings were recently published online by the journal Forest Ecology and Management.

'For the first time across a major forest region, we have real data showing that biome shift has started,' Juday said. 'This is not a scenario model, or a might, or a maybe. The boreal forest in Interior Alaska is very near dying from unsuitably warm temperatures. The area in Western Alaska where the forest transitions to tundra is now the productive heart of the boreal forest.'

The paper is the result of 10 years of research. Juday and Alix gathered white spruce tree cores and disks from 540 trees in 36 stands along the Yukon, Tanana and Kuskokwim rivers. They started in easternmost Alaska and sampled downriver to the western edge of the boreal forest near the Bering Sea. The research required the team to travel hundreds of miles down some of the most pristine large rivers left on Earth. Sam Demientieff, a longtime Interior river traveler and Alaska Native leader, provided much of the river transportation and expertise required to navigate the silt-filled water and constantly shifting channels.

The researchers took two measurements from each annual growth ring of the 100 to 250-year-old trees, then analyzed the nearly quarter-million measurements to determine how much the trees grew each year. They then compared that growth to temperature data from eastern, Interior and Western Alaska historical records and weather stations. In addition, they drew on previous scientists' work chronicling tree growth and temperature back more than two centuries.

They found that in Interior Alaska, as summer temperatures rose, the growth of the trees slowed. Meanwhile, in Western Alaska, which is also warming, the trees are growing more rapidly.

'One aspect of the study that makes the results especially clear is that the trees were all growing in the same environment along the big rivers,' Juday said. 'In many transect studies, lots of variables change across the area studied. In ours, the main thing that changed was the climate, from the hot, dry summers of the Interior, to the cooler, wetter climate near the coast.'

Juday notes that their findings don't mean the boreal forest is going away. It's simply shifting away from lowlands in Interior Alaska to higher elevations and the western part of the state, he said. 'The movement of an entire biome is often hypothesized in models of probable future climate, but the Alaska boreal forest is actually shifting today, and the process is well underway.'

Note to editors: downloadable photos are available online at http://news.uaf.edu/borealforest2015.