Striking differences in brain morphology between wild and domestic rabbits 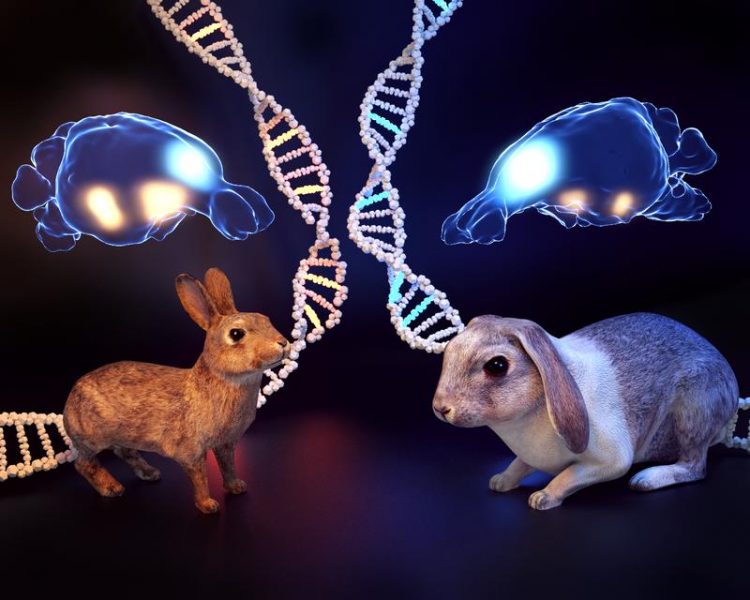 In contrast to domestic rabbits, wild rabbits have a very strong flight response because they are hunted by eagles, hawks, foxes and humans, and therefore must be very alert and reactive to survive in the wild. In fact, Charles Darwin wrote in On the Origin of Species that “…no animal is more difficult to tame than the young of the wild rabbit; scarcely any animal is tamer than the young of the tame rabbit”. There is no doubt that this type of differences in behaviour between wild and domestic animals to a large extent are genetically determined.

‘In a previous study we reported that genetic differences between wild and domestic rabbits are particularly common in the vicinity of genes expressed during brain development,’ explains Miguel Carneiro, from CIBIO-InBIO, University of Porto, one of the leading authors on the paper. ‘In the present study we decided to use high-resolution MRI to explore if these genetic changes are associated with changes in brain morphology,’ says Miguel Carneiro.

The scientists raised eight domestic and eight wild rabbits under very similar conditions to minimize changes due to environmental effects. Furthermore, the brain MRI data were interpreted with sophisticated image analysis in which the scientist carrying out the analysis was unaware of the status animals (wild or domestic).

‘These differences in brain morphology make perfect sense in relation to the fact that domestic rabbits are less fearful and have an attenuated flight response compared with wild rabbits,’ explains Mats Fredrikson, Professor at Uppsala University and Karolinska Institutet, one of the senior authors on the paper.

Our results show that an area involved in sensing fear (the amygdala) is smaller in size while an area controlling the response to fear (the medial prefrontal cortex) is larger in domestic rabbits. The reduced amount of white matter suggests that domestic rabbits have a compromised information processing possibly explaining why they are more slow reacting and phlegmatic than their wild counterparts.’

‘No previous study on animal domestication has explored changes in brain morphology between wild and domestic animals in such depth as we have done in this study,’ says Leif Andersson, Uppsala University, Swedish University of Agricultural Sciences and Texas A&M University. ‘When we initiated the study the concern was that any changes may be too subtle to be noticeable with MRI but that was clearly not the case as we noticed distinct changes.’

‘This study is not only important for our understanding of animal domestication but also for the basic understanding how variation in brain morphology can impact a complex behaviour like fear response,’ ends Leif Andersson.