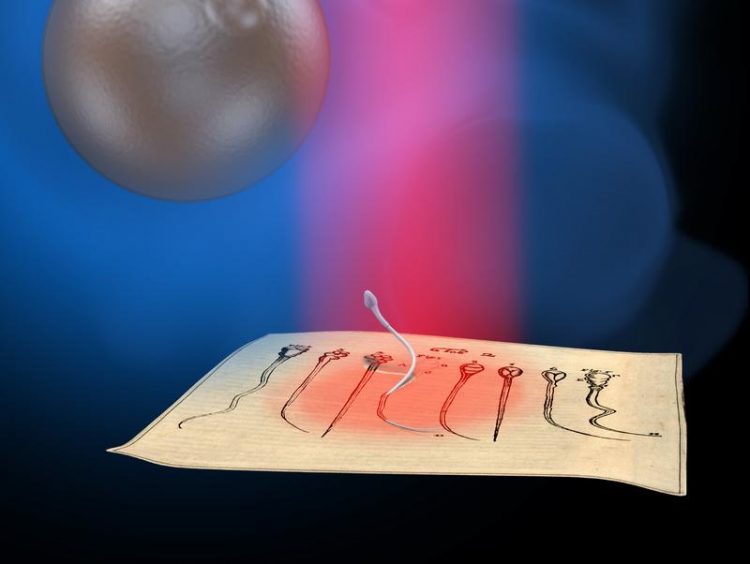 On the way to the egg - from the 2D perspective of sperm navigation (illustration from Antoine van Leeuwenhoek, 1678) to a 3D view in sperm chemotaxis (Jan Jikeli et al., 2015) Research Center caesar

For reproduction, sea urchins release their eggs and sperm into the vast ocean. There, sperm are facing the difficult task to find an egg, which is only a tenth of a millimeter in size. Without seeing, hearing, or touching the egg, this seems to be an insurmountable challenge.

Thus, how do sperm accomplish this task? Sea urchin sperm deploy exquisitely reliable signaling and navigation strategies to seek and find the egg; after all, these species live on our planet since about 400 million years. The mechanism has intrigued scientists for a century. The sperm tail serves as antenna that probes the environment and as motor or rudder that propels the cell and controls the swimming direction.

Although the chemical attractants that guide sperm to the egg have been identified, the “search strategy” or navigation in a chemical gradient remained unknown. In a recent study published in Nature Communications, scientists from the Research Center caesar in Bonn, solved this puzzle in collaboration with their colleagues from Harvard in Boston, the University of York in UK, and from the Max Planck Institute for the Physics of Complex Systems in Dresden.

They recorded the movement of sperm in three dimensions (3D) as they navigate in a gradient of the attractant. Using a combination of techniques such as holographic microscopy and light-activated attractants, the scientists tested theoretical models of sperm navigation.

“Our knowledge about 3D navigation has been rudimentary, because it’s technically challenging to follow freely swimming sperm. It is much easier to follow rapidly moving microswimmers like sperm in shallow chambers, where they swim in 2D. Using holography, we now recorded sperm movements in 3D. We created chemical “landscapes” of the chemoattractant by photonic techniques that produce the attractant with light. Thereby, we were able to mimic the egg”, commented Prof. U. B. Kaupp, scientific director of caesar.

The study reveals sophisticated computations during navigation. In contrast to bacteria navigating to food sources, sperm follow a deterministic strategy, whereas bacteria choose a new direction at random to hope for the best. Sperm execute different steering maneuvers when sensing either more or less of the attractant. Thus, sperm register when they follow the right or a wrong track.

When leading to the egg, the correcting movements of their swimming helix are smooth and subtle. When they lose the “scent” of the attractant, however, they steer rigorously. The scientists revealed the cellular signaling events underlying steering. In general, the study illustrates the complexity, by which sperm explore or “sense” a chemical landscape and use this information to control the beating of their tail.

“Not only through senses such as vision is it possible to gain precise information about the 3D space that surrounds an organism. Sperm offer a popular model to study how a single cell explores its 3D environment, an essential requisite for survival”, concludes Luis Alvarez, a group leader of the project.

Video: 3D reconstruction of the swimming path of a sperm cell. The vertical grey line coincides with the center of the attractant cloud.