Sea cucumbers: the vacuum cleaners of the oceans 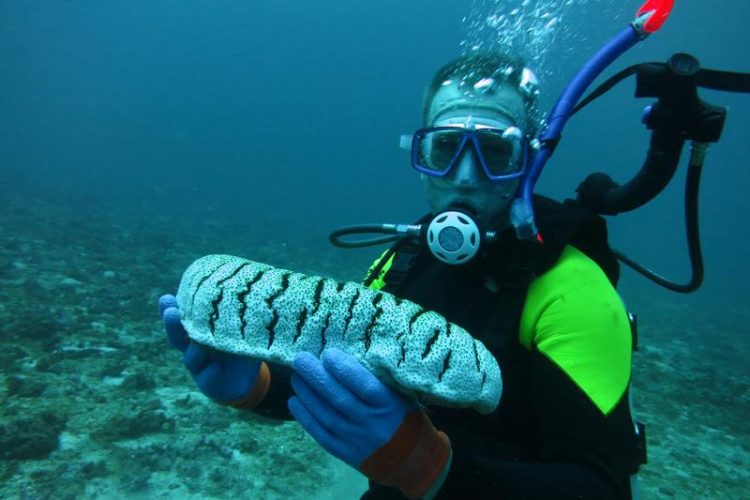 Like starfish and sea urchins, sea cucumbers are echinoderms, with about 14,000 species currently known. They live in all marine environments from the Arctic to the tropics. They range in size from only a few millimetres long to more than two meters.

Some are as thin as a rope, while others are muscular and cylindrical. They are adapted to life on the seabed and can be found mainly in shallow coastal waters. Many plough through sandy sediments looking for food such as detritus or microalgae. Devouring the sediment, they digest the organic components and then excrete the sand again.

This vigorous burrowing activity has been the subject of investigations carried out by researchers from ZMT off the island of Vanua Levu in Fiji. In the shallow waters in the back of a coral reef the scientists placed 16 bottomless cages, which were filled with sea cucumbers of the species Holothuria scabra, commonly known as sandfish. For half a year the research team regularly took sediment samples from the confined areas and measured the oxygen content as an indicator of the amount of organic matter in the sediment.

In contrast to the empty enclosures, the researchers found a much smaller oxygen consumption in the sediment of cages with a high density of sea cucumbers, similar to that expected in untouched coastal areas. This shows that organic material accumulated when sea cucumbers were reduced.

“Our figures show that in one year sandfish will work through about 10,600 kilos of sediment on an area of 1,000 square metres,” explains Dr. Sebastian Ferse, reef ecologist at the ZMT. “These are astonishingly large quantities. Like the lugworms of the North Sea, sea cucumbers are highly efficient biofilters.”

Dubbed “vacuum cleaners of the seas”, sea cucumbers are invaluable for marine ecosystems. As more waste water from cities, hotels, agriculture and aquaculture plants is being discharged into the sea, the waters along the coasts become over-fertilized.

Sea cucumbers prevent the accumulation of high levels of organic matter in the sediments, which in turn is a breeding ground for pathogenic bacteria and contributes to the growth of algae. If algae take over, they can overgrow precious habitats such as seagrass meadows or coral reefs.

More than 30,000 tons of sea cucumbers are caught every year, mainly for the Asian market. In Southeast Asia, many coastal regions have already been fished empty. These echinoderms are also becoming increasingly rare in the Caribbean and the Red Sea.

Sea cucumbers are considered a superfood, especially in China: rich in proteins and trace elements, they are said to be a cure for high blood pressure, are thought to suppress cancer and to have an aphrodisiac effect. They are easy to collect and can yield several hundred dollars per animal, which contributes to their enormous overfishing. “Boiled and then dried, they are added for example to soups. Their meat, though, is rather tasteless and gelatinous,” reports Sebastian Ferse.

„Our results shed a light on the ecological effects of sea cumber overfishing, which until now had been largely unknown” says Ferse. The results have now been passed on to the Fisheries Ministry in Fiji, where they provide important information for the formulation of a fisheries management plan. ZMT is also investigating how sea cucumbers can be kept in an integrated aquaculture system that combines different organisms and thus improves the ecological balance of the system.