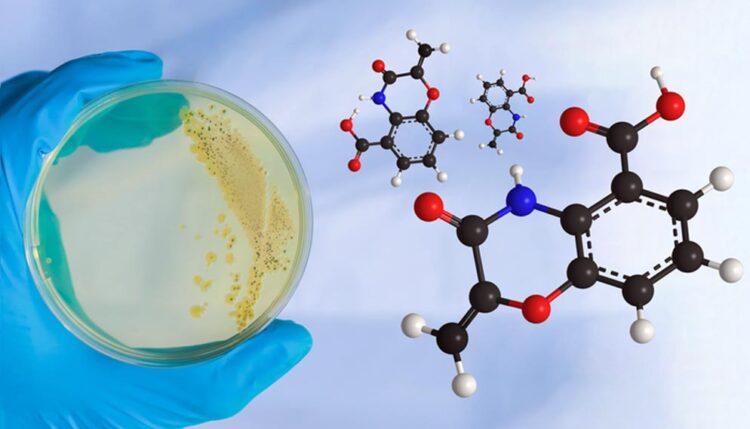 Natural products containing benzoxazolinate, a structure with two rings, are excellent candidates for pharmaceutically valuable substances, such as antibiotics, anticancer drugs or immunosuppressants. But how can their producers be identified?
Credit: Max Planck Institute for Terrestrial Microbiology/Crames

Genome mining uncovers a widespread class of natural products that could be excellent candidates for future drugs.

Benzobactins are bacterial natural products that have special biological activity due to a compound consisting of two ring structures. The bacterial genes responsible for the formation of the compound were previously unclear. Now, scientists at the Max Planck Institute for Terrestrial Microbiology have been able to decipher its biosynthesis through extensive genomic research. Their research facilitates the discovery of numerous previously unknown natural compounds for medical drug therapy.

In their natural habitat, microorganisms are often exposed to changing environmental conditions that require numerous survival responses. The most efficient one is their capability to produce a wide array of natural products with diverse chemical structures and functions.

Benzoxazolinate is a rare natural compound that confers extraordinary bioactivities on natural products. It is, for example, the essential part of lidamycin, an antitumor antibiotic that is one of the most cytotoxic compounds so far. The reason for this capacity is the fact that benzoxazolinate consists of two rings, a structure that allows it to interact with protein as well as with DNA. However, tracking down the producers of this rare substance in nature resembles the proverbial search for a needle in a haystack.

In order to exploit new pharmaceutically valuable natural compounds, like antibiotics, tumor suppressants or immunosuppressants, it is necessary to know the responsible genes, or more precisely, their biosynthetic gene clusters (BGCs). BGCs are locally clustered groups of two or more genes that together encode the production of a certain set of enzymes – and thus the corresponding natural products produced by these enzymes.

Using an enzyme as a probe for natural substances

PhD student Jan Crames, co-first author of the study that was also funded by the LOEWE Centre for Translational Biodiversity Genomics (LOEWE TBG) and the European Research Council, explains: “Knowing the enzyme`s identity, we used it as a probe. With genome-mining we were able to detect many closely related biosynthetic pathways for benzoxazolinate-containing natural products, so-called benzobactins.” According to the scientists, the most striking aspect was the wide distribution of these genes in other bacteria. “These pathways were found in taxonomically and ecologically remarkably diverse bacteria ranging from land to ocean, as well as plant pathogens and biocontrol microbes. Their wide distribution indicates that these molecules have a significant ecological function on the producers,” as Yi-Ming Shi, first author of the study indicates.

Prof. Helge Bode, leader of the department “Natural Products in Organismic Interactions“ at the Max-Planck Institute for Terrestrial Microbiology in Marburg, adds: “Our findings reveal the immense biosynthetic potential of a widespread biosynthetic gene cluster for benzobactin. Now, we have to find out their ecological function and if we can apply them as antibiotics or other drugs.”

Crystallization and structural analysis of a key enzyme was performed in cooperation with Dr. Laura Czech and Prof. Gert Bange from SYNMIKRO, Philipps-University Marburg. Enzyme kinetics was analyzed by Nicole Paczia and the team from our Core Facility for Metabolomics and Small Molecule Mass Spectrometry. Genome sequencing was carried out by Prof. Jörn Kalinowski and the team from Bielefeld University.