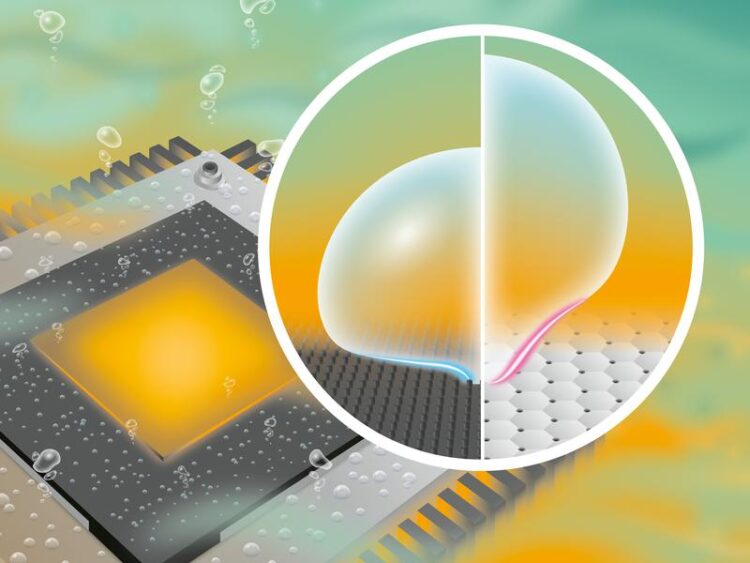 A very thin film of liquid forms under a steam bubble during boiling. It determines how precisely the bubbles grow and detach from different surfaces.
Credit: HZDR/Blaurock

A new model now describes the boiling process with much greater precision.

When a liquid boils in a vessel, tiny vapor bubbles form at the bottom and rise, transferring heat in the process. How these small bubbles grow and eventually detach was previously not known in any great detail. A German-Chinese research team under the leadership of the Helmholtz-Zentrum Dresden Rossendorf (HZDR) has now managed to fundamentally expand this understanding. The findings could be applied to future cooling systems for microprocessors, or to the production of carbon-neutral hydrogen, known as green hydrogen, as the team reported in the Journal of Colloid and Interface Science (DOI: 10.1016/j.jcis.2022.10.062).

How droplets or vapor bubbles wet a surface depends on the type and nature of the surface material. For example, spherical drops form on hydrophobic materials, with minimum contact area to the base. With hydrophilic materials, however, the liquid tends to create flat deposits – the solid-liquid interface is then much larger. Such processes can be described theoretically by the Young–Laplace equation. This equation yields a contact angle that characterizes droplet behavior on the surface: large angles indicate poor wetting, whereas small angles indicate good wetting. When a vapor bubble forms on a wall in a boiling liquid, a very thin film of liquid – invisible to the eye – remains beneath it. This film determines how the bubble grows and how it detaches from the wall. The contact angle also plays a key role in this respect.

The underlying theory is based on a relatively simple approach. “It takes into account both the pressure exerted externally by the liquid and the vapor pressure inside the bubble,” explained Professor Uwe Hampel, Head of Experimental Thermal Fluid Dynamics at the HZDR. “Then there is capillary pressure, which is created by the curvature of the bubble surface.” Recently, however, a range of experiments using laser measurement have demonstrated that this established theory fails for very small droplets and bubbles: on the nanoscale, the measured contact angles deviated significantly in some cases from the theoretical predictions.

A complex interaction of molecules

To solve this problem, the German-Chinese research team set about revising the theory. To do this, they took a closer look at the processes that occur when a liquid boils. “We considered in detail the interfacial behavior of molecules,” explained HZDR researcher Dr. Wei Ding. “Then we used a computer to simulate the interaction between these molecules.” In doing so, the research group discovered a significant difference from previous approaches: the forces acting between the molecules do not simply add up linearly. Instead, the interaction is much more complex, resulting in distinct nonlinear effects. These are precisely the effects that the experts consider in their new, expanded theory. “Our hypothesis provides a good explanation for the results obtained in recent experiments,” stated Ding with delight. “We now have a far more precise understanding of the behavior of tiny droplets and vapor bubbles.”

Besides completing our understanding of the theoretical basis, the findings also hold the promise of progress in several areas of technology, such as microelectronics. In this area, processors are now so powerful that they give off increasing amounts of heat, which must then be dissipated by cooling systems. “There are ideas to remove this heat by boiling a liquid,” remarked Uwe Hampel. “With our new theory, we should be able to determine the conditions under which rising vapor bubbles can dissipate heat energy most efficiently.” The equations could also help to cool fuel elements in a nuclear reactor more effectively than in the past.

The electrolysis of water to produce carbon-neutral hydrogen, referred to as green hydrogen, is another potential application. Countless gas bubbles form on the membrane surfaces of an electrolyzer during water splitting. With this new theory, it seems conceivable that these bubbles can be influenced more specifically than before, enabling more efficient electrolysis in the future. The key to all these potential applications lies in the selection and structuring of appropriate materials. “Adding nanogrooves to a surface, for example, can significantly accelerate the detachment of gas bubbles during boiling,” explained Wei Ding. “With our new theory, such structuring can now be more finely tailored – a project on which we are already working.”