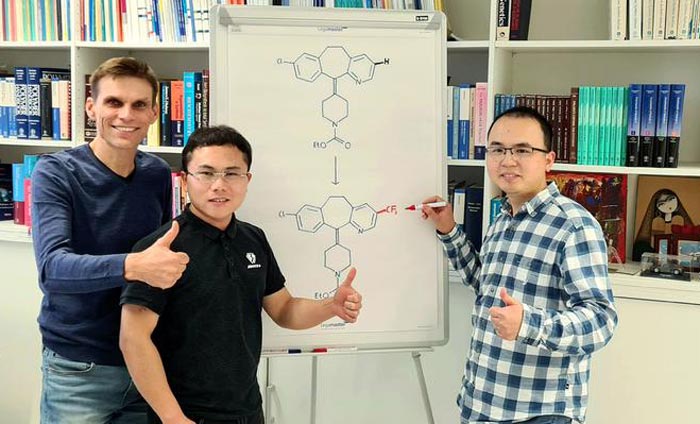 Scientists led by Prof. Armido Studer from the Organic Chemistry Institute of the University of Münster have achieved a breakthrough in the “meta-C-H functionalisation” of pyridines and developed a strategy that could give a boost to the development of pyridine-containing drugs and organic functional materials.

In chemicals used in agriculture, as well as in pharmaceuticals and a variety of materials, pyridines are often found as so-called functional units which decisively determine the chemical properties of substances. Pyridines belong to the group of ring-shaped carbon-hydrogen (C-H) compounds (“heterocycles”), and they contain a nitrogen atom (N). For chemists, the direct functionalization of the carbon-hydrogen bonds (C-H bonds) of pyridines is a straightforward approach to designing and modifying complex molecules, including in the final stage of the synthesis sequence.

This latter means that active ingredients can be chemically modified without having to build them up anew. The functionalization of the pyridine in a certain position in relation to the nitrogen atom – in the difficult-to-access “meta-position” – is extremely challenging and rare.

A team of researchers headed by Prof. Armido Studer at the Institute of Organic Chemistry at the University of Münster has developed a new strategy for getting various functional groups into the meta-position of pyridines. Their study has now been published in the “Science” journal.

The chemists use a temporary de-aromatization of the pyridine: its electronic properties are reversed, producing a stable intermediary product – a dienamine. By means of radical and polar chemistry, the researchers are able, with a high degree of selectivity, to get a large number of fluorinated alkanes, as well as a series of “electron-poor substituents” (electrophiles), into the meta-position. These transformations also include medically and agrochemically relevant functionalities such as trifluoromethyl and halogen groups.

“The important thing,” says Dr. Hui Cao, a postdoc in the Studer working group, “is that the functionalized dienamine intermediary products are easily re-aromatized to meta-functionalized pyridines under acidic conditions.”

His colleague Dr. Qiang Cheng adds, “The high degree of efficiency, the broad range of applications and the meta-selectivity of our approach enables twelve different types of drugs to be functionalized.” In addition, the team developed processes in which drugs can be transformed directly into trifluoromethyl and chlorine-substituted derivatives – in so-called one-pot reactions, which involve little effort and take place in one single reaction vessel. For this purpose, the chemists use inexpensive, commercially available reagents.

“Our study supplies an answer to the unsolved problem of functionalizing pyridine in the meta-position,” says Armido Studer. “We believe that this publication will give a significant boost to the development of medicines containing pyridines and of organic functional materials.”