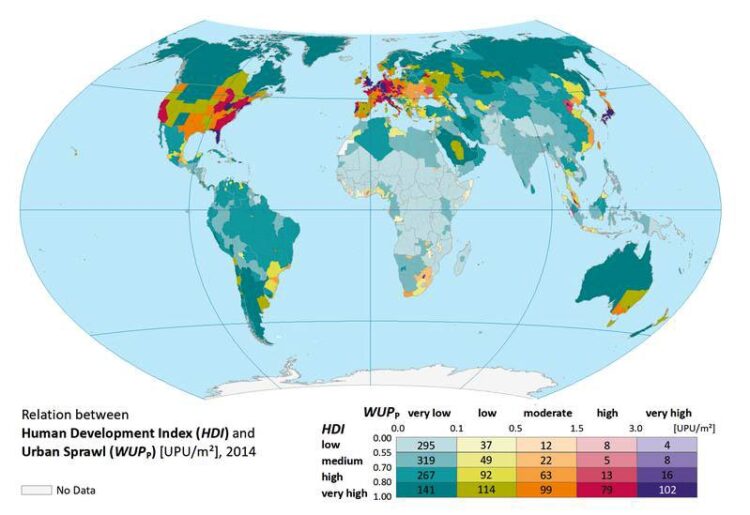 The relationship between classes of human development (HDI) and classes of urban sprawl (WUPp) at the level of subnational units.
[M. Behnisch et al.], PLOS Sustainability and Transformation, 2022, CC-BY 4.0 (https://creativecommons.org/licenses/by/4.0/)

Strongest increase since 1990 in Europe.

Despite many efforts to curb urban sprawl, it continues to progress dramatically. From 1990 to 2014, urban sprawl increased by 95 percent worldwide. During this period, the built-up area grew by an average of around 1.2 square kilometres (more than 160 football fields) every hour. This is the result of a joint study by scientists from the Leibniz Institute of Ecological Urban and Regional Development (IOER) in Dresden (Germany) and Concordia University in Montréal (Canada). They have published their findings in the journal “PLOS Sustainability and Transformation”.

The German-Canadian research team was particularly surprised by the results for Europe. Not only was the continent the most sprawled in 2014. In a comparison of the continents between 1990 and 2014, urban sprawl also increased the most in Europe. “In view of the strong urbanisation in countries such as China and India, we had assumed that urban sprawl in Europe would be much lower than in the East Asian regions, for example, and also less than in North America. However, our results did not confirm this hypothesis,” explains the study’s first author, Martin Behnisch from the IOER. Against the backdrop of the current UN Climate Change Conference (COP27) in Egypt, the current research results convey little optimism, because global urban sprawl is also accompanied by many negative consequences for the environment and the climate (see below “Background urban sprawl”).

For the first time, the extent and development of urban sprawl was studied worldwide in a comprehensive and comparative manner. This was made possible by new global satellite-based settlement datasets that provide information on built-up areas. “For our study, we were able to draw on a dataset that depicts data on built-up areas and population distribution worldwide since 1975. Only by updating the data retrospectively is it possible to analyse changes in urban sprawl over time on the entire planet,” explains co-author Tobias Krüger from the IOER.

The research team pursued the following questions: What is the extent of urban sprawl worldwide? How strongly has urban sprawl changed between 1990 and 2014? What hotspots and trends can be identified? The scientists calculated urban sprawl for five levels of spatial units, namely continents, regions according to the UN Geoscheme, countries, subnational regions such as provinces or states, and a regular grid with cell size of 50 x 50 km2. This allowed them to compare patterns of urban sprawl from coarse to increasingly finer scales, in contrast to previous studies.

How to measure urban sprawl?

The measure of urban sprawl applied in the analyses includes three components: the proportion of built-up areas in an area of investigation, the dispersion of built-up areas, and the settlement density. They indicate to what degree the landscape is permeated by the expansion of human settlement areas. The study also included a measure that determines how much, on average, each individual contributes to urban sprawl by taking up land (urban sprawl per capita).

“Overall, our findings are worrying, because the trend of ever-increasing urban sprawl and unsustainable development continues worldwide,” says co-author Jochen Jaeger from Concordia University in Montréal. The results revealed for many parts of the world that urban sprawl continues to increase, especially in conurbations, for example through the increase in dispersed, low-density development in the outskirts of large cities. The trend of urban sprawl is also visible in many coastal regions that are attractive for tourists, such as along the French Riviera. In terms of per-capita values of urban sprawl, North America, Australia and again Europe show by far the highest values. “Only in a few regions of the world can a decline in urban sprawl be observed. It is by no means possible to speak of a trend reversal toward using land more sparingly,” write the authors. For example, per-capita urban sprawl in Oceania (including Australia) has declined slightly since 1990, but it is still at a very high level there.

What also worries the scientists are their findings about the relationship between the level of human development and the extent of urban sprawl. To find out if the two are interdependent, the team used the United Nations Human Development Index (HDI) in their research. The HDI measures the degree of development of a country on the basis of, among other things, life expectancy and schooling of its population as well as gross national income per capita. As the scientists had suspected, there is a clear correlation: Urban sprawl is highest in those countries that were the most developed. For example, the results show that 30 per cent of OECD (Organisation for Economic Co-operation and Development) countries have high levels of urban sprawl and almost 90 per cent have high levels of per-capita urban sprawl. “If one considers that in world regions such as Africa and Asia, development such as that already experienced by highly industrialised countries is still pending, it becomes clear what an enormous challenge we are facing with regard to limiting land consumption,” Martin Behnisch explains.

What to do about urban sprawl?

“For a more sustainable future, it will be important to find a better balance between a high quality of life and an economical use of land,” say the authors. Planning systems, regulations and measures that have existed in industrialised countries for a long time have not been able to stop urban sprawl so far. According to the scientists, there is an urgent need for further comparative studies on effective instruments to moderate development, for which the presented global results could be a suitable starting point. As a remarkable irony in human development of recent decades, the researchers point to the fact that the more knowledge and planning capacities societies have at their disposal, the more common has been the emergence of high urban sprawl. Sustainability in settlement development requires a fundamental transformation of existing planning practices.

Experts speak of urban sprawl when settlements expand in a scattered arrangement into neighbouring areas and thus often into agricultural or natural areas. Sprawled areas are usually characterised by a low building density. This means that comparatively few buildings take up a disproportionately large area. Due to the need to connect and supply these areas with infrastructure, urban sprawl is accompanied by many negative consequences for the environment and the climate. These effects include the sealing of valuable soils by buildings, roads, and utility infrastructure. Urban sprawl leads to increased fragmentation of wildlife habitats, threatening the biodiversity and resilience of ecosystems and the provisioning of ecosystem services. It causes excessive consumption of natural resources (building materials), increases air pollution through increased traffic, as well as energy consumption and greenhouse gas emissions.

In political objectives related to sustainable development at global, European, and national levels, the sustainable use of land and thus the reduction of urban sprawl is mentioned as an important point, for example, in the United Nations’ Agenda 2030 for Sustainable Development in Sustainability Goal No. 11 “Sustainable Cities and Communities”, in Europe’s Leipzig Charter, and in the German Sustainability Strategy. The current study shows that clearly stronger and novel efforts are needed to achieve these goals.