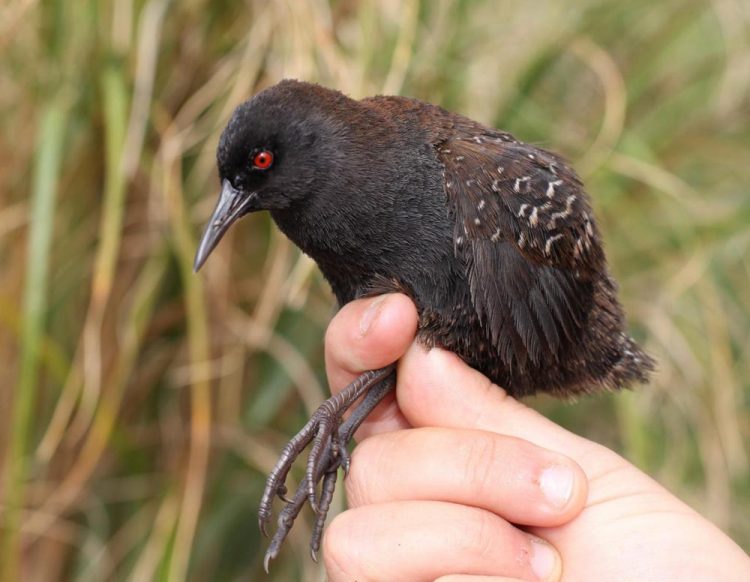 The Inaccessible Island Rail, known now as Atlantisia rogersi, needs a name change after researchers linked the tiny bird to a species in South America. The researchers believe the bird made its journey to the South Atlantic island, the only place in the world where this species of rail lives, in a single migration 1.5 million years ago. Photo by Peter G. Ryan

By wings or maybe riding on debris, that's how a now-flightless and rare species of tiny birds likely got to Inaccessible Island, an aptly named small island of volcanic origin in the middle of the South Atlantic.

And it turns out that the bird, a rail, listed scientifically as Atlantisia rogersi, needs a name change, says Martin Stervander, a postdoctoral researcher in the Institute of Ecology and Evolution at the University of Oregon. His four-member team has found genetic evidence that ties the bird to a South American species.

Inaccessible Island, the westernmost of three islands in the Tristan Archipelago, is the only place in the world where this species of rail lives. The island, formed by a now-extinct volcano 3 to 6 million years ago, is located roughly 3,600 kilometers (2,250 miles) east of Porto Alegre, Brazil, and about 2,800 kilometers (1,750 miles) west of Cape Town, South Africa.

The birds were first described in 1923 by British surgeon Percy Lowe, a bird-lover who then headed the ornithology collections at the British Museum. He placed the birds in the genus Atlantisia, a reference to mythical Atlantis, and named the species rogersi after the Rev. H.M.C. Rogers, a chaplain on nearby island Tristan da Cunha, who was the first to collect specimens.

Lowe surmised that the birds walked to the island on a since-sunken land bridge from Africa or South America, but the later discovery of plate tectonics ruled out that idea, Stervander said.

“We found obviously that the birds did not walk by foot,” he said. “They flew or were assisted by floating debris. Whether they flew all the way or were swept off by a storm and then landed on debris, we can't say. In any case, they managed to make it from the mainland of South America to Inaccessible Island.”

Using modern sequencing of mitochondrial and nuclear DNA and phylogenetic methods, Stervander's team tied the island's rail to the South American dot-winged crake, a rail species known as Porzana spiloptera. The split came 1.5 million years ago, with the rail colonizing Inaccessible Island in a single migration, the team concluded in a paper put online Oct. 12 by the journal Molecular Phylogenetics and Evolution.

Their genetics also make them relatives of black rails (Laterallus jamaicensis) found in the Americas and likely the Galapagos crake (Laterallus spilonota), which also has a reduced flight ability.

Stervander's team recommends that the Inaccessible Island rail species be reclassified in the genus Laterallus as are the related species.

“We are sorry to be suggesting that we take away this beautiful name, Atlantisia, which is something we can all love, but we can now say that the closest relatives of this species are American birds that were given their name before the Inaccessible Island rail,” Stervander said.

When the birds arrived at the island, they found three predator-free habitats — grasslands, tree fern bogs and woodland — and abundant food sources, including worms, moths, berries and seeds. Soon after, the reclusive birds no longer needed strong wings for survival and evolved into a flightless species, he said.

Stervander visited the island once, traveling by ship and helicopter in 2011, while a doctoral student at Sweden's Lund University. His research built on earlier efforts by study co-author Peter G. Ryan of the University of Cape Town.

The genetic analyses began while Stervander was at Lund University and was completed using computational resources at the UO, where Stervander is doing research under a three-year fellowship from the Swedish Research Council.

The island's rail population, Stervander said, is in a delicate situation. While some 5,500 mature birds now thrive on the island, an accidental introduction of rats or other predators could destroy them. Fossils found on other islands suggest that numerous other flightless rail species had been there but fell to predation with the arrival of humans.

The rail is classified as vulnerable on the International Union for Conservation of Nature's red list of species threatened with extinction.

The paper's other two co-authors are Martim Melo of the University of Cape Town and the CIBIO Research Centre in Biodiversity and Genetic Resources in Portugal, and Bengt Hansson of Lund University.

Note: The UO is equipped with an on-campus television studio with a point-of-origin Vyvx connection, which provides broadcast-quality video to networks worldwide via fiber optic network. There also is video access to satellite uplink and audio access to an ISDN codec for broadcast-quality radio interviews.

Institute of Ecology and Evolution: https://ie2.uoregon.edu/