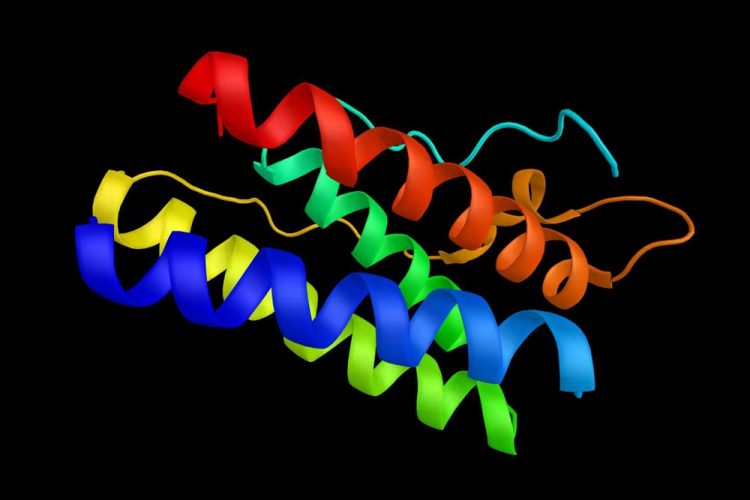 Leptin, the 'satiety hormone' made by adipose cells that helps to regulate energy balance by inhibiting hunger. Opposed by the actions of the hormone ghrelin, the 'hunger hormone.' Credit: Texas Biomed

The global obesity epidemic is so far-reaching it now has an overarching name: globesity. Texas Biomed Staff Scientist Raul Bastarrachea, M.D., is part of a team that discovered a new mutation in the gene that regulates the key hormone suppressing hunger called leptin.

This new mutation could help researchers understand why people develop excess of body fat. Dr. Bastarrachea's research is aimed at helping tackle metabolic disorders like cardiovascular disease and diabetes which are fueled by obesity and impact millions of people around the world.

“We keep learning more and more about the role of fat in normal-weight people,” Bastarrachea said. “By researching what goes wrong when genes don't code correctly for the production of leptin, we are coming closer to answers that could help millions of people with metabolic disorders.”

In the field of metabolic diseases, the pinpointing of the protein Leptin in the year 2000 was a huge breakthrough. Researchers at Rockefeller University found this hormone was missing in rats that randomly became extremely fat in a laboratory setting.

Humans also need adequate leptin circulating levels to inform the brain that their body fat content is enough and they do not need to keep eating more food. In other words, leptin signals mammals to stop eating.

Leptin is a protein produced by fat cells (also known as adipose tissue). It travels through the circulation to the brain where the hormone hooks up to a leptin receptor in the hypothalamus to signal to the body that there is enough fat and no more food is needed. In other words, it is a hunger-suppressing hormone. The name leptin is derived from the Greek work “leptos” meaning thin. It is sometimes referred to as the “Fat Controller.”

A congenital leptin deficiency is a recessive genetic disorder associated with severe early-onset obesity. In an article in the journal Genes, Dr. Bastarrachea and his co-investigators examined the case of two sisters in Colombia who started off their lives as normal weight babies but who quickly suffered from childhood-onset severe obesity. Prior cases have studied people whose genetics can be traced to Pakistan, Turkey, Egypt, India and China. This is the first case studied in the Americas.

What scientists found is that these two women – now in their 20s – have a mutation in the leptin gene on chromosome 7. The sisters' leptin levels were so low they were below the detection limit of the manufactured test kit.

The gene mutation caused the Leptin proteins to be “misfolded,” rendering them ineffective and destroying their function.

When researching the genetics of the family, scientist noted these women were children of lineal consanguinity which means several generations before them married blood relatives. This is a common practice in about a fifth of the world population, mostly in the Middle East, West Asia and North Africa. However, health risks for children of these unions include rare diseases caused by recessive genes.

While more work is needed to figure out how to combat leptin deficiencies on a large scale, the two Colombian women are in the queue to take Metreleptin – a synthetic analog of leptin – a very expensive injected drug. Its effects, however, can be quite dramatic and life changing.

With obesity now a global problem, scientists around the world are searching for ways to keep the issue from becoming a healthcare burden for years to come. Texas Biomed is playing an important role.

Texas Biomed is one of the world's leading independent biomedical research institutions dedicated to advancing health worldwide through innovative biomedical research. The Institute is home to the Southwest National Primate Research Center (SNPRC) and provides broad services in primate research. SNPRC contributes to a national network of National Primate Research Centers (NPRCs) with specialized technologies, capabilities and primate resources, many of which are unique to the SNPRC. The Center also serves investigators around the globe with research and technical procedures for collaborative projects. For more information on Texas Biomed, go to http://www.TxBiomed.org or for more information on SNPRC, visit http://www.SNPRC.org.