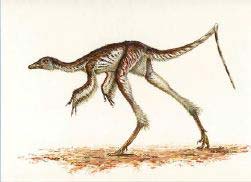 Tyrannosaurus rex, Apatosaurus and the other dinosaur giants capture the popular imagination. But paleontologists often focus on smaller fry – especially with regard to the origin of birds, which are believed to have evolved from petite, predatory dinosaurs. Researchers describe one such specimen — the partial skeleton of a previously unknown genus of chicken-size dinosaur that roamed China’s Liaoning province nearly 130 million years ago — today in the journal Nature. According to the report, the novel beast belongs to the troodontid family of dinosaurs and suggests that certain birdlike features arose far earlier than scientists had suspected.

Dubbed Sinovenator changii, the new fossil comes from the same region that last year yielded the spectacularly complete remains of a feathered dinosaur. According to team member Peter Mackovicky of Chicago’s Field Museum, Sinovenator — a close relative of the similarly aged bird Archaeopteryx — probably had feathers, too, although none are preserved in this specimen. The oldest and most primitive troodontid yet found, Sinovenator exhibits several features — its small size, for example —that do not appear in later troodontids but do appear in dromaeosaurids (close relatives of birds) and birds themselves. Troodontids, the researchers say, eventually lost these characteristics as they became bigger.

“It demonstrates that major structural modifications toward birds occurred much earlier in the evolutionary process than previously thought,” Mackovicky asserts. “Furthermore, these findings help counter, once and for all, the position of paleontologists who argue that birds did not evolve from dinosaurs.”