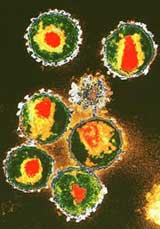 A new AIDS vaccine could be one of the most promising yet. The drug’s effects in monkeys suggest that killing virus-laden cells may form a key part of future vaccination strategies.

Vaccinated monkeys survived a usually lethal infection with a monkey-human hybrid virus, SHIV. Their primed immune system kept virus levels below detection, Emilio Emini of Merck Research Laboratories in West Point, Pennsylvania, and his team now report1. The results are some of the most encouraging to come out of AIDS vaccine research.

But doubts have already been voiced. Low-lying virus can change to elude the immune response, argue Dan Barouch of Harvard Medical School in Boston and his team. A year after they gave eight animals a similar vaccination, a mutant form of the virus emerged, killing one of the monkeys2.

“This finding should be a reality check rather than a death knell,” Barouch says, adding that the technique can be modified to block the emergence of mutant viruses. Future attempts could hit several different SIV proteins to prevent the virus escaping. Both of the latest vaccines targeted a single protein.

Emini is already pursuing this goal. But like multi-drug-resistant bacteria, HIV could conceivably outwit even a broadly targeted vaccine, although this is less likely. Whether the vaccines tested in the monkeys will be as effective in humans, however, is unknown.

AIDS is notoriously difficult to vaccinate against. Initial attempts took a conventional approach by injecting a single HIV surface protein to trigger the animals’ immune system into producing antibodies that would attack the virus during a subsequent infection. But HIV evades antibodies by hiding the proteins that the antibodies latch onto and by evolving new strains.

“HIV turned out to be much more complicated,” says vaccine researcher Jeffrey Lifson of the National Cancer Institute at Frederick, Maryland. In the past few years, vaccine hunters have switched to a different tack that simulates the way the body naturally attempts to deal with HIV infection – namely, stimulating the immune system to strike virus-infected cells.

Unfortunately, as with any vaccine that keeps virus levels in check, rather than preventing infection, there is the risk that the pathogen will re-emerge. “It’s an ominous question to ask about the whole strategy,” comments Lifson. Nonetheless, such a vaccine could in theory defer the onset of AIDS and cut the risk of HIV spreading.

The antibody approach may still bear fruit if it can hit essential, unchanging parts of the virus. Meanwhile, the ultimate ideal remains a vaccine that triggers both arms of the immune system – antibodies and cell attack.