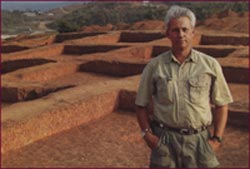 McMaster geochronologist Jack Rink has determined that a gigantic ape which became extinct 100,000 years ago co-existed alongside humans.

A gigantic ape, measuring about 10 feet tall and weighing up to 1,200 pounds, co-existed alongside humans, a geochronologist at McMaster University has discovered.


Using a high-precision absolute-dating method (techniques involving electron spin resonance and uranium series), Jack Rink, associate professor of geography and earth sciences at McMaster, has determined that Gigantopithecus blackii, the largest primate that ever lived, roamed southeast Asia for nearly a million years before the species died out 100,000 years ago. This was known as the Pleistocene period, by which time humans had already existed for a million years.

“A missing piece of the puzzle has always focused on pin-pointing when Gigantopithecus existed,” explains Rink. “This is a primate that co-existed with humans at a time when humans were undergoing a major evolutionary change. Guangxi province in southern China, where the Gigantopithecus fossils were found, is the same region where some believe the modern human race originated.”

Research into Gigantopithecus blackii began in 1935, when the Dutch paleontologist G.H. von Koenigswald discovered a yellowish molar among the “dragon bones” for sale in a Hong Kong pharmacy. Traditional Chinese medicine maintains that dragon bones, basically fossil bones and teeth, possess curative powers when the fossils are ground into a fine powder, and ingested.

For nearly 80 years, Gigantopithecus blackii has intrigued scientists, who have pieced together a description using nothing more than a handful of teeth and a set of jawbones.

“The size of these specimens – the crown of the molar, for instance, measures about an inch across – helped us understand the extraordinary size of the primate,” says Rink. Sample studies further revealed that Gigantopithecus was an herbivore, feasting mainly on bamboo. Some believe that the primate’s voracious appetite for bamboo ultimately placed him at the losing end of the evolutionary scale against his more nimble human competition.

Rink’s discovery coincides with an invitation to join the renowned New York-based Explorers Club. Established in 1904, the Club’s seven founding members included two polar explorers, the curator of birds and mammals at The American Museum of Natural History, an archaeologist, a war correspondent and author, a professor of physics and an ethnologist. Sir Edmund Hillary is Club’s honorary chairman. Membership includes an eclectic range of field scientists and explorers from more than 60 countries. Rink joins McMaster colleagues Hendrik Poinar (associate professor, Anthropology) and Ed Reinhardt (associate professor, Geography and Earth Science) who are also members.

Rink is currently in Thailand exploring an area where it is believed Gigantopithecus also roamed. Rink returns to campus on November 19.