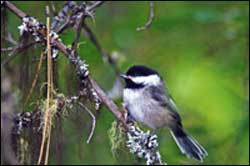 There’s more than meets the human ear when the black-capped chickadee lets its flock mates know a predator is lurking about by giving out its familiar “chick-a-dee-dee-dee” call.

The small songbirds, which are common throughout much of North America, use that signature call in a wide variety of social interactions including warning of predators. And it turns out that those alarms are far more subtle and information-packed than scientists previously imagined.

Writing in the current issue of the journal Science, researchers report that chickadees use one of the most sophisticated signaling systems discovered among animals. The calls warn other chickadees not only if a predator is moving rapidly, but also transmit information on the degree of threat posed by stationary predators of different sizes.

Chris Templeton, a biology doctoral student at the University of Washington and lead author of the study, said chickadees produce two very different alarm signals in response to predators. When they see flying raptors – birds of prey such as hawks, owls and falcons – they produce a soft, high-pitched “seet” call. But when they see a stationary or perched predator, the birds use a loud, wide spectrum chick-a-dee-dee-dee alarm to recruit other chickadees, as well as other bird species, to harass or mob the predator. Spectrographic analysis of more than 5,000 recorded chickadee mobbing alarm calls made under semi-natural conditions showed that the acoustic features of the calls varied with the size of the predator. And when the recordings were played back to the birds through speakers, their mobbing behavior was related to the size and threat presented by the potential predator.

Templeton said chickadees can alter their mobbing calls in a number of ways, most of which humans can not hear. Most typically they change the dee dee dee not at the end of the call, sometimes adding five, 10 or 15 dees.

“You would certainly might notice a change in the number of dee notes in their call if a neighbor’s cats was around harassing them. With something really dangerous, such as a pygmy-owl perched near some chickadees in our aviary, we heard as many as 23 added dees,” he said.

The research was triggered when Templeton noticed the chickadees responding differently to a variety of predators inside an aviary. So the researchers set up an outdoor experiment in a semi-natural aviary with 15 different live perched or leashed predators.

Thirteen of these were raptors. Two were mammals, a domestic cat and a ferret, which resembles weasels that prey on small birds.

The birds of prey ranged in size from large owls, such as the great gray owl and great horned owl that usually feed on small mammals, to the small pygmy-owl and the American kestrel that hunt small mammals and birds. The smaller raptors represent a greater threat to the agile chickadees than the larger ones because they are more maneuverable in flight and can readily catch small birds.

The chickadees also were exposed to a perched bobwhite quail, a non-predatory species, as a control animal, and did not react to it.

He noted that the chickadees are assessing risk on the basis of body size, but since they don’t react to the bobwhite quail, they also seem to be assessing individual species.

In the future, Templeton would like to examine the chickadee’s “seet” calls to see if they change in response to different raptors flying above them. If they do, this would be even more impressive since the birds would have such a brief glimpse as a predator flew by.