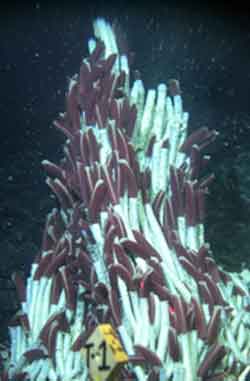 Charles Fisher, Penn State and Pat Hickey, Woods Hole Oceanographic Institution - Permission is granted for one-time use to illustrate articles about this research only. <br>This is an image of a group of the giant hydrothermal vent tubeworm, Riftia pachyptila, taken around 2500 m at 9ºN along the East Pacific Rise (Pacific Ocean). The red portion of the worm exposed at the top of the white tube is the gas exchange organ, or plume. This is where sulfide and oxygen enter the worm and bind to the hemoglobins. The plume gets its deep red color from the large extracelllular hemoglobins circulating throughout the worm.

The discovery that zinc contained in the hemoglobin of deep-sea tubeworms is used to bind and transport nutrients to symbiotic bacteria will be published online in the Proceedings of the National Academy of Science during the week of 14 February 2005. Further research with the hemoglobin could lead to its use in a variety of ways, including as an artificial substitute for oxygen carriers in human blood.

Tubeworms living near hydrothermal vents and cold seeps in the world’s oceans must adapt to sulfide levels that would prove lethal to most aquatic life while simultaneously providing hydrogen sulfide molecules to symbiotic bacteria within their bodies. A Penn State research team, in collaboration with researchers at the University of Massachusetts Medical School in Worcester and in the United Kingdom, reports a new mechanism for sulfide binding in the hemoglobins, the same molecules that carry oxygen to the worm’s own cells. The research team reports that zinc ions in the hemoglobin bind hydrogen sulfide, the first example of any hemoglobin incorporating a metal specifically for that purpose.

“The worms need to bind free sulfide so that it doesn’t react with oxygen, to reduce sulfide exposure in their tissues, and to provide the sulfide to the bacteria that, as far as we know, provide all of the worm’s nutritional needs,” says Charles Fisher, professor of biology at Penn State, whose research team includes Penn State graduate assistant Jason Flores, the lead author of the research paper, and William Royer, professor of biochemistry and molecular pharmacology at the University of Massachusetts. “Our discovery, which results from a very multi-disciplinary approach, replaces the current paradigm for the evolution of worm hemoglobin by demonstrating that hydrogen-sulfide molecules are bound by a metal ion rather than by an arrangement of amino acids.”

In addition to a very large hexagonal hemoglobin, typical of many worm species, the deep-sea hydrothermal vent tubeworm, Riftia pachyptila, has a second, smaller hemoglobin. The research group characterized this second hemoglobin by X-ray crystallography, providing the first such detailed structural information of a protein from a hydrothermal-vent animal.

Hydrothermal-vent species must adapt to conditions of pressure and chemicals that are toxic to most other animals. While the worms are able to absorb the oxygen and sulfide through their gills, they have no organs for capturing or digesting food. Their only known source of nutrition comes from internal bacteria, which, in turn, rely on the worm’s hemoglobin for both sulfide and oxygen. The unusual form of hemoglobin gives the worms an advantage over other organisms competing for space near the vents and may play a role in their ability to adapt to a wide temperature range.

“The hollow spherical structure in the hemoglobin of this species includes 12 zinc ions in depressions at the outer part of the molecule,” explains Flores. “These ions form a reversible bond with the hydrogen sulfide molecules that could block the oxygen-carrying sites, allowing the molecule to simultaneously carry oxygen and sulfide.”

Flores says that the hollow spherical structure is unique. “Human and other hemoglobins have a ’globular’ form, but none have been discovered with this symmetrical sphere. This sphere is a very stable shape, which may be part of the adaptation for the extreme conditions in which these worms thrive.”

Because zinc is the second most utilized transition metal (after iron) in biological systems, the characterization of this hemoglobin’s structure, assembly, and function could provide a starting point for other studies into the incorporation of metal ions into biological functions. The structure also could prove a useful means of sulfide transport for chemical synthesis and detection systems. In addition, the hemoglobin itself could have medical applications. Recent medical studies have focused on the worm’s large hexagonal hemoglobins as possible substitutes for oxygen carriers in human blood. “The newly characterized molecule is substantially smaller than the hexagonal hemoglobin, reducing problems of removal by kidney filtration, but still has six times as many active oxygen-carrying sites as human hemoglobin,” Flores adds.