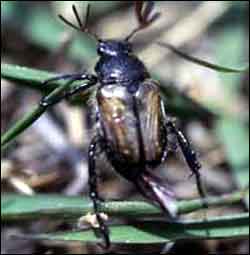 Science can put a dent in the sex life of a scarab beetle by blocking its ability to pick up female scent, according to Walter Leal, professor of entomology at UC Davis. The research could eventually lead to methods to control insect pests without affecting harmless or beneficial insects.

“Chemical communication is the prime means of communication in insects,” Leal said. If those communications can be controlled in the environment, insect pests could be prevented from breeding, he said.

Female pale-brown chaffers, a scarab beetle that is an agricultural pest in Japan, release a chemical signal or pheromone to attract males.

Insects smell through their antennae. Inside the antennae, pheromone molecules hit a specific switch that sends a nerve signal to the insect’s brain. Before the switch can fire again, it must be reset by removing the pheromone, like a wine-taster rinsing her palate.

As they fly toward the female, the male beetles come across wafts of pheromone separated by periods of no scent. To get an accurate reading and stay on course, the beetle must constantly reset its pheromone detection system.

Leal worked with Martine Maibeche-Coisne and Emmanuelle Jacquin-Joly at the Institut National de la Recherche Agronomique in Paris, France; Alexander Nikonov at the National Institute of Agrobiological Sciences in Tsukuba, Japan; and Yuko Ishida at UC Davis. They identified an enzyme called CYP4AW1, expressed in the antennae, that breaks down the pheromone.

When beetles were exposed to both pheromone and metyrapone, a chemical that specifically blocks the enzyme, they could smell the pheromone at first but then could not reset their antennae. They were unable to smell new doses pheromone for several minutes.

The treatment had no effect on other insects, because the enzyme is very specific to that pheromone, Leal said.

The same principles could be applied to agricultural pests and to disease-carrying mosquitoes, he said. For example, female mosquitoes find hosts by smell and use pheromones to guide other females to good egg-laying sites.

The work was published July 26 in the Proceedings of the National Academy of Sciences of the USA online.