Evolution At A Snail’s Pace 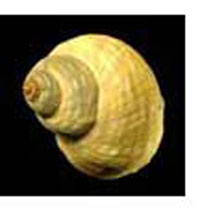 Most visitors to the seaside are content to ride donkeys, eat ice cream, and build sandcastles. But, University of Leeds scientists have no time for sunbathing; they are witnessing the birth of a new species on the rocky shores of North Yorkshire.

Littorina saxatilis (right) is an unremarkable rough periwinkle – a small, grey-brown sea-snail which litters the coast by the million. But it has overcome its lack of charisma and grabbed the attention of scientists trying to unlock the secrets of evolution.

Biologist John Grahame (left) said: “This is an example of evolution in action, and we are increasingly certain that we are seeing one species become two.”

Evolution is a slow business at the best of times, and the process of speciation – the division of one species into two – takes millennia. The best scientists can hope to see is that two forms or ‘morphs’ within a species are moving apart, and becoming genetically distinct.

Down on beaches at Flamborough, Filey Brigg and Ravenscar, Dr Grahame and colleagues have shown that there are two distinct morphs of L. saxatilis inhabiting different parts of the beach, and the basis for the difference is genetic.

The really exciting development – the holy grail of speciation – is evidence that the morphs are becoming reproductively isolated and no longer freely interbreeding. Individual snails prefer to mate with others of the same morph, and when interbreeding does happen, the viability of the young is reduced.

“There are alternative explanations”, says Dr. Grahame, “and the process could easily be reversed. The point of no return, when we can truly say a new species has been born, will come when there is no interbreeding at all, and no gene flow between the morphs.”

The researchers are currently analysing genetic differences between morphs, and aim to relate the DNA sequence differences to physical characteristics.

Rough periwinkles are a favourite food of crabs, and it is likely that the two morphs use different strategies to stay off the menu. Crab ‘resistors’ are the thick shelled morph, found low on the beach where crabs are common, while thin shelled crab ‘avoiders’ are found higher up the shore.

This shows remarkable similarity to the evolutionary history of other periwinkles, such as the flat periwinkle species found in our waters, one of which is a crab avoider, the other a crab resistor. Dr. Grahame believes Littorina saxatillis is following slowly in their footsteps.