Home / Life Sciences / Espionage May Have Driven The Evolution Of Bee Language According To UCSD-Led Study In Brazil
16.06.2004 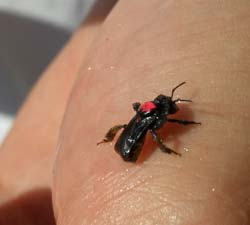 A discovery by a University of California, San Diego biologist that some species of bees exploit chemical clues left by other bee species to guide their kin to food provides evidence that eavesdropping may be an evolutionary driving force behind some bees’ ability to conceal communication inside the hive, using a form of animal language to encode food location.

Bees can use two main forms of communication to tell their hive mates where to find food: abstract representations such as sounds or dances within the hive or scent markings outside the hive to mark the food and/or the route to it. In 1999, James Nieh, an assistant professor of biology at UCSD, published a paper in which he hypothesized communication within the hive may have evolved as a way of avoiding espionage by competitors.

Nieh’s most recent study, a collaboration with Brazilian biologists published June 16 in the early on-line version of the journal Proceedings of the Royal Society, is strong support for that hypothesis because it shows that bees can indeed use the chemical markings deposited by bees of other species to home in on and take over their food source. The paper will appear in print in Proceedings of the Royal Society in August.

“We show that foragers of an aggressive species searching for an unscented food source at a new location, detected and preferentially oriented to odor marks deposited by a competitor and then rapidly dominated the food source, killing or driving off all of the competitors within ten minutes,” says Nieh. “The ability of foragers to communicate food location within the confines of the hive, where other bees cannot eavesdrop, would be a clear evolutionary advantage where floral resources are seasonally scarce.”

Nieh along with Felipe Contrera and Vera Imperatriz-Fonseca from the University of São Paulo, Brazil and Lillian Barreto from Agricultural Development Agency of the the State of Bahia, Brazil studied interactions between two species of bees, Trigona spinipes and Melipona rufiventris. Both species are stingless bees, a diverse group prevalent in South and Central America. Because Trigona spinipes is a highly aggressive species, the researchers hypothesized that if these bees could use olfactory eavesdropping they would be able to gain control of a food source that competitors had discovered and identified with scent markings.

“These bees (Trigona spinipes) are so aggressive that they attack Africanized honey bees—popularly known as killer bees—and even attack several species of birds, driving them off flowers,” says Nieh. “In our study, we observed that when they took over the food source from the victim species (Melipona rufiventris) they used a range of forms of aggression from threats to intense grappling followed by decapitation.”

In their experiments, the researchers trained bees of each species to feed at separate dishes of unscented sugar water more than 100 yards away from each other. On discs of paper, the researchers collected scent markings from bees of each species as they were feeding. Scent markings are glandular secretions from bees’ heads or other body parts that many bee species use to indicate a food source. The researchers then covered the original feeder of either the aggressor or victim species and put out dummy feeders at a new location with paper marked by bees of their own species, paper marked by the other species, or unmarked paper. Bees of both species were able to distinguish their kin’s odor marks from the marks of the other species.

In their paper, the researchers point out that the bees’ responses are adaptive in both cases. The victim species avoids attack by avoiding resources marked by the aggressor species. On the other hand, exploiting the discoveries of other species provides the aggressor species with a steady means to find new rich food sources.

Bees are among a very limited number of species, besides humans, able to abstractly encode information about the physical world into signals understood by receivers. While scientists do not know what kind of communication the two species of bees employ within their hives, Nieh says his team’s finding that they are able to spy on each other’s olfactory markings sheds light on the long-standing mystery of why some other stingless bees and honeybees evolved one of the most sophisticated forms of animal language, strategies that would allow them to inform their kin about distance and direction to a food source while inside the hive.

Funding for this research was provided by the National Science Foundation, the University of California Academic Senate and the Heiligenberg Chair Endowment at UCSD.