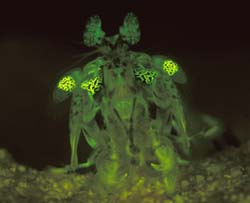 The mantis shrimp Lysiosquillina glabriuscula in threat posture, photographed near Key Largo. The stomatopod was photographed in blue light with a yellow filter (above) to show only the fluorescence, similar to what other mantis shrimp see at depth. Below is the same animal in white light, as would be seen near the surface. (Credit: Roy Caldwell) <br>

The tropical mantis shrimp has the most sophisticated eyes of any creature on the planet, yet it often lives at murky depths where the only light is a filtered, dim blue. Why does it need such complex vision?

Marine biologists and physiologists have now discovered at least one use for these eyes in the deep, blue ocean: to see the fluorescent markings mantis shrimp use to signal or threaten one another.

The shrimps’ characteristic spots are easy to see in shallow water but only dimly visible 40 meters (131 feet) down, so on the ocean floor the crustacean’s spots fluoresce yellow-green to enhance their prominence in the dim blue light.

Though fluorescence in marine animals is common – in corals and squid, for example – this is the first documented case of fluorescence used in signaling in the sea. Fluorescence occurs when a pigment absorbs one color of light, in this case blue, and emits a different color, such as yellow-green.

“If you look at this animal in shallow water or in bright white light, you pick out this set of yellow-green spots it uses in species recognition, and probably in mating as well – it’s a typical signal that says, ’Here I am, I’m a Lysiosquillina glabriuscula,’” said marine biologist Roy Caldwell, professor of integrative biology at the University of California, Berkeley. “But this animal also occurs at 40 meters, where there’s no yellow light for that pigment to reflect, so that species-specific signal should be gone. But when you go down to 40 meters and you look at it, the yellow spot is still there.”

“The stomatopod (or mantis shrimp) apparently is using a yellow-green fluorescence to maintain visual constancy of a species-specific signal,” Caldwell said in a phone interview from Brisbane, Australia, where he is on sabbatical.

Caldwell and coauthors Charles Mazel of Physical Sciences Inc. in Andover, Mass., Thomas Cronin of the University of Maryland, Baltimore, and Justin Marshall of the University of Queensland, Brisbane, Australia, reported their findings in a brief note in the Nov. 13 Science Express, a rapid electronic publication service of Science magazine.

“The case we have made is one of the best cases yet for understanding fluorescence in the underwater world,” said Mazel, who discovered the fluorescing mantis shrimp using an underwater lighting and video system he developed and markets through a company he founded, NightSea, a subsidiary of Physical Sciences Inc. Mazel said that coral and squid and mantis shrimp aren’t the only marine creatures that fluoresce: bristleworms, anemones and the occasional shrimp and fish also emit light, though probably not as a functional part of behavior.

The authors note that “Fluorescent signal enhancements are used by humans as well, both in ambient illumination (e.g. traffic safety cones, highlighter pens) and with ultraviolet augmentation (e.g. shop window displays, tattoos for the disco).”

Though the team reports on only one species of stomatopod, L. glabriuscula, a 22-centimeter (8.5-inch) crustacean that occurs throughout the western Atlantic, from the Carolinas to Brazil, the fluorescence is apparently a common characteristic of many other species of these crustaceans.

“It turns out that that Lysiosquillina glabriuscula was just the tip of the iceberg,” Caldwell said. “We are seeing fluorescence in all different sorts of stomatopods. Practically every one we look at has some signal.

“Most people don’t have a clue what these fluorescence patterns in other organisms might mean, if they mean anything at all. In fact, if you go out and look at coral and algae and algae in corals at 30 to 40 meters, you see all different kinds of colors – greens and oranges and yellows. It’s probably just a byproduct of the pigments that are used.”

But stomatopods are different.

Caldwell, Cronin and Marshall have collaborated for 15 years in the study of stomatopod eyes and their color vision system, and have documented the system’s amazing range. Human eyes use three visual pigments in color vision, each of which responds to light of a different color by sending signals to the brain, which recreates a richly colored world. Some stomatopods, however, have at least eight pigments sensitive to various visual wavelengths and three more sensitive to ultraviolet light. Plus, they have four filters that tune those visual pigments, and they see two or three planes of polarized light.

“It’s been blowing us away for years how complex the stomatopod visual system is,” Caldwell said. “There’s no question this is the most complex eye in the animal kingdom. It has the same capability in the ultraviolet alone that we have in normal light. The mystery is, why do they need such a complex eye?”

One simple explanation is that these animals need complex signaling because they’re so dangerous. Mantis shrimp spear or club their prey and have been known to break aquarium glass with their heavy, calcified clubs. They can easily kill an opponent with a single, well-placed blow, Caldwell said.

Another explanation is that, because they have small brains, complex visual processing must be done in the eye’s receptor, whereas our much larger brain is able to integrate and process three color signals into a rainbow of colors.

But these explanations are not entirely convincing, Caldwell said.

“Based on our recent work, these animals have a lot more to see than we thought,” Caldwell said. “Their signals are just a lot more complex than we ever imagined, because they have these detection systems that we don’t have. They have polarized light signals we can’t see, and now we find they have fluorescence signals we barely see. In fact, we show that one set of receptors in this stomatopod eye is specifically tuned to look at that yellow-green wavelength and pick out that signal.”

Mazel accidentally discovered the fluorescence last year while diving with his underwater lighting and photography system. While he and a crew were videotaping the nighttime fluorescent world off the Bahamas, a large L. glabriuscula emerged from its burrow and displayed two bright “headlights.” Mazel drew it to the attention of Caldwell’s team, and during a subsequent trip last fall to the National Undersea Research Center in Key Largo in the Florida Keys, Caldwell photographed more of these stomatopods. His method involved flashing a blue light and viewing the scene through a yellow filter that removes the blue light but lets through the fluorescing colors – red, green and yellow.

“The pigments are taking in the blue light that is present at that depth and turning it into yellow to maintain the signal,” he said.

He and his colleagues found that the color emitted by the fluorescing skin pigments overlaps exactly with the sensitivity range of one of the receptor sets in the stomatopod’s eye.

“This is most interesting where we have a species living over a fairly broad depth range,” he said. “However, in animals that live only in deep water, fluorescence allows them to expand their signaling system to use more color, since they have such good visual systems.”

How animals use fluorescence in signaling their own or other species is an area only now being explored, Caldwell said. Marshall last year showed that in some parrots, fluorescence in their feathers plays a role in behavior.

Though most underwater creatures, including crustaceans, octopi, squid and many fish, have limited or no color vision, those that do can take advantage of fluorescence to expand their range of behavioral signals.

The work was supported by the National Undersea Research Center at the University of North Carolina, Wilmington, as well as the U.S. Office of Naval Research, the National Science Foundation, the Australian Research Council and Lizard Island Research Station.