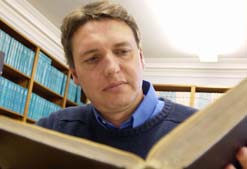 Professor Pearson, of the University’s School of Earth, Ocean and Planetary Sciences

Writing in this week’s issue of Nature, Professor Paul Pearson relates how he discovered an account of the theory – regarded as one of the most important in the history of science – in a rare 1794 publication by geologist, James Hutton. Darwin’s Origin of Species was published in 1859. Professor Pearson tracked down a copy, which runs to three volumes and more than 2000 pages, in the National Library of Scotland. Couched in the middle of the second volume is a whole chapter on the selection theory. It supplements an earlier discovery of a similar account in an unpublished manuscript by Hutton, the Elements of Agriculture.

In the Nature article, Professor Pearson explains how Hutton’s experiments in animal and plant breeding led him to observe that new traits arise in animals and plants in every generation. He appreciated that this “seminal variation” is passed on to the offspring, unlike the variety induced by differences in soil or climate.

Hutton went on to argue that “those which depart most from the best adapted constitution, will be most liable to perish”, whereas the best adapted survive to multiply the race. Thereby species would be continually adapting to local conditions, and also able to meet the demands of a changing environment. “Although he never used the term, Hutton clearly articulated the principle of evolution by natural selection,” said Professor Pearson. “However he specifically rejected the idea of transformations between species. For him, it was all about how separately created species adapt to their local conditions.”

Darwin always maintained, and his private notebooks have shown that he came to his selection principle independently of two earlier authors – Patrick Matthew (writing in 1831) and Williams Wells (writing in 1818).

Professor Pearson suggests: “It may be more than coincidence that Wells, Matthew and Darwin were all educated in Hutton’s home town of Edinburgh, a place famous for its scientific clubs and societies. “There is no question of Darwin knowingly stealing Hutton’s idea. But it is possible that an old half-forgotten concept from his student days later resurfaced, as he struggled to explain his many observations on species and varieties made voyaging around the world in HMS Beagle.

Darwin rightly gets the credit for applying the principle to the transformation of species and assembling the evidence that convinced the scientific world.”