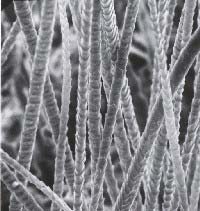 A group of scientists led by Dr. Elaine Fuchs at the Howard Hughes Medical Institute at the Rockefeller University have uncovered an unexpected new role for the well-known transcription factor, GATA-3, in hair follicle development. GATA-3 was previously identified for its role in coaxing hematopoietic stem cells towards a T-cell fate. Now, Dr. Fuchs and colleagues reveal that GATA-3 is also involved in epidermal stem cell specification. This finding lends valuable insight into hair follicle generation, and highlights intriguing parallels between the molecular cues that direct cell fate specification in the skin and the immune system.

Each of the roughly 5 million hair follicles that cover the adult human body has a similar structure. The hair follicle consists of a multi-layered hair shaft, the outermost layer of which is referred to as the cuticle. Below the skin surface, the cuticle is surrounded by an inner root sheath (IRS).

“The IRS acts as a channel, functioning to guide the developing hair shaft up to the skin surface. Without the channel, the hair does not develop properly,” explains professor Fuchs.

In an effort to understand how cells are directed towards an IRS fate, Dr. Fuchs and two MD/PhD students, Charles Kaufman and Diana Bolotin, used microarray analysis to monitor gene expression levels in the dorsal (back) skin of embryonic mice. GATA-3 emerged as one gene that was turned on during hair morphogenesis. Further work by Dr. Fuchs and colleagues revealed that the GATA-3 protein is specifically expressed in IRS cells of the hair follicle.

These findings, coupled with existing knowledge of GATA-3’s function as a master gene regulator of cell lineage specification in the immune system, posited GATA-3 as an attractive candidate for directing epidermal stem cells to become IRS cells.

To investigate the precise role of GATA-3 in hair follicle morphogenesis, Dr. Fuchs and colleagues turned to a strain of GATA-3-deficient mice to observe what defects, if any, appeared in these mice. However, since GATA-3-deficient mice die in utero well before hair follicles develop, Dr. Fuchs and colleagues used a drug rescue regime to help these embryos to survive until embryonic day 18.5, when at least the whiskers have matured. As suspected, these pharmacologically rescued GATA-3-null mice did, in fact, show a number of abnormalities in hair development.

Dr. Fuchs and colleagues discovered that GATA-3-deficient follicles fail to develop cells of the IRS, and as a result, generate hair with severe structural anomalies.

When Dr. Fuchs and colleagues grafted dorsal skin from pharmacologically rescued GATA-3-null mice onto GATA-3-normal mice, and thereby allowed the hair follicles more time to develop, they noticed further distortions. The GATA-3-null skin grafts failed to grow normal fur. Even after almost a month, the GATA-3-null grafts generated nothing more than short stubble. Furthermore, the hairs that did finally emerge were short, thick, and had an irregular cuticle pattern (see photo from electron microscopist, Dr. Amalia Pasolli).

“These studies bring us one step closer to understanding the key components that go into making a hair follicle. Over the past few years, we and others in the field have identified critical signals for making the hair itself. Now, we’ve uncovered an important missing factor in creating the channel, which must develop coordinately with the hair. In addition, the finding sheds new light on the striking parallels between how stem cells in the bone marrow and those in the skin undergo differentiation in the body.”