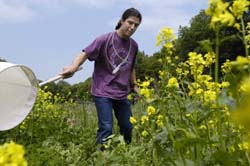 How vastly different animals arrive at the same body plan or pattern of ornamentation has long been a conundrum of developmental biology.

But now, thanks to the colorful derriere of a wild fruit fly, captured on a compost heap by a University of Wisconsin-Madison post-doctoral student, scientists have been able to document a rare example of molecular convergence, the process by which different animals use the same genes to repeatedly invent similar body patterns and structures.

Writing in the current issue (Aug. 21) of the journal Nature, a group led by Sean Carroll and Nicolas Gompel of the Howard Hughes Medical Institute (HHMI) at UW-Madison, describes the genetic mechanisms that control the colors and patterns on fruit fly abdomens. The study suggests that the simple modulation of a transcription factor, a protein that can bind to DNA and influence its activity, may be responsible for governing the diversity of body color patterns among related animal species.

Conveniently, the answer was found with the help of a wild fruit fly, captured by Gompel, a post-doctoral fellow. Pursuing his hobby of collecting and systematizing insects near a wooded tract close to Eagle Heights, a housing complex for UW-Madison students and their families, Gompel captured a wild fruit fly that looked very much like the species Drosophila melanogaster, the workhorse of many modern genetics laboratories.

By comparing the molecular workings of the captured fly, and other fly species snared or otherwise acquired by Gompel, the Wisconsin group was able to find genetic commonalities across 13 species covering the various branches of the fruit fly family.

They found that a common gene known as ’Bric-a-brac2’ is selectively influenced – tweaked by transcription factors – to produce a wide range of pattern and color pigmentation on the abdomens of fruit flies across many species.

The discovery of this example of molecular convergence, according to Carroll and Gompel, provides biologists with new insight into how genes that are shared by many animals can be used in different ways to influence body plans.

“We wanted to know, are these things crossing the same bridge to get to a desired destination,” Carroll explains. “The answer, we found, was yes and no. There are other ways across the river. ”

In some instances, Carroll and Gompel found that the genetic mechanism or bridge to influence the gene was blocked. “It was not open for business in some of these groups,” Carroll says. “But what we learned was that similar (body) patterns can evolve in both as animals use the same path or a different route” to the same end.

A related mechanism may be at work in the familiar ladybird beetle, Carroll suggests, as it is known that one can get “boatloads of different patterns using the same genes. In that case, diversity is accomplished through the same mechanism.

“You can take one (genetic) player, tinker with it and get all these different patterns,” he says. “But you can still get similar patterns without touching the same brush,” he says.

Diversity is a key point, says Gompel, because it is an important aspect of natural history, and its evolutionary and developmental bases are not well understood by biologists.

“If you look at other animals – cats, for instance – you’ll see a very broad range of color patterns that are just different overlays on the same body plan. You can extend this overlay rule to land snails, king snakes, hummingbirds, butterflies and so on,” he says.

Because the patterns are complex and their range is extensive, it is often assumed that the genetics that underpin them are complex. But the Wisconsin study, Gompel says, suggests that the molecular basis for such diversity can be narrowed down to a reasonably simple genetic game plan.

“We’ve looked at fly species that are in the same range of morphological divergence as the house cat, the leopard, the cheetah and the panther,” he says.

In that context, Gompel says, it demonstrates how a few genes, influenced in subtle ways, can control body decoration, coloring and patterning across the animal kingdom.