Name that tune: How birds learn to recognize song 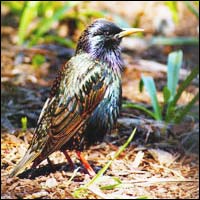 Researchers in a University of Chicago lab are peering inside the minds of European starlings to find out how they recognize songs and in the process are providing insights into how the brain learns, recognizes and remembers complex sounds at the cellular level. In a study published in the Aug. 7, 2003, issue of Nature, the researchers show how songs that birds have learned to recognize trigger responses both in individual neurons and in populations of neurons in the bird’s brain.

“We found that cells in a part of the brain are altered dramatically by the learning process,” said Daniel Margoliash, Ph.D., professor of organismal biology and anatomy and of psychology, and co-author of the paper. “As birds learn to recognize certain songs, the cells in this area become sensitive to particular sound patterns or auditory objects that occur in the learned songs, while cells never show such sensitivity to patterns in unfamiliar songs. Specific cells in the brain become ‘tuned’ to what the bird is learning.”

How the brain perceives and interprets stimuli from the external world are fundamental questions in neuroscience. There are many types of memory systems in the brain. Memories of words, sounds of voices or patterns of music are important components of human daily experience and are essential for normal communication, yet “we know little about how such memories are formed in the brain and how they are retrieved,” Margoliash said.

Bird songs have captured the interest of humans for ages. “Birders can often recognize many species of birds by only their songs,” he said.

For the birds themselves, however, song recognition is no casual business. The ability to match a singer to a song, often down to the level of an individual bird, can mean the difference between “a day spent wrestling through the thicket and one spent enjoying a sun-soaked perch, or the missed chance at mating with the healthiest partner around.”

Lead investigator of the study Timothy Gentner, Ph.D., a research associate in the department of organismal biology and anatomy, has tapped into the recognition abilities of songbirds by training birds in the lab to recognize songs. The birds were taught to press different buttons on a small metal panel depending on the song they heard. The researchers rewarded correct responses with food and turned the lights off to convey an incorrect response.

Gentner’s earlier research has shown that European starlings learn to recognize different songs by the individual pieces that comprise each song.

“If you listen closely to a singing starling, you’ll hear that the song is really composed of much shorter sounds,” Gentner said. “We call these sounds ‘motifs,’ and to produce a song, the bird will sing the same motif a few times, then switch to a new repeated motif, and then another, as long as he can keep it going. When male starlings sing, they might use only half of the motifs they know and then mix up the motifs when they sing another song.”

Given this highly variable motif structure, when other starlings are learning which songs belong to which individuals, they do it by concentrating on the motifs, he said. “Even one or two familiar motifs in an otherwise unfamiliar song is enough to trigger recognition.”

To examine the neural mechanisms associated with auditory memory, Gentner and Margoliash measured the electrical impulses from single nerve cells in the auditory area of the bird’s brain known as cmHV — an area analogous to the higher-order, secondary auditory cortex in humans — in starlings trained to recognize several songs.

“The song motifs that drive these cells so strongly are the same components of sounds that control recognition behavior in the birds,” Gentner said. “It appears that we are seeing the memory traces for recognition of these complex acoustic patterns. Rather than representing all motifs equally well at any time, we find that experience modifies the brain to highlight those motifs that are the most important to the bird at that time.”

“[These motifs] are the books that make up the starlings’ library of memories, and we’re learning how the starling represents those books in his brain,” Margoliash said.

“Memories are not permanent,” he said. “Do we lose memories because of disuse or because they are crowded out by other memories? Our research shows that the context in which you learn a sound affects how it is memorized. What are the brain mechanisms that control this process of how a memory is laid down?”

Margoliash and Gentner believe these are questions that can be answered in future research with starlings. Neuroscientists, and children learning language, are interested in the answers.