Home / Life Sciences / Evolutionary "fast-track" in which the hunted outwit their hunters, could explain why human diseases progress so rapidly
17.07.2003

Evolutionary "fast-track" in which the hunted outwit their hunters, could explain why human diseases progress so rapidly 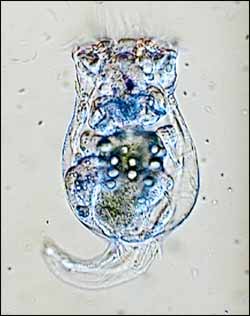 A water-dwelling rotifer (Brachionas calyciflorus) is surrounded by algae (Chlorella vulgaris) it hopes to eat by waving its cilia, at top, and drawing them into its mouth. In fresh water, these rotifers are barely visible as white specks while the microscopic algae are 100 times smaller. T.Yoshida and R.O. Wayne/Cornell University.

In the fishbowl of life, when hordes of well-fed predators drive their prey to the brink of extinction, sometimes evolution takes the fast track to help the hunted survive — and then thrive to outnumber their predators.

This rapid evolution, predicted by Cornell University biologists in computer models and demonstrated with Pac-Man-like creatures and their algae food in laboratory habitats called chemostats, could play an important role in the ecological dynamics of many predator-prey systems, according to an article in the latest issue (July 17, 2003) of the journal Nature .

Physicians, the Cornell biologists say, should keep this rapid evolution in mind when investigating interactions between diseases and victims. As one example, they say, it is useful in trying to understand how HIV, the AIDS virus, manages to evolve so swiftly that development of improved vaccines is extremely difficult.

“Evolution is not just about dinosaurs and apes, but it can occur much more rapidly than we previously thought. Rapid evolution is pervasive, and the list of examples is growing,” says Takehito Yoshida, a postdoctoral research fellow in Cornell’s Department of Ecology and Evolutionary Biology and lead author of the Nature article. Yoshida demonstrated the evolutionary principle with near-microscopic, multicelled animals called rotifers that live to gobble much tinier green algae. He notes, “We humans are part of complex ecosystems, and if we think we’re above the effects of evolution, we’re not looking close enough. If we want to understand epidemics and outbreaks of insects such as gypsy moths, we should not ignore the effect of evolution.”

Other Cornell authors of the Nature report, illustrated with a cover photo of a rotifer-eating algae and the headline “Fast Food,” are Laura E. Jones, a postdoctoral researcher, and Stephen P. Ellner, a professor of ecology and evolutionary biology, who conducted computer modeling of predator-prey dynamics; Gregor F. Fussmann, a postdoctoral researcher during the experiments and now a biologist at the University of Potsdam, Germany; and Nelson G. Hairston Jr., professor of ecology and evolutionary biology. The studies were supported by a grant from the Mellon Foundation.

The rotifers, Brachionas calyciflorus , and the algae, Chlorella vulgaris , were chosen for the experiment because they are the standard, well-documented “lab rats of freshwater predator-prey studies,” Hairston says. The eaters and the eaten lived together for months in transparent glass chemostats stocked with nutrients (for the algae) and water.

The Hairston research group had noticed that the highs and lows of predator and prey populations in the chemostats were occurring completely “out of phase,” says Yoshida. When rotifer populations were very high — because previously they had plenty of algae to eat, algal populations hit rock bottom, because they had been consumed almost out of existence. The opposite occurred when algae were super-abundant: There were almost no rotifers around to eat them. Hairston and his collaborators were seeing weeks go by between the very pronounced oscillations in predator and prey populations.

Computer models developed by Ellner and graduate student Kyle Shertzer predicted that only evolution on the part of the prey could account for the out-of-phase, prolonged oscillation effect. Jones and Ellner refined the models to make detailed predictions about the effects of prey evolution, and Yoshida and Fussmann ran experiments in chemostats under two kinds of conditions: In one, all the single-cell algae were genetically identical clones — essentially one-trick ponies that could not evolve their way out of a tough situation; in the second, the algal population was genetically varied so that somewhere among their tiny green gene pool might be an evolutionary innovation or two that could save them.

After running the chemostats for months and counting predator and prey populations day by day, the computer model’s prediction proved correct. Populations of a single algal clone quickly rose and fell almost in synchrony with the numbers of rotifers. But the algae with some genetic variation to draw on enjoyed longer periods when they were abundant and their predators were few — along with agonizingly long periods when they struggled to rebuild their populations.

Instead of millions of years, the algae were evolving in a few weeks. But exactly how had they changed?

“We’re not sure,” Hairston says. “We think that somehow they made themselves indigestible. They figured out how to pass straight through the rotifer gut without being digested and survived to make lots more of themselves. Rapid evolution got them out of a tight spot.”

In one respect the joke is on the fast-evolving algae, Hairston notes, because they had to give up something to become indigestible: They became slow-growing algae relative to their kin. As a result, the next time they compete for food resources, the slow-growing, hard-to-eat algae will be at a disadvantage, and the more edible algae will thrive, allowing the cycle to repeat indefinitely.

Ellner suggests that this cycle of rapid evolution — between defense and vulnerability — could have parallels in human diseases. “There’s hardly anyone left in our [human] population who had resistance or developed it during the 1918 flu epidemic,” he says. “Perhaps the time is now ripe for a return of those strains or their relatives.”

Jones sees some hope that medical researchers will come to recognize the role of rapid evolution. “HIV is evolving so quickly that researchers are struggling to make an effective vaccine. As we say in our report, evolution can substantially alter predator-prey dynamics. Attempts to understand population oscillations cannot afford to neglect the potential effects of ongoing, rapid evolution.”