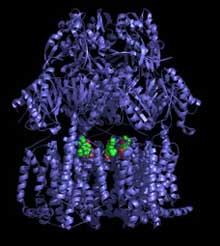 Even ciprofloxacin, an antibiotic used to treat a variety of bacterial infections including inhaled anthrax, is no match for AcrB. In this image, the green-colored drug is firmly ensnared in the protein’s cavity.

In the race to stay one step ahead of drug-resistant bacteria, scientists from Lawrence Berkeley National Laboratory and the University of California at Berkeley obtained high-resolution images of a protein complex found in bacteria that repels a wide range of antibiotics.

The images, which appear in the May 9 issue of Science, offer new insight into how bacteria survive attacks from different antibiotics, a growing health problem called multidrug resistance. As the team learned, these robust defenses are rooted in the protein complex’s remarkable ability to capture and pump out a spectrum of structurally diverse compounds. The research may inform the development of antibiotics that either evade or inhibit these pumps, allowing drugs to slip inside bacteria cells and kill them.

The team focused their inquiry on AcrB, a protein that resides in the inner membrane of Escherichia coli cells. It works in unison with two other proteins to rid the bacteria of toxins. Based on earlier research, they knew AcrB boasts a large cavity capable of binding with a vast range of antibiotics and other molecules. But precisely how this cavity accommodates so many shapes and sizes remained unclear. To witness this trickery, the team crystallized the protein in the presence of four molecules — an antibiotic, a dye, a disinfectant, and a DNA binding molecule — and then turned to Berkeley Lab’s Advanced Light Source (ALS). There, they exposed the crystals to extremely bright x-rays that reveal the protein’s molecular structure, including how the four molecules bind to the cavity.

The resulting images portray a hungry, indiscriminate binding site. Each molecule bound to different locations in the cavity, and each bond utilizes a different set of amino acid residues. And there’s probably room for many more types of interactions.

The 3.5 to 3.8-angstrom-resolution images (one angstrom equals one ten-billionth of a meter) provide the closest look yet of a phenomenon common to all living cells: the ability to expel a diverse flotilla of toxins using one pump. In healthy people, these so-called multidrug efflux pumps play important roles. A complex called P-glycoprotein, for example, prevents the entry of toxic molecules across the mucosal surface of the intestinal tract, as well as the blood-brain barrier. But P-glycoprotein has a dark side. When overexpressed, it makes cancer cells resistant to a wide range of chemotherapy drugs.

A similar split personality is seen in E. coli and its all-purpose pump. On the good side, harmless colonies of the bacteria inhabit animal intestines. In this environment, scientists theorize AcrB’s chief function is to trap and pump out toxic bile salt. Unfortunately, a mutated form of E. coli causes food poisoning. And, making matters worse, AcrB shields the bacteria from many more compounds in addition to bile salt, which explains why a broad regimen of antibiotics is needed to fight the infection.

“The protein is a bit too efficient for our own good,” McDermott says. “And our work demonstrates why. We suspect the protein’s cavity possesses areas where many types of antibiotics could be captured.”

Their research also underscores the need to pursue alternative ways of fighting drug resistance. Currently, pharmaceutical researchers combat resistance by tweaking an antibiotic’s molecular structure so it isn’t compatible with a pump’s binding site. This is difficult work to begin with, largely because antibiotics must adhere to strict potency and safety regulations that limit the extent to which they can be modified. Add to these restrictions a better understanding of AcrB’s readiness to bind with an array of compounds, including the most carefully engineered antibiotics, and the job appears even more difficult.

“Our work demonstrates that changing antibiotics to beat resistance is not a trivial task,” McDermott says.

Instead, McDermott believes their research supports another strategy in which the multidrug efflux pump is disabled. In E. coli, such monkey wrenching is possible because AcrB connects to a funnel-shaped protein embedded in the bacteria cell’s outer membrane. This protein ejects the antibiotics trapped in the AcrB cavity. If it’s blocked, the pump can’t work. As McDermott explains, perhaps a specially designed molecule could lodge inside the funnel, rendering the pump useless and allowing antibiotics to slip inside the cell unhindered.

To support these advancements in drug design, the team will next use the ALS to more fully explore how AcrB binds with a structurally diverse range of antibiotics. They believe a fuller understanding of E. coli’s multidrug efflux pump will shed light on similar pumps found in other harmful bacteria, which could lead to better treatments for a variety of infections.

“Drug resistance has become a global problem,” McDermott says. “Our research will help design drugs that reduce resistance to antibiotics.”

In addition to McDermott, Helen Zgurskaya of the University of Oklahoma, and Hiroshi Nikaido, Daniel Koshland, Jr., and Edward Yu of the University of California at Berkeley contributed to the research. The x-ray crystallography work was conducted at ALS beamline 8.2.2, which is funded by the Howard Hughes Medical Institute.