Exosomes, novel antigen bearers in "antitumor vaccination", yield some of their secrets 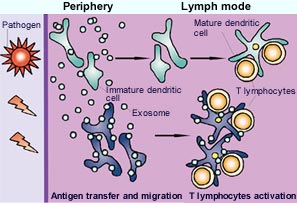 Exosomes are minute, natural membrane vesicles secreted by various types of cells of the immune system. They are of enormous interest to oncologists, who are now using them in clinical trials as tumor-antigen bearers to trigger tumor rejection by the body.

On the basis of studies in vitro and in mice, INSERM doctors and research scientists at the Institut Curie proposed a novel mode of functioning of exosomes in the December 2002 issue of Nature Immunology. It seems that exosomes can indirectly stimulate the immune system. When they are secreted by dendritic cells (the immune system’s “sentries”), they are captured by other dendritic cells, which subsequently bring about the triggering of the immune response. It is as if one of the functions of the exosomes is to transfer their specific membrane-borne antigens to other dendritic cells, thus multiplying the number of “sentries” alerted and raising the defense potential of the immune system. If this mechanism is confirmed, it would partly explain how exosomes participate in tumor rejection in vivo.

These studies will undoubtedly lead to improvements in the use of antigen-bearing exosomes in cancer immunotherapy.

At the Institut Curie, a research group (Clotilde Théry, Sebastian Amigorena) and a medical team (Livine Duban, Olivier Lantz) (1) have joined forces to study the mechanisms of action of mouse dendritic cell-derived exosomes. At their surface these exosomes present several proteins involved in the stimulation of target T-cells (including molecules of the major histocompatibility complex or MHC), as well as a specific antigen. The Institut Curie teams confirmed that T-cells bearing a surface receptor to this specific antigen are directly stimulated in vivo, thus triggering the immune response. They noted, however, a strange phenomenon: exosomes only induce the proliferation of T-cells in vitro if “mature” dendritic cells are also present.

What is the benefit of such a strategy for the organism? The authors suggest that the exosomes may be secreted into the peripheral tissues where the dendritic cells meet pathogenic agents (viruses, bacteria, tumor cells) and migrate from there towards the lymph nodes where they sensitize mature dendritic cells. The exosomes could therefore “prime” several mature dendritic cells and hence increase the number of cells presenting the antigen to the T lymphocytes (diagram p.3). For the moment, however, this remains hypothetical since the secretion of exosomes by dendritic cells in vivo has not been formally demonstrated. In contrast, exosomes (first described almost 20 years ago) are clearly secreted in vitro.

What is important is that we can induce cells to secrete exosomes in vitro, i.e. in large quantities, and then use these exosomes to elicit in vivo specific immune reactions and not generalized activation of the immune system.

Exosomes are flattened spheres, bounded by a lipid bilayer, that are secreted by the cell on the fusion of small internal compartments with the plasma membrane. They are smaller (30 to 100 nm in diameter) than other cell-secreted membrane vesicles.
The protein composition (internal or membrane) of exosomes is also characteristic and now quite well established: adhesion, transport, membrane fusion and signal transduction proteins, plus the proteins that bind and present the antigen. The precise function in the exosomes of most of these proteins remains unclear. The biological function of the exosomes themselves is also uncertain, although credible hypotheses can be built on the data accumulated in recent years.

Several types of cells seem able to secrete exosomes, particularly certain cells of the immune system (mastocytes, T and B lymphocytes, dendritic cells, platelets).
In 1996, a pioneering team observed in vitro that exosomes derived from human B lymphocytes stimulate T lymphocytes, by presenting to them a specific antigen (2).

In 1998, a collaboration between scientists at the Institut Curie and the Institut Gustave-Roussy showed that exosomes, produced in vitro by dendritic cells previously pulsed with tumor antigens, induce tumor rejection in mice (3).

One of the lines of research then focused on the use of these exosomes as a “vaccine” in the prevention of tumor recurrence caused by cancer cells that elude the effects of treatment.

After the positive findings recorded in mice, a first phase I clinical trial (to determine toxicity and effective dose in a small number of patients) was launched in France in 2000, at the Institut Curie and at the Institut Gustave-Roussy. Exosomes bearing the melanoma antigen MAGE3 were administered to patients with metastatic melanoma expressing MAGE3. No toxicity was seen, but there was a positive response in the patients receiving the highest doses: regression of skin tumors in some and reduction of lymph node metastases in others.

A second phase I clinical trial is currently under way in the United States, at Duke University. Dendritic cell-derived exosomes are being administered to patients with non-small cell lung cancer. The preliminary results show prolonged stabilization of the disease.
Another phase I trial should begin in France in 2003, using exosomes in the treatment of cancer of the neck of the womb.