Proteome of the human heart mapped for the first time 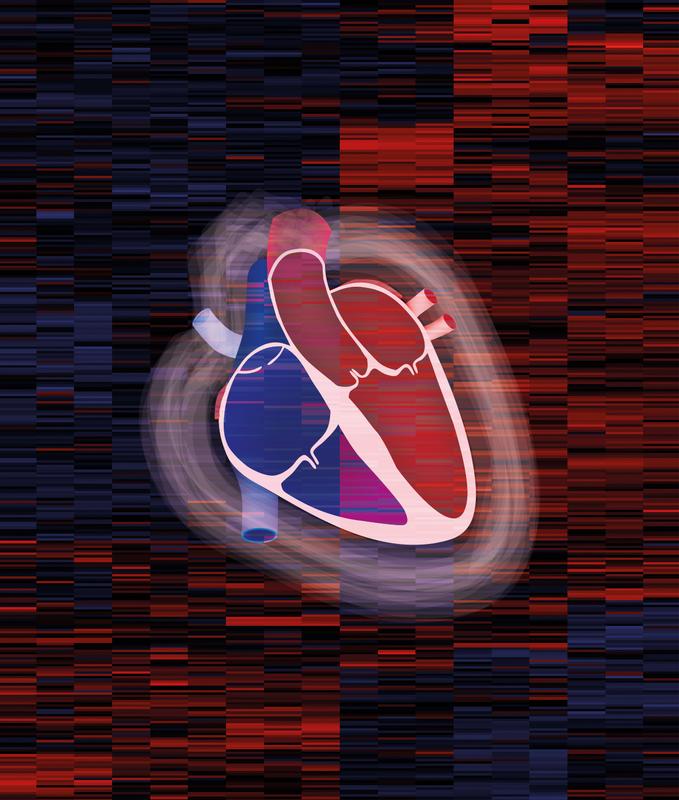 Foreground: heart schemata, background: section of a so-called heatmap, an overview of analyzed proteins that were summarized for the first time in an extensive atlas. Doll / Krause / Menzfeld © MPI of Biochemistry

Proteins are the molecular machines of cells, in which they perform a range of functions. They are produced by the cells based on blueprints stored in their DNA. Changes occurring at the DNA or protein level can lead to disorders. For such changes to be recognized as underlying causes of heart disease, it is important to know precisely which proteins are present in the healthy heart and in what quantities.

Protein map of the heart

The first such protein atlas of the heart was recently published in Nature Communications by a research team from Munich. The scientists determined the protein profile of cells in all the regions of the heart, such as heart valves, cardiac chambers and major blood vessels. In addition, they investigated the protein composition in three different cell types of the heart: the cardiac fibroblasts, the smooth muscle cells and the endothelial cells. In this way the researchers were able to map the distribution of proteins in the various regions of the heart. Using mass spectrometry, they identified nearly 11,000 different proteins throughout the heart.

Previous studies had focussed for the most part only on individual cell types, or they used tissue from diseased hearts. “This approach has two problems,” says Sophia Doll of the MPIB and lead author of the study. “First, the results did not give a full picture of the heart across all its regions and tissues; and second, comparative data on healthy hearts were often missing. Our study has eliminated both problems. Now the data can be used as a reference for future studies.”

“Looking at the protein atlas of the human heart, you can see that all healthy hearts work in a very similar manner. We measured similar protein compositions in all the regions with few differences between them,” says Sophia Doll. We were also surprised to find that the right and left halves of the heart are similar, despite having quite different functions: the right half pumps oxygen-poor blood to the lungs, while the left half pumps oxygen-rich blood from the lungs to the body.

In the next step, the team wanted to test whether the data from healthy hearts could serve as a control for detecting changes in diseased hearts. They compared their values with the cardiac proteomes of patients with atrial fibrillation, a very common rhythm disorder of the heart. The results indeed provided initial clues as to the cause of the disease. The tissue of the diseased hearts was most different in proteins responsible for supplying energy to the cells.

The comparison provided yet another interesting finding: Although the proteins involved in energy metabolism were changed in all the patients, those changes differed between individuals. “These findings show us how important personalized medicine is. Although all the patients had very similar symptoms, we see from the data that a different molecular dysfunction was responsible in each case. We need to learn to recognize and treat such individual differences − especially in cardiac medicine,” says Markus Krane, Deputy Director of the Department of Cardiovascular Surgery of the German Heart Centre Munich at the TUM.

Together with his colleagues at the Department of Cardiovascular Surgery at the German Heart Centre Munich (Director: Professor Rüdiger Lange), Markus Krane has collected more than 150 tissue samples from over 60 cardiac operations and forensic samples. Using elaborate cell culture methods, they were able to extract the various cell types from them. This large amount of cardiac material was a crucial factor for studying the individual heart regions so precisely. Professor Matthias Mann, head of the Proteomics and Signal Transduction Group at the MPIB, and his team carried out extensive mass spectrometric measurements. Thanks to advances in mass spectrometry and sample processing, the researchers are lighting the way towards personalized medicine.

The team at the MPIB attaches great importance to precise, repeatable and fast analytical methods. They have improved the measuring technique to the extent that an entire heart region can now be determined in less than two days − twice as fast as before. This is crucial, especially for potential use on patients.

The data will be soon available in the public database MaxQB (maxqb.biochem.mpg.de).

About the Technical University of Munich
The Technical University of Munich (TUM) is one of Europe's leading research universities, with more than 550 professors, 41,000 students, and 10,000 academic and non-academic staff. Its focus areas are the engineering sciences, natural sciences, life sciences and medicine, combined with economic and social sciences. TUM acts as an entrepreneurial university that promotes talents and creates value for society. In that it profits from having strong partners in science and industry. It is represented worldwide with the TUM Asia campus in Singapore as well as offices in Beijing, Brussels, Cairo, Mumbai, San Francisco, and São Paulo. Nobel Prize winners and inventors such as Rudolf Diesel, Carl von Linde, and Rudolf Mößbauer have done research at TUM. In 2006 and 2012 it won recognition as a German “Excellence University.” In international rankings, TUM regularly places among the best universities in Germany.