Plant viruses may be reshaping our world 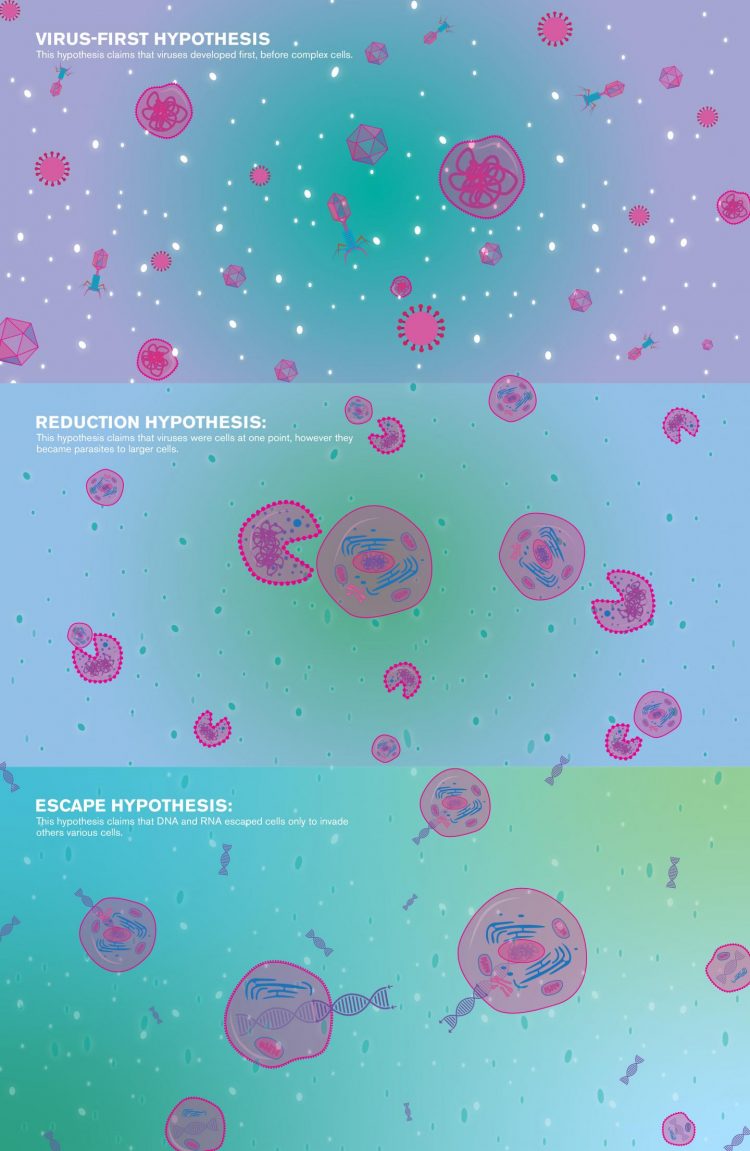 Mysteries abound in the viral world. Scientists still aren't quite sure where they came from. The illustration describes three leading theories. According to the virus-first hypothesis, RNA molecules capable of enzymatic activity and self-replication preceded cellular forms at the dawn of life. According to the reduction hypothesis, viruses came from small primordial cells that lost their cellular elements in the course of evolution, while retaining their genetic material and the machinery required for replication. According to the escape hypothesis, viruses arose from cellular RNA or/and DNA fragments such as plasmids and transpozons. During cell fission, a smaller cell-like entity may have formed, engulfing a self replicating RNA fragment and a coat encoding RNA segment, forming a virus. Credit: Shireen Dooling

Viruses are justly feared as ingenious pathogens, causing diseases in everything they invade, including virtually all bacteria, fungi, plants and animals.

Recent advances in the field of virology, however, suggest that viruses play a more significant and complex role than previously appreciated, and may be essential to the functioning of diverse ecosystems.

We now know that humans contain roughly 100,000 pieces of viral DNA elements, which make up around 8 percent of our genome. Speculation on the role of these ancient viral fragments ranges from protection against disease to increasing the risk of cancer or other serious illnesses, though researchers acknowledge they have barely scratched the surface of this enigma.

A new review article appearing in the journal Nature Reviews Microbiology highlights the evolution and ecology of plant viruses. Arvind Varsani, a researcher at ASU's Biodesign Institute joins an international team to explore many details of viral dynamics.

They describe the subtle interplay between three components of the viral infection process, the virus itself, the plant cell hosts infected by the virus and the vectors that act as go-betweens–an intricate system evolving over some 450 million years. All three elements are embedded within wider relations of the surrounding ecosystem.

Recent studies in the field of virology have shown that viruses are sometimes beneficial to the organisms they infect. “Prior to this people have always seen viruses as disease-causing entities,” Varsani says. “This breaks all the dogmas of how we study viruses. We have a section where we review mutualism and symbiosis and also how some of the symbiotic relationships are being uncoupled.”

In 1892, Dmitry Ivanovsky, a Russian botanist, conducted a simple experiment that would have momentous implications for science and medicine. He collected sap from a diseased tobacco plant, fed the substance through very fine pores and showed that this filtered fluid could infect a healthy tobacco plant. The filtering ensured that whatever the disease-causing entity was, it was tinier than a bacterium. A Dutch plant specialist and microbiologist Martinus Beijerinck dubbed the mysterious pathogenic substance a virus, though its true form–invisible to light microscopy– only appeared in 1931, with the invention of the electron microscope. A rod-shaped plant invader, known as tobacco mosaic virus, had revealed itself–the first virus on record. Since this time, thousands of distinct species have been identified, yet they represent a tiny fraction of the viral universe, most of which remains unexplored.

Indeed, even the question of what constitutes a virus has no single answer. Their sizes vary enormously, from a virus like Ebola, carrying a tiny handful of genes, to recently discovered giant viruses. Rivalling some bacteria in size, giant viruses can carry elements of the machinery required for translation, throwing their status as non-living entities into question.

“The way I look at viruses now is from a philosophical angle,” Varsani says. “They are a dynamic entity and they have multiple lifestyles, ranging from basic, where the virus is fully reliant on the host for replication, to some cases where it's only partly reliant on the host.” Because some viruses can evolve so rapidly, trading and acquiring new genetic elements, their genomes can become chimeric or even fragmented, making their proper classification a serious challenge for the field of virology.

From the standpoint of ecology, plant viruses are particularly important for a number of reasons. Plants make up over 80 percent of the biomass on earth, exerting a greater impact on the planet's diverse ecosystems than viruses infecting other kingdoms of life. Plant viruses have obvious importance for food crops and ornamental plants, and a range of viruses are responsible for an estimated $60 billion in crop losses worldwide each year.

To capture the astonishing richness of the planet's viral universe, researchers have gone beyond early methods of pinpointing individual virus particles and analyzing them. Techniques of metaviromics are used to probe environments for the full panoply of viruses they contain. The method, which relies on piecing together multiple DNA or RNA genomes from environmental samples, has been recently used to identify vast numbers of previously undocumented viruses. In the case of plant viruses, these viral fragments are often extracted from the insect vectors that ferry the viruses from plant to plant.

Metaviromic sequencing is a particularly powerful technique for investigating viral communities. Unlike cellular life, which has a single, common origin, viruses are polyphyletic, meaning that they are the result of multiple origins. No single gene has been identified that is shared by all viruses. While common protein motifs have been observed in viral capsids, these are likely the result of convergent evolution or horizontal gene transfer, rather than inherited elements.

The strategy of metaviromics is particularly useful for teasing out mutualistic relationships between plants, vectors and viruses and their changing relationships over time. As so much research since the inception of virology has been focused on viruses as disease-causing agents in humans and plants, the nature and degree of mutualistic interactions between viruses, vectors and hosts is most likely underrepresented.

The authors speculate that viruses may play an important role in maintaining biodiversity and helping plants adapt to their environment by limiting the growth of genetically homogeneous plants, including crops. New studies of viral ecology seek to understand the extent and importance of both pathogenic and mutualistic interactions. An all-important link in the chain of infection is the behavior of particular insect vectors and their modes of viral transmission, though numerous other factors come into play, including nutrients, water resources, heat and cold stress, and adverse soil conditions.

Vectors play an outsized role in the world of plant viruses. Unlike animal viruses, plant viruses are not usually transmitted through direct contact between infected and uninfected individuals. Instead, plant viruses disseminate through vectors, (especially insects) as well as through pollen and seeds.

It is believed that the mode of viral transmission plays a role in the virus' effect on its host. If the virus is transmitted via seeds or pollen, the virus should limit its harmful effect on the reproductive success of the host plant, perhaps even conveying an adaptive advantage over uninfected plants.

The viral passage from parent to daughter plant is known as vertical transmission. By contrast, horizontal viral transmission occurs when insect vectors transit the virus from plant to plant. Such vector-borne assaults can be more merciless to the infected plant and only need ensure their continued spread to a suitable number of healthy plants for the virus to be successful.

Many kinds of vectors can transmit plant viruses, including arachnids, fungi, nematodes, and some protists, though more than 70 percent of known plant viruses are transmitted by insects, most from the biological order Hemiptera, which includes cicadas, aphids, planthoppers, leafhoppers and shield bugs.

Insects of this kind can make use of mouthparts constructed for piercing and extracting sap or plant cell material. Insect transmission of plant viruses can occur through excretion of virus particles in saliva following feeding on an infected plant. Alternately, the plant virus can become permanently incorporated into the insect's salivary glands, allowing the vector to transmit the virus to new plants throughout the insect's lifetime.

In addition to their complex and varied chains of infection, some plant viruses have another unique property. Such viruses transmit their genomes in multiple packets, each containing only part of the virus' complete genetic code, encapsulated in a separate virus particle. This peculiar strategy, which requires the co-transmission of several viral particles to a new host in order to ensure the integrity of the viral genome, is a feature believed to be unique to plant viruses. The nature and evolution of these so-called multipartite viruses remains a biological puzzle.

Plant viruses display considerable ingenuity in their strategies, which are highly dependent on their given environment. Some are generalists, invading multiple species, while other viruses are specialists that favour a narrow range of plant hosts. This selectivity may develop with time, through a process known as adaptive radiation. This typically occurs when a virus faces a heterogeneous habitat and becomes adaptively specialized to exploit particular ecological resources while becoming maladapted to exploit others. Such specialization acts to limit competition between different viral lineages or species. Alternatively, generalist viruses infect multiple plant hosts but must compete for these resources with other viruses. This situation tends to result in a viral population of low diversity dominated by the most acutely adapted viral genotypes.

The arrival of viruses

While researchers agree that viruses lack a single common ancestor, a detailed picture of how (and when) they emerged in the web of life remains deeply contested. Three common hypotheses compete for dominance as an explanatory framework, though they are not mutually exclusive. Perhaps viruses evolved from free-living cells, as the devolution or regressive hypothesis states. They could also have originated from RNA and DNA molecules that somehow escaped from living cells. Alternatively, viruses may have once existed as self-replicating entities that evolved alongside cells, eventually losing their independent status.

Ongoing metaviromic research of viral diversity is helping to uncover foundational relationships among viruses and pinpoint common origins among many plant, fungal and arthropod viruses. Of particular concern for the future are the ways in which human-caused disruptions to ecosystems across the planet, which are occurring at rates unprecedented in earth's history, are reforming virus, vector and host relationships.

The effects of these disruptions may be to foster emergent viruses with heightened abilities to cause disease in their hosts. As ecological communities become more tightly interwoven through changes in human land use, existing interaction networks that have acted over evolutionary time to stabilize host relations with native vectors and viruses can suddenly shift. Any lethal entity entering this kind of disrupted ecosystem is much likelier to rapidly spread through the population and aggressively sweep through different organisms. The future health and sustainability of both human and plant populations will benefit from an improved understanding of the many subtle interrelationships governing the most ubiquitous viruses–those colonizing plants.