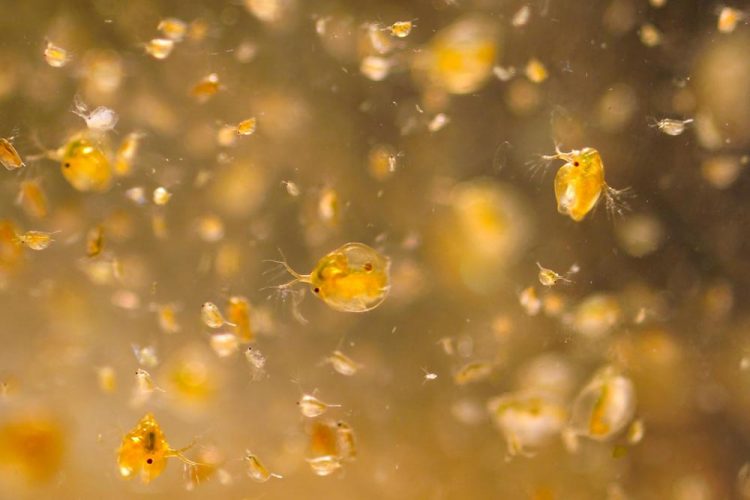 Pesticides can have negative effects on sensitive individuals even in the lowest concentrations. This is exemplary shown by experiments with crustacean Daphnia magna. Credit: ©André Künzelmann / UFZ

Toxic substances such as pesticides can cause effects on sensitive individuals in concentrations up to ten thousand times lower than previously assumed. This was shown by Researchers at the UFZ in their latest study published in Scientific Reports.

For understanding these results, one must consider that the level of stress plays an important role. Most surprisingly: not only too much, but also too little stress can lead to a higher sensitivity to toxicants!

Whether a toxicant harms or kills an organism, and if so to which extent, depends on its concentration and the sensitivity of the individuals exposed: the dose makes the poison. “But that's not all,” says UFZ ecotoxicologist Prof. Dr. Matthias Liess. „Also, the magnitude of environmental stress is very important to determine the effect of a toxicant.”

Toxicant concentration, individual sensitivity and environmental stress thus interact in a triad of effects. In their current study, the researchers have investigated the role of these individual components. They wanted to find out how sensitive individuals can be better protected by risk assessment.

“Previous model calculations could not sufficiently predict the effects of low toxicant concentrations on sensitive individuals and species,” explains Liess. “But this is very important in both human and ecotoxicological risk assessment”. This is because sensitive persons – such as children, sick or elderly people – or more sensitive species of an ecosystem obviously suffer damage even at much lower concentrations than previously assumed.

Our extensive investigation was triggered by an observation: “At very low pesticide concentrations – far below concentrations that led to effects in previous studies – effects on sensitive organisms were observed,” says the ecotoxicologist. These effects have hardly been observed since such low concentrations are very rarely tested.

Also, in their own investigations in which they exposed the crustacean Daphnia magna to very low concentrations of the pesticide esfenvalerate (is used as an insecticide with contact and feeding action in plant protection products in fruit, vegetable and arable farming and is approved in the EU).

The question that arises is: which process can induce effects in these low concentration ranges? The hypothesis of the UFZ scientists is that toxicant stress meets internal stress. But what does that mean?

“We were already able to quantify this relationship in earlier studies,” says Liess. “Additionally, we are now able to show that individuals develop internal stress when they are exposed to too little stress from the environment. In fact, it seems like organisms are adapted to a certain degree of “external” stress. If it is missing, they develop “internal” stress.

“And since external and internal stress add up, the sensitivity to toxicants increases drastically,” explains Liess. The result: Sensitive individuals already react to extremely low concentrations of toxicants. These can be up to 10,000 times lower than the concentrations previously considered harmful so far.

“Thus, too much – but also too little – stress increases sensitivity to pollutants,” says the UFZ researcher. “Optimal with regard to resilience against toxicant exposure would therefore be some fluctuating environmental stress, which reduces internal stress.

In order to make effects visible at low concentrations, the scientists developed a model that enables a calculation of the internal stress and the resulting survival. Liess: “We hope that our study will contribute to a more realistic environmental and human risk assessment – especially for sensitive individuals”.

The model of the UFZ researchers can be used in generally accessible and free software: http://www.systemecology.eu/indicate/