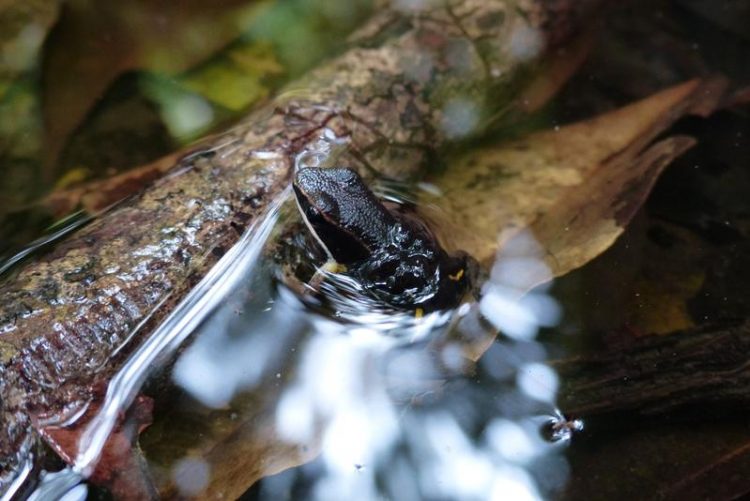 Successful reproduction not only includes mating success but also effective care of one own’s offspring for many animal species. Such brood care can demand a lot of animal parents in terms of time and energy consumption, especially if they use different places for mating, laying eggs and rearing. These costs may be reduced by a flexible decision-making strategy.

Which decision rules parents apply and how flexible they can adjust these strategies according to changes in their environment seems to depend on the habitat. Research attributes a high degree of flexibility and adaptability to animals in rather dynamic habitats, whereas stereotypical behaviour is expected to occur in animals that occupy less dynamic environments.

Eva Ringler from the Messerli Research Institute of Vetmeduni Vienna and her colleagues from the University of California Los Angeles and the University of Vienna have now investigated the breeding care behaviour of the South American rainforest poison frog Allobates femoralis.

The study focused on males who in this species are responsible for transporting tadpoles from terrestrial clutches to suitable pools. The analysis of water bodies the frogs chose for depositing their offspring reflected a hierarchical decision-making process. However, this process was adapted flexibly to balance between offspring survival and male transporting efforts.

Observation from nursery to adulthood

Rainforests represent a highly variable environment for their animal inhabitants. In order to investigate the tadpole deposition strategies of individual frogs, the research team introduced 1800 tadpoles across twenty artificial water bodes on a river island in the rainforest French Guyana, which was previously not occupied by this frog species.

“By repeatedly sampling and comparing the genotypes of all individuals, we were able to track each individual throughout their development, from the tadpole to the adult frog. This enabled us to investigate specific decision patterns for an entire population in the wild, and even could reconstruct the own natal pools for all adult individuals. This knowledge also allowed us to investigate how the frogs react when certain water points suddenly disappeared,” explains first author Ringler.

The researchers investigated changes in deposition preferences by removing half of the artificial water pools before the beginning of the following breeding period. It turned out that the male poison frogs, which often have to care for several clutches at the same time, only prefer their own natal ponds at the beginning of the breeding season, but quickly switch to more optimal options if possible.

Even those males who no longer had their breeding pool available tended to move towards their own home waters when transporting their own tadpoles, but likewise changed their mind quickly. “These frogs are very good at memorizing their habitat. But, this does not mean that they always rely on the “old and familiar”. The high dynamics in tropical habitats likely selected for animals reacting highly flexibly to changes in the environment. Being able to assess the quality of the water body in which tadpoles are placed, is a highly important ability in poison frog parents,” says Ringler.

Especially the presence of dragonfly larvae, the main predators of the tadpoles, influenced the selection of water pools by parent frogs. Male poison frogs are able to detect this danger. “They make a decision to avoid certain water pools, even if originally preferred,” explains Ringler. If these predators occupied a certain pool, it was largely avoided as a deposition location by male frogs. However, a small number of dragonfly larvae were tolerated by the males when in turn water bodies were located very close to their territories.

This indicates another important decision factor in the selection of suitable pools: spatial proximity. “These frogs show a very pronounced territorial behaviour. They defend their area, in which the eggs are laid, vehemently against other males. If the transport of the tadpoles demands too much time, the risk of territory takeover by another male increases – and so does the risk of losing other remaining clutches, since takeover males tend to cannibalize the clutches of the previous territory owner. Nevertheless, the males will cover longer distances if they can avoid water bodies with predators,” says the first author. But as movement over long distances will increase the visibility and thus the predation risk of transporting adults, for their own protection, they will reduce this risk as much as possible.

The last parameter analysed by the researchers was whether certain water pools are used by multiple male frogs. It turned out that exclusivity is not a factor for deposition preference. Instead, the number of tadpoles already deposited in a water body seemingly highlighted its quality. Many tadpoles reflect low number of predators and high stability of a given pool. Overall, the results of Ringler and her team show that the small frogs on the one hand follow a hierarchical decision pattern, but on the other hand can flexibly adapt to changing conditions in their habitat. A very good local memory and the identification of possible dangers for their offspring supports the decision strategies employed by male frog parents.

About the University of Veterinary Medicine, Vienna
The University of Veterinary Medicine, Vienna in Austria is one of the leading academic and research institutions in the field of Veterinary Sciences in Europe. About 1,300 employees and 2,300 students work on the campus in the north of Vienna which also houses five university clinics and various research sites. Outside of Vienna the university operates Teaching and Research Farms. The Vetmeduni Vienna plays in the global top league: in 2017, it occupies the excellent place 8 in the world-wide Shanghai University veterinary in the subject “Veterinary Science”. http://www.vetmeduni.ac.at

About Messerli Research Institute
The Messerli Research Institute was founded in 2010 with support from the Messerli Foundation (Sörenberg, Switzerland) under the management of the University of Veterinary Medicine, Vienna in cooperation with the Medical University of Vienna and the University of Vienna. The research is devoted to the interaction between humans and animals, as well as its theoretical principles in animal cognition and behavior, comparative medicine and ethics. Its work is characterized by its broad interdisciplinary approach (biology, human medicine, veterinary medicine, philosophy, psychology, law) and strong international focus. http://www.vetmeduni.ac.at/en/messerli/