New wasp species with a giant stinger discovered in Amazonia 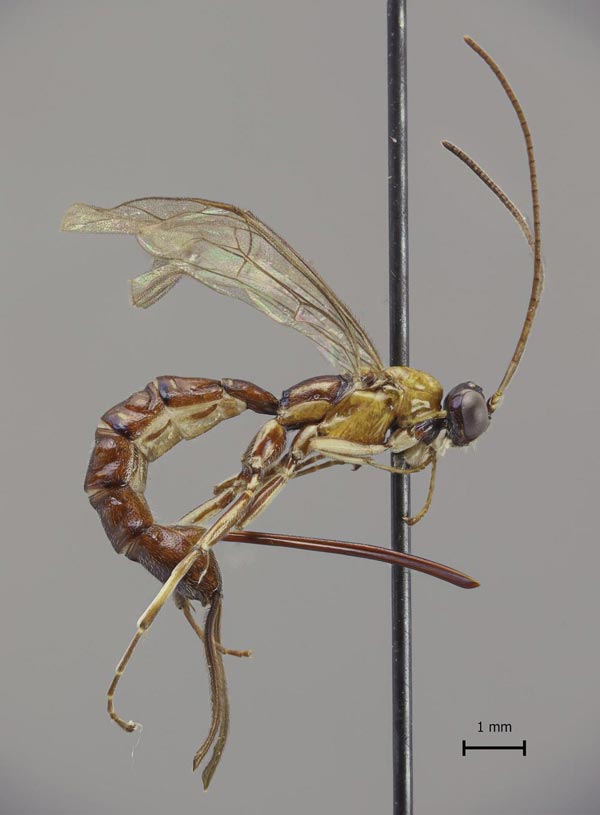 A new wasp species unknown to science differs from other parasitoid wasps due to its massive stinger. The new species named Clistopyga crassicaudata was discovered in the western Amazonia. Credit: Kari Kaunisto

Researchers from the Biodiversity Unit of the University of Turku, Finland, have in the recent years found and described several new animal species from all over the world – especially from Amazonia. Many of these animals are unusual in their characteristics and habits. In their latest study, the scientists, in collaboration with colleagues from Colombia, Spain and Venezuela, discovered several wasp species unknown to science from the Amazon which were described and named in the latest issue of the Zootaxa journal.

– The stinger of the new parasitoid wasp called Clistopyga crassicaudata is not only long but also very wide, in comparison with the size of the species. I have studied tropical parasitoid wasps for a long time but I have never seen anything like it. The stinger looks like a fierce weapon, says Professor in Biodiversity Research Ilari E. Sääksjärvi from the University of Turku.

The species was discovered among the insect specimens collected in the extremely diverse transitional zone between the Andes and the Amazonian lowland rainforest. The newly described wasp is different to other known species due to its enormous stinger.

– All female wasps, such as bees and hornets, have a stinger for injecting venom or laying eggs. The parasitoid wasps usually have a long ovipositor for laying eggs which is handy for reaching the host animals living inside a tree, for instance. With the ovipositor, the egg is placed either on or inside the host, and, as it also works as a stinger, the female wasp can inject venom into host in order to paralyse it, explains Professor Sääksjärvi.

The newly described parasitoid species belong to the rare Clistopyga genus that specialises in laying their eggs into spiders or spider egg-sacs. The wasps seek out spiders living in nests and paralyse them with a quick venom injection. Then the female wasp lays its eggs on the spider and the hatching larva eats the paralysed spider as well as the possible spider eggs or hatchlings.

– We do not know for sure which spider this wasp species prefers. A couple of years ago I described the elaborate and fascinating habits of the Clistopyga parasitoid wasp together with Doctoral Candidate Niclas Fritzén from the Biodiversity Unit of the University of Turku. The insect we were studying at the time could use its stinger as an intricate felting needle and handily close the spider's web nest trapping the paralysed inhabitant within. The giant stinger of the current species is very likely a highly sophisticated tool as well, but unfortunately we can only guess at its purpose, says Professor Sääksjärvi.

The research group of the Biodiversity Unit is currently applying for funding for new field studies, the purpose of which is to look for more Clistopyga parasitoid wasps in the rainforests of western Amazon. The goal is to describe the habits of the peculiar wasp species and to decipher their evolutionary history.