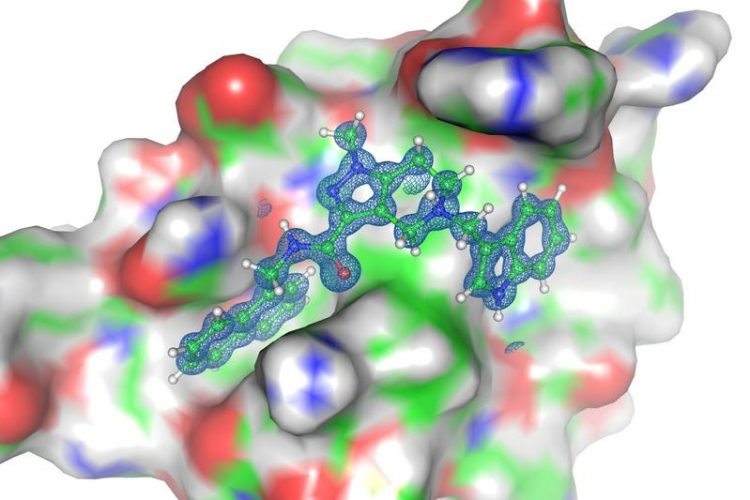 Trypanosomes get their name from the Greek trypano- (borer) and soma (body). The protozoan parasites are responsible for various diseases, particularly in Latin America and Africa. The best known example is probably sleeping sickness, which is caused by trypanosomes and transmitted by tsetse flies. In the end stage, patients suffer from uncontrollable sleep, which gave the sickness its name.*

“Until now, there have been only a few medications against trypanosomes. These drugs have many undesirable side effects, and first cases of resistance are already spreading,” explains Prof. Dr. Michael Sattler, Director of the Institute of Structural Biology at the Helmholtz Zentrum München and Professor of Biomolecular NMR Spectroscopy at the Technical University of Munich.

Together with Dr. Grzegorz Popowicz (also Helmholtz Zentrum München) and the group headed by Prof. Dr. Ralf Erdmann at Ruhr University Bochum, the research team sought new possibilities to deactivate the pathogen. “We primarily concentrated on the so-called PEX proteins, which have been under debate as potential targets for pharmacological interference for some time,” says Sattler.

PEX proteins are the key

The PEX proteins play a crucial role in the function of the so-called glycosomes. These are small cell organelles that are important to maintain the parasite’s sugar metabolism. “The idea was to prevent the interaction between two essential proteins, PEX14 and PEX5, and consequently to disrupt the trypanosome metabolism so effectively that the parasites cannot survive,” explains Grzegorz Popowicz. At the Bavarian NMR Center, a joint research infrastructure of the Helmholtz Zentrum and TU München, the researchers therefore first used nuclear magnetic resonance (NMR) to investigate the structure of the two target proteins.

In the next step, the teams from Munich and Bochum used the thus determined spatial structure to optimize a substance that specifically binds to PEX14, thereby preventing the interaction with PEX5, which eventually kills the parasite. Grzegorz Popowicz describes it as, “We more or less first measured the lock and then developed the right key for it.”

Possibly also relevant for other parasites

In the future, the researchers want to further advance these molecules using medicinal chemistry so that they can be tested in clinical studies and, eventually may be approved as drugs. They are also examining the extent to which the approach is suitable to kill other single-cell parasites that may depend on similar proteins. “One possibility would be to target the Leishmania parasite,” explains Popowicz. Future research in this direction will follow.

* A further example is the so-called Chagas disease, which is caused by Trypanosoma cruzi and transmitted by so-called kissing bugs (Triatominae). Around eight million people are estimated to be affected in North and South America. Symptoms include heart problems, as well as nerve damage in the digestive tract. In the current study, Trypanosoma cruzi was examined as a representative.

Background:
The research team used the NMR Fragment Screening Platform at Helmholtz Zentrum Munich, as part of the Bavarian NMR Center. First, they examined the spatial structure of the PEX proteins. A computational in silico screening procedure then identified the possible binding hits, and the team was able to validate these using NMR experiments in the further course of the project. Together with the colleagues from Bochum, one of the candidates was then optimized with the help of high-resolution crystal structures.

The Institute for Structural Biology (STB) investigates the spatial structures of biological macromolecules, their molecular interactions and dynamics using integrated structural biology by combining X-ray crystallography, NMR-spectroscopy and other methods. Researchers at STB also develop NMR spectroscopy methods for these studies. The goal is to unravel the structural and molecular mechanisms underlying biological function and their impairment in disease. The structural information is used for the rational design and development of small molecular inhibitors in combination with chemical biology approaches. http://www.helmholtz-muenchen.de/stb

Technical University of Munich (TUM) is one of Europe’s leading research universities, with more than 500 professors, around 10,000 academic and non-academic staff, and 40,000 students. Its focus areas are the engineering sciences, natural sciences, life sciences and medicine, com-bined with economic and social sciences. TUM acts as an entrepreneurial university that promotes talents and creates value for society. In that it profits from having strong partners in science and industry. It is represented worldwide with a campus in Singapore as well as offices in Beijing, Brussels, Cairo, Mumbai, San Francisco, and São Paulo. Nobel Prize winners and inventors such as Rudolf Diesel, Carl von Linde, and Rudolf Mößbauer have done research at TUM. In 2006 and 2012 it won recognition as a German “Excellence University.” In international rankings, TUM regularly places among the best universities in Germany. http://www.tum.de/en/homepage