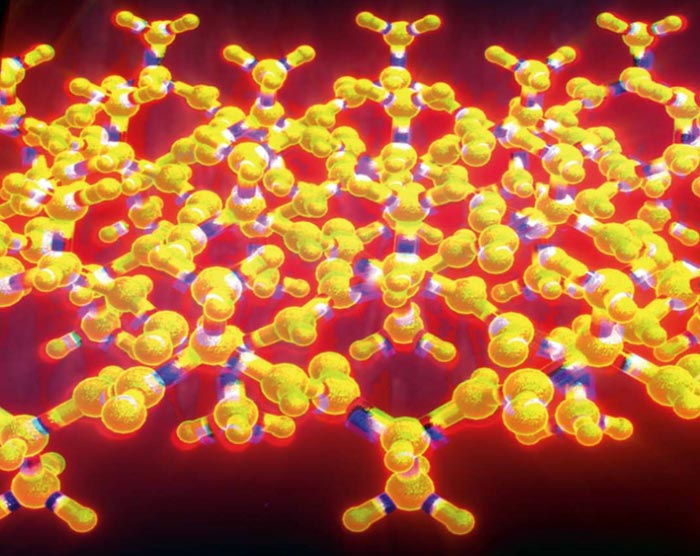 The rippled beta sheet is a variation on the pleated beta sheet, a well-known structural motif found in thousands of proteins. Linus Pauling and Robert Corey described the rippled beta sheet in 1953, but it remained a largely theoretical structure for decades. Scientists have now created rippled sheets in the laboratory and characterized the structure using x-ray crystallography.
Image credit: J. Raskatov

An unusual protein structure known as a “rippled beta sheet,” first predicted in 1953, has now been created in the laboratory and characterized in detail using x-ray crystallography.

The new findings, published in July in Chemical Science, may enable the rational design of unique materials based on the rippled sheet architecture.

“Our study establishes the rippled beta sheet layer configuration as a motif with general features and opens the road to structure-based design of unique molecular architectures, with potential for materials development and biomedical applications,” said Jevgenij Raskatov, associate professor of chemistry and biochemistry at UC Santa Cruz and corresponding author of the paper.

Proteins come in an enormous range of shapes and sizes to carry out their myriad structural and functional roles in living cells. Certain common structural motifs, such as the alpha helix, are found in many protein structures.

In a previous study published in 2021, Raskatov’s team reported obtaining a rippled beta sheet structure by mixing a small peptide with equal amounts of its mirror image. The researchers used mirror-image forms of triphenylalanine, a short peptide consisting of three phenylalanine amino acids. The mirror-image peptides joined in pairs to form “dimers” with the predicted structure, but they did not form the extended, periodic rippled beta-sheet layer topography hypothesized by Pauling and Corey.

“The dimers packed together into herringbone layer structures, which raised doubt as to whether the periodic rippled beta-sheet layer configuration was viable,” Raskatov said.

In the new study, the researchers substituted other amino acids for one of the triphenylalanines to create slightly different tripeptides and their mirror-images. Using these new tripeptides, they were able to create three different aggregating peptide systems that formed extended antiparallel rippled beta sheet layers, in which mirror-image peptide strands were arranged in alternating fashion. The results of x-ray crystallography showed that the crystal structures are in excellent overall agreement with the predictions made by Pauling and Corey.

The co-first authors of the paper are Amaruka Hazari, a staff scientist in Raskatov’s lab, and Michael Sawaya at UCLA. Other coauthors include Timothy Johnstone at UC Santa Cruz and Niko Vlahakis, David Boyer, Jose Rodriguez, and David Eisenberg at UCLA. This work was supported by the National Institutes of Health.