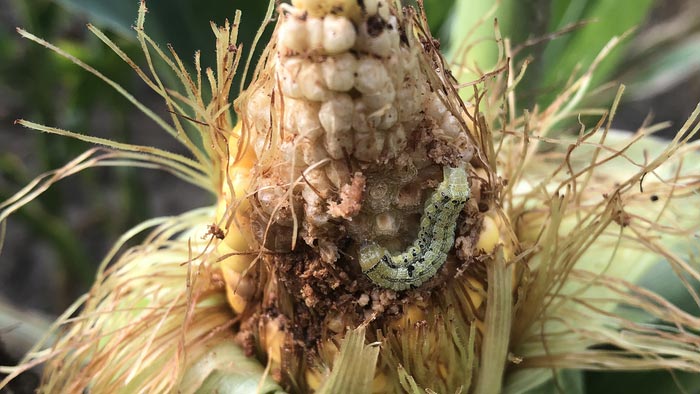 Soil temperature can be used to predict the spread of the corn earworm.
Credit: Anders Huseth, NC State University

A new study from North Carolina State University shows soil temperature can be used to effectively monitor and predict the spread of the corn earworm (Helicoverpa zea), an important pest that ravages corn, cotton, soybeans, peppers, tomatoes and other vegetable crops. The ability to better monitor the pest and make predictions about where it will appear could help farmers control the pest more effectively, which would reduce the financial and environmental impacts of pesticide use.

The researchers combined historical soil temperature data with long-term corn earworm monitoring data and information on how the pest survives cold conditions in a lab setting to better understand “overwintering success,” or how well the pest can survive underground during the colder winter months.

“There is a preconceived notion that pests have little overwintering success north of 40 degrees latitude,” said Douglas Lawton, a former NC State postdoctoral researcher and co-corresponding author of a paper that describes the research, published in Proceedings of the National Academy of Sciences. “That may have been true in the 1930s, but now we have more data-guided evidence to ask and answer the question, ‘Where can this species actually overwinter?’”

The research shows that 40 degrees latitude is not the best division for overwintering success, so much so that the researchers devised their own maps – overlaying the three different data sets – to show three relevant geographic zones: a “Southern Range” where pests survive over the winter months, a “Northern Limits” area where pests are generally unable to survive during winter months, and a “Transitional Zone” in between the northern and southern areas where pests may or may not survive over the winter.

“These areas are biologically relevant and supported through studies in the lab and the academic literature,” Lawton said.

The researchers used the three zones to show historical trends for the corn earworm and then used a model to make predictions about pest spread extending to the end of the century. Strikingly, the Southern Range grew by 3% since 1981. The models suggest the Southern Range will double in size by the end of the century and shift well to the north, with the other two zones shrinking.

“As the climate changes, the overwintering zones are likely to shift northward,” said Anders Huseth, assistant professor of entomology at NC State and the paper’s other co-corresponding author.

Minnesota, with its harsh winters, saw no corn earworm overwintering success from 1950 through 2021, the data show. By the end of the century, however, the predictive models show the entire state firmly in the Transitional Zone.

“This is the canary in the coal mine for agricultural pests,” Huseth said. “Making sense of what’s taking place with this pest is really important for agricultural producers. We’ve shown here the element of uncertainty that can have demonstrable effects on farmers and potentially new opportunities for pesticide resistance selection. Our models visualize that change and provide touchstones for pest management.

“Now we’d like to come up with a better forecasting tool for this pest, along with a risk-prediction model, in order to give growers better information about pest spread. Success here could reduce both costs for farmers and pesticide into the environment.”

Note to editors: An abstract of the paper follows.

“Pest population dynamics are related to a continental overwintering gradient”

Abstract: Overwintering success is an important determinant of arthropod populations that must be considered as climate change continues to influence the spatiotemporal population dynamics of agricultural pests. Using a long-term monitoring database and biologically relevant overwintering zones, we modeled the annual and seasonal population dynamics of a common pest, Helicoverpa zea (Boddie), based on three overwintering suitability zones throughout North America using four decades of soil temperatures: Southern Range (able to persist through winter), Transitional Zone (uncertain overwintering survivorship), and Northern Limits (unable to survive winter). Our model indicates H. zea population dynamics are hierarchically structured with continental level effects that are partitioned into three geographic zones. Seasonal populations were initially detected in the Southern Range where they experienced multiple large population peaks. All three zones experienced a final peak between late July (Southern Range) and mid-August to mid-September (Transitional Zone and Northern Limits). The Southern Range expanded by 3% since 1981 and is projected to increase two-fold increase by 2099 but the area of other zones are expected to decrease in the future. These changes suggest larger populations may persist at higher latitudes in the future due to reduced low temperature lethal events during winter. Because H. zea is a highly migratory pest, predicting when populations accumulate in one region can inform synchronous or lagged population development in other regions. We show the value of combining long-term datasets, remotely sensed data, and laboratory findings to inform forecasting of insect pests.