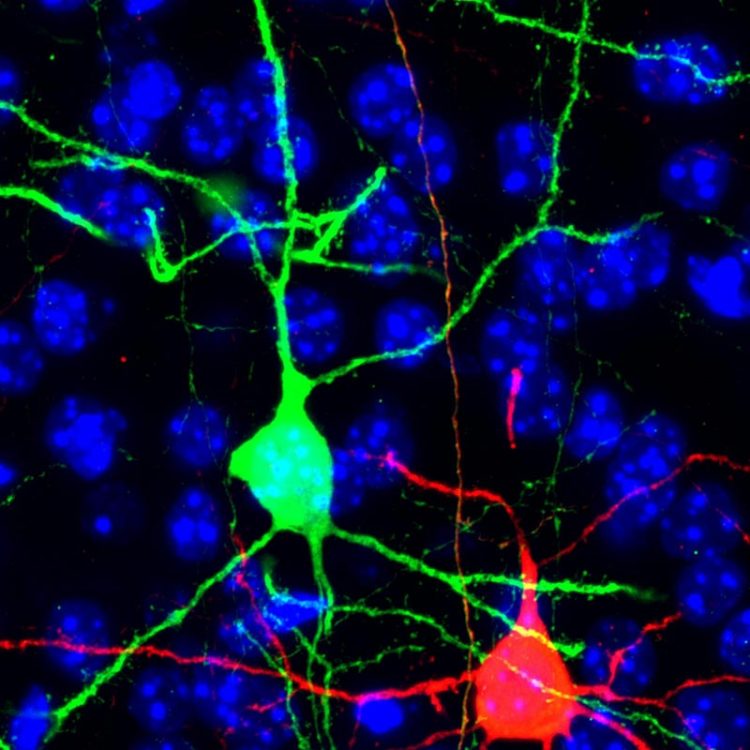 With the MADM technique, researchers can remove a gene from single cells and visualize what happens to these cells. Credit: © IST Austria - Hippenmeyer group

The gene Cdkn1c could have been considered an open-and-shut case: Mice in which the gene is removed are larger and have bigger brains, so Cdkn1c should function to inhibit growth. This rationale has led to Cdkn1c being studied as a tumour suppressor gene.

New research from the group of Simon Hippenmeyer, professor at the Institute of Science and Technology Austria (IST Austria), has now uncovered a novel, opposite role for Cdkn1c. When Cdkn1c is removed only in certain cells of the brain, these cells die, arguing for a new growth promoting role of Cdkn1c. The new research is published today in the journal Nature Communications.

Contrary to what had previously been thought, the cortex was smaller, not bigger, than in animals with a normal amount of Cdkn1c. To make sense of this seeming paradox, the researchers compared the effect of Cdkn1c loss in the whole animal with a loss of the gene in just a single tissue or even in single cells in the developing mouse.

Using a genetic technique called Mosaic Analysis with Double Markers (MADM) allowed the researchers to knockout a gene of interest in single cells and at the same time, visualize the effect of gene deletion on these cells under the microscope.

When they removed the gene Cdkn1c in cells in the whole cortex, the cortex was smaller. “When we take out the gene, cells die. In fact, we see massive death by apoptosis”, Hippenmeyer explains.

Intriguingly, it does not matter whether the DNA, the “instruction manual” in our cells that defines how products like proteins are made, is active and thus allows generation of proteins, or not. Just having two copies of the intact DNA, the intact instruction manual, is enough to protect a cell from death.

Implications for studies on brain malformations and tumour development

Systemic effects may mask the effect observed in individual cells. It is important to also study this in human conditions that lead to malformations of the brain, such as microcephaly.”

As Cdkn1c and its role in the development of tumours has been studied extensively, the new research likely also has important implications for this field, says Florian Pauler. “There has been interest in Cdkn1c as it has been regarded as a tumour suppressor.

Like the single cells and individual tissue we studied, tumours can also be seen as non-systemic. So, our findings change the way we should think about Cdkn1c, also in tumours.”

In the future, Hippenmeyer and his research group will continue to explore the mechanisms and functions of Cdkn1c. “When this piece of DNA is missing, something fundamental is changed and death is triggered in a cell. Of course, we want to now know why and how this happens”, Hippenmeyer asserts.

TACC supercomputers help scientists probe vortices and turbulence. The subject of vortices might seem esoteric. But their impact does make headlines, as seen recently in an outbreak of tornadoes, swirling…