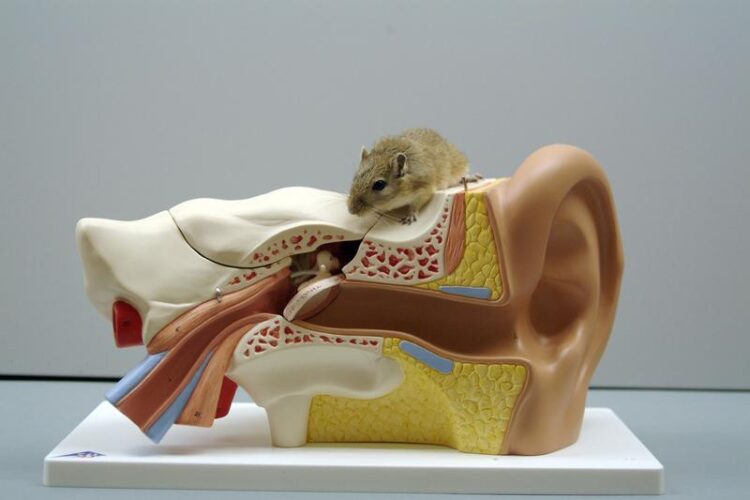 Due to its hearing similar to that of humans, the Mongolian gerbil (Meriones unguiculatus) is an important animal model in hearing research
Credit: Eike Budinger / LIN

Our brain consists of a right and a left hemisphere. Both hemispheres have different tasks and functions in perceiving and learning. In a recent study with Mongolian gerbils, researchers at the Leibniz Institute for Neurobiology (LIN) Magdeburg, the German Primate Center (DPZ) in Göttingen and Otto von Guericke University (OVGU) Magdeburg have shown how both hemispheres of the brain work together when learning acoustic stimuli. The findings, published in the Journal of Neuroscience, could lead to new therapeutic options for people with disorders in interhemispheric communication.

The distribution of specific functions between the left and right hemispheres of the brain is a fundamental neuronal organisational principle. Sound processing is the responsibility of the so-called auditory cortex, which is located in both hemispheres of the brain and divides the workload: speech is processed mainly in the left cerebral hemisphere and music in the right hemisphere. This specialisation is based, among other things, on certain acoustic-physical parameters of speech and music: rapid temporal changes in the beginnings of words and sentences or continuous changes in the pitch of musical melodies.

In a comprehensive study, the team led by Prof. Dr. Eike Budinger from the LIN was able to show that not only the two hemispheres of the brain themselves, but also their interaction are significantly involved in learning acoustic parameters that underlie the specialised processing of speech and music.

First author Dr Katja Saldeitis from the DPZ trained Mongolian gerbils, whose hearing is relatively similar to that of humans, to discriminate sound stimuli with descending or ascending pitch. “Mice with intact connections between the auditory cortices of both hemispheres learned this task within a few days. Mice with impaired interhemispheric connections took much longer to do so and were not as successful as healthy mice in the end,” Saldeitis describes.

However, if the interhemispheric connections were deliberately interrupted in the healthy animals after learning, the performance of the mice in this task was still not impaired. At the same time, the recognition and discrimination of short temporal changes in the sound stimuli, such as pauses, was not impaired by disturbed interhemispheric connections.

In perspective, the present study provides important clues for the treatment of disorders of acoustic interhemispheric communication, such as those that occur in schizophrenia, dyslexia and tinnitus. Budinger assumes: “These symptoms could perhaps be treated by targeted acoustic training programmes that strengthen alternative processing pathways anchored in deeper brain structures or only one hemisphere.”